He labels coaches as ‘unprofessional’ 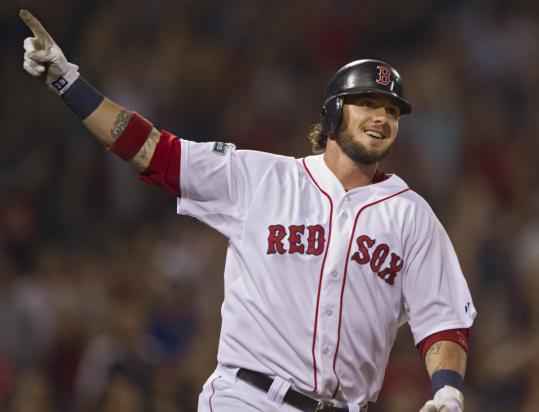 While it appeared that players’ tempers had simmered down following Friday night’s benches-clearing incident after Franklin Morales hit Rays designated hitter Luke Scott on the leg with a fastball, Bobby Valentine seemed to inflame the situation when he fired back at Joe Maddon, who called out the Sox in a Twitter message following Friday night’s 7-4 Tampa victory.

The Rays manager wrote: “Very proud of our effort 2nite. What occurred in the 9th reeked of intent. Was ridiculous, absurd, idiotic, incompetent, cowardly behavior.’’

Valentine initially balked at responding, but he later lashed out at Rays staff.

As for Maddon’s staff?

“They seemed very immature and out of control,’’ Valentine said. “Coaches are supposed to stop those things from happening and their coaches were aggravating, agitating, and instigating the situation.’’

Asked if he had plans to talk with Maddon Saturday, Valentine replied, “Don’t think so. I didn’t yesterday . . . But I like Joe.’’

Although he chose not to engage Valentine directly, Maddon seemed to take a veiled shot at the Sox manager and his staff in the way he repeatedly emphasized his respect for the Sox players.

“I definitely want to put out there how much respect I do have for the Boston Red Sox players,’’ he said.

Maddon had no reaction to Valentine’s comments.

“No, I think if you just rewind the tape, everything is pretty much self-explanatory.’’

When asked if he planned to deliver his lineup card to the umpires before Saturday night’s game, Valentine, who seemed to get away from the practice, said he had no plans to do so. He indicated he would have bench coach Tim Bogar continue handling the duties.

Then, after pondering it for a while, Valentine reconsidered. “You know what? I think I might do it,’’ he said. “Just to take the temperature [of the situation].’’

For the record, Bogar delivered the lineup to Rays third base coach Tom Foley without incident.

In the right spot

With rookie Will Middlebrooks back in the lineup at third base, and Kevin Youkilis at first, Gold Glove first baseman Adrian Gonzalez started in right field.

Gonzalez, who had never played the position at Fenway, did some pregame work with assistant Alex Ochoa, taking grounders off the wall in an attempt to familiarize himself with the nooks and crannies.

“I think Adrian’s as capable as anyone,’’ Valentine said, when asked if he had any concerns about Gonzalez being able to handle the crazy bounces that can occur at Fenway. “But for sure there could be some balls that go over into Pesky’s corner there and go out into the triangle that can elude him.

Valentine doesn’t believe there is an added injury risk to Gonzalez playing out of his natural position.

“Unless they hit a couple of balls that bounce around. I don’t think there’s injury risk, talking to him,’’ the manager said. “I think it’s more dangerous at first base as far as injuries. I see more people getting hurt playing first base than right field.’’

Gonzalez didn’t field a ball in his six innings in right.

But having to play Gonzalez in right to keep Youkilis and Middlebrooks in the lineup likely is a day-to-day situation.

Ryan Kalish, who started the season on the disabled list while he continued his recovery from offseason left shoulder surgery, reported for his first rehab start with Single A Salem Saturday night and joined the team in Frederick, Md., where he went 2 for 4 with a home run and a single as the designated hitter.

“We’ll take it one little step at a time,’’ Valentine said. “But it’s good to have him back on the field.’’

Kalish played 53 games with Boston in 2010, hitting .252 with four homers and 24 RBIs. He started out in Triple A Pawtucket last season, but his season took an unfortunate turn in April when he injured his shoulder on a diving catch and rehabbed the injury until August before neck pain forced him to shut it down after hitting .209 in just 22 games in Pawtucket.

He wound up having surgery for a torn labrum in his shoulder in November and started this season in Fort Myers, Fla., where he rehabbed in extended spring training.

Rich Hill entered in the ninth and picked up the win when Jarrod Saltalamacchia belted a two-run, pinch-hit homer in the bottom half.

Hill threw a scoreless inning, allowing Ben Zobrist to reach on a one-out walk, before inducing Luke Scott to ground to first and Drew Sutton to ground to the mound. “Josh [Beckett] pitched great and Kelly [Shoppach] did a great job back there, it was a lot of fun,’’ said Hill, who recorded his first win since Sept. 14, 2010. “We’ll just keep going and wherever and whenever I’m asked to pitch, just to be ready.’’

Outfielders Carl Crawford (left wrist/elbow) and Ryan Sweeney (concussion) gained medical clearance to begin taking swings Saturday. Crawford, who underwent an exam Friday, began hitting off the tee later that day. “He said he was excited and feeling good,’’ Valentine said. Sweeney, meanwhile, started slowly, taking swings in the batting cage. It was his first baseball activity since passing an MLB-mandated neurological test . . . Darnell McDonald, who was placed on the 15-day DL with a strained right oblique May 13, was back in the clubhouse Saturday after completing his first rehab assignment, playing five innings in left field for Pawtucket Friday night. McDonald went 0 for 1 with a sacrifice fly. “It was definitely a productive day,’’ said McDonald, who will make another rehab start Sunday, playing seven innings in Pawtucket before graduating to nine innings Monday. “I was able to see some pitches, get the barrel on the ball, and felt good about all my swings.’’ . . . Daisuke Matsuzaka threw five scoreless innings with one walk and two strikeouts on 58 pitches (38 strikes) in a rehab start for Pawtucket Saturday . . . Hall of Fame catcher Carlton Fisk, sporting green sneakers in honor of the Celtics, threw out the first pitch to Saltalamacchia.