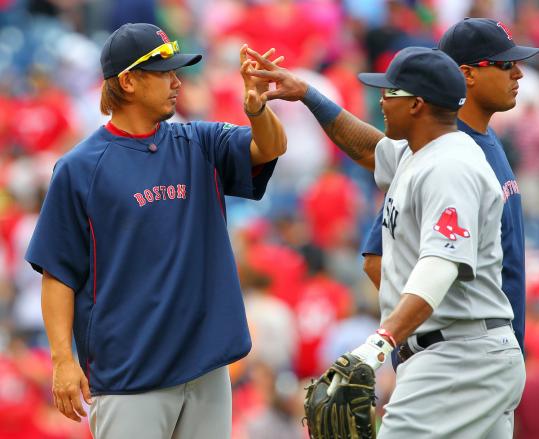 Daisuke Matsuzaka (left) congratulates Marlon Byrd after the Red Sox registered the final out in a 5-1 win over the Phillies. (Rich Schultz/Getty Images)
By Peter Abraham Globe Staff / May 21, 2012
Text size – +

PHILADELPHIA - Daisuke Matsuzaka will not be returning to the Red Sox any time soon.

The righthander, whose minor league rehabilitation assignment was due to end Wednesday, has been shut down because of pain in his right trapezius muscle, located in the upper back. Matsuzaka received an injection Sunday.

“That’s been nagging him for quite a while and we’ve got to make sure that that’s 100 percent before he’s going out there again,’’ manager Bobby Valentine said. “I talked to him [Saturday] about it being sore. He said he would maybe pitch through it. They examined him and didn’t think it was wise.’’

Matsuzaka has pitched in five minor league games with mixed results, giving up 13 earned runs on 25 hits over 25 1/3 innings. He has walked six and struck out 22.

Matsuzaka had Tommy John elbow surgery last June and appeared to be progressing well before this setback. He will remain with the Red Sox to receive treatment and it is unclear when he will start pitching again.

The development saves the Sox from having to find a spot for Matsuzaka in their rotation.

The Sox did not have outfielders Cody Ross or Ryan Sweeney available in Sunday’s 5-1 victory against the Phillies.

Ross is out with a sore left foot, the result of a foul ball that struck him Friday night. Sweeney wrenched his neck and suffered a mild concussion when he made a spectacular diving catch in the seventh inning Saturday night.

Ross was walking normally Sunday and is hopeful of playing against the Orioles Monday night.

“Oh yeah, absolutely. My main goal is to be in there tomorrow,’’ he said.

Valentine didn’t intend to use David Ortiz at first base and Adrian Gonzalez in right field for a second straight game. But the absence of Ross and Sweeney helped lead to that.

Gonzalez caught the only ball that came his way, a line drive in the fourth inning. Ortiz made several adept plays, including a backhanded stop down the line. Though Ortiz came up as a first baseman, he plays there only a few times each year.

Valentine was thankful the veterans were willing to play out of position.

“I appreciate [Gonzalez] 1,000 percent and David putting the glove on to go play first base,’’ he said. “Neither of them signed up for that, obviously. But they’re willing to do whatever it takes and I appreciate it.

“Adrian is always in the game. He’s thinking of anything and everything he can do and we can do to be as good as we can be. His attitude is really appreciated.’’

Lin was with the team for one day previously this season, playing an inning in the field April 14. The defensively gifted center fielder was hitting .256 for Pawtucket.

Jacoby Ellsbury, out since April 14 with a partially dislocated right shoulder, is not close to returning.

“I don’t know if I can give you a timetable,’’ Valentine said. “Talking to him [Saturday], he said he was feeling really good. He was doing a lot of weightlifting work and [the trainers] thought maybe he was getting even too strong, that he should take a little step back.’’

Valentine said he had no idea when Ellsbury would start baseball-type activities.

The Sox are being cautious with Kevin Youkilis on his rehabilitation assignment. He had Sunday off after playing seven innings for Pawtucket Saturday night. Youkilis has been with the PawSox for four games and played in two of them. He is scheduled to play Monday at Norfolk, Va., and could join the Red Sox as soon as Tuesday. “If he feels good after the game, I don’t see any reason why not,’’ Valentine said. “It’s on him. If he wants another couple of at-bats, or needs anything.’’ . . . The Red Sox hit nine home runs in the three-game series and scored 16 runs . . . Mike Aviles has hit safely in six straight games (10 for 25), with seven extra-base hits and six RBIs.