Injuries take out Saltalamacchia and Ross 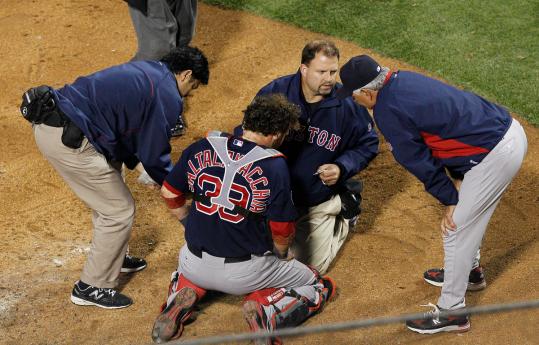 Jarrod Saltalamacchia receives medical attention after having his left ear lacerated by a ball in the fifth. The catcher left the game and got stitches. (Brian Garfinkel/Getty Images)
By Peter Abraham Globe Staff / May 19, 2012
Text size – +

They had plenty to talk about.

Catcher Jarrod Saltalamacchia was at a local hospital getting his left ear stitched up after being struck by a ball in the fifth inning. Right fielder Cody Ross had been taken for X-rays after fouling a ball off his left foot in the eighth inning. He had to leave the game.

Ross appears to be the major concern. He was limping after the game and was hopeful he would miss only a few days. He finished the at-bat after the ball struck the top of his foot but he couldn’t run afterward.

Ross said his X-rays were sent back to Boston to be evaluated.

Ross was 2 for 3 with a home run and a double. It was the eighth home run of the season for Ross and the fifth of his career against Cole Hamels. No player has more against the Phillies lefthander.

The sellout crowd of 45,205 at Citizens Bank Park booed Ross throughout the game, mindful of his MVP performance in the 2010 National League Championship Series.

Playing for the Giants, who went on to win the World Series, Ross hit three home runs and drove in five runs against the Phillies. Counting postseason games, Ross is 31 of 85 (.365) with 10 home runs and 15 RBIs in his last 25 games in Philadelphia.

Daniel Bard’s wildness cost the Red Sox their catcher. Bard hit Ty Wigginton with a fastball in the fifth and the ball deflected off the left side of Saltalamacchia’s head.

Saltalamacchia fell facedown in the dirt and was attended to by Jameyson before walking off the field. Kelly Shoppach replaced him.

“He has a pretty good laceration of his ear, they’re checking for all that concussion stuff,’’ Valentine said.

Bard spoke to Saltalamacchia and said he seemed OK.

Will Middlebrooks had eight extra-base hits and drove in 11 runs in his first eight games with the Red Sox. His OPS was 1.066.

“Let’s be honest,’’ the rookie third baseman said before Friday night’s game against the Phillies. “I wasn’t going to keep that up.’’

But instead of gradually tapering off, Middlebrooks plunged. After a 1-for-3 showing in the series opener at Citizens Bank Park, he has five hits in his last 26 at-bats and 13 strikeouts. The skid has dropped his batting average to .262.

“It’s not like I’m being overmatched, I’m having one of those days for a couple of days,’’ Middlebrooks said. “It happens in baseball. You can’t worry about it.’’

Middlebrooks doesn’t feel there’s a hole in his swing that’s getting exploited or some other weakness that opposing scouts have uncovered. In his mind, it’s more a matter of having his patience tested.

“If they find a way they can beat you, you’re going to keep seeing it until you prove them wrong,’’ he said. “The best way to respond is not to change anything, stick with your approach and grind it out. I have to have faith in what got me here.’’

That’s been the message from Middlebrooks’s veteran teammates, too.

“They tell me not to change anything,’’ he said. “We talk about hitting all the time. But nobody has told me to change what I do.’’

“Crashing towards some mean. When you’re so hot, you’re going to eventually cool and hit your level,’’ he said.

Kevin Youkilis made his second appearance with Pawtucket Friday night, going 1 for 3 with a single and playing third base before being replaced by a pinch hitter in the sixth inning. He is expected to be with the PawSox through the weekend.

Youkilis, who is on the disabled list with a strained lower back, went 1 for 2 with a walk Wednesday in his first game, as the designated hitter.

Daisuke Matsuzaka felt good about his outing for Pawtucket on Thursday night because he pitched into the seventh inning and threw 95 pitches against Durham. He allowed five runs (four earned) on seven hits, two of them home runs.

“There was only one pitch that got away, the three-run homer. Other than that, I felt really good and really confident out there,’’ Matsuzaka said through interpreter Jeff Cutler. “My line does not look as good as I felt.’’

Matsuzaka is set to pitch for the PawSox again Tuesday at Norfolk. His 30-day rehab assignment will end the next day. Matsuzaka feels he’s close to returning to the majors after Tommy John surgery.

If Matsuzaka is not deemed ready after Tuesday, the Sox could extend his stay on the disabled list with the approval of Major League Baseball.

Phillies manager Charlie Manuel was suspended by the commissioner’s office for one game after a run-in with umpire Bob Davidson Tuesday. Bench coach Pete Mackanin filled in Friday night for Manuel.

The Sox interviewed Mackanin during their search for a manager last fall.

“I guess they thought a penalty was in order,’’ Manuel said. “I have to be accountable.’’

Davidson also was suspended for one game. MLB said in a press release that it was for, “repeated violations of the Office of the Commissioner’s standards for situation handling.’’

Nick Punto got his 2011 World Series ring before the game. Former Cardinals manager Tony La Russa presented it to him in the Red Sox dugout. La Russa is now with Major League Baseball . . . Fox Sports reported that free agent righthander Roy Oswalt threw bullpen sessions for the Sox and Phillies last week and would throw for more teams in the coming days. Oswalt, 34, who rejected offers from the Red Sox before spring training, was 9-10 with a 3.69 ERA in 23 starts for Philadelphia last season . . . When Franklin Morales allowed a home run to Freddy Galvis in the eighth inning, it snapped his streak of 23 road appearances without allowing a run dating to June 28, 2011 against the Phillies . . . Hamels is 4-0 with a 1.97 ERA in five career starts against the Red Sox . . . Bard went hitless in his first two career plate appearances. He grounded to shortstop and struck out.