This Ross ‘pop out’ really hurt 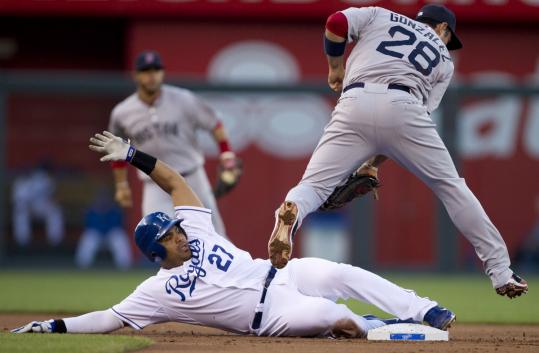 Ross tracked the ball down and stabbed it out of midair, and he took 2 1/2 steps on the warning track before slowing to brace himself from crashing into a chain-link fence along the outfield wall at Kauffman Stadium.

When the ball popped out of his glove and he bobbled it, gathering it in after it had bounced off the fence, Ross thought it was the end of an inning full of adventure.

“When it happened, I really didn’t think anything of it,’’ Ross said. “When I saw it pop out, I kind of grabbed it and expected to run off the field.’’

But when Ross turned and saw shortstop Mike Aviles frantically waving at him to throw him the ball, he didn’t know what to think. Little did he realize that his momentary fielding gaffe would cost the team two runs. Coupled with center fielder Marlon Byrd’s misplay of a fly ball by Johnny Giavotella the play before that led to a run, the Royals grabbed a 3-0 lead in an eventual 4-3 win over the Sox.

Over the heated objection of Sox manager Bobby Valentine, third base umpire Chris Guccione ruled that Ross did not have control of the ball, meaning Pena’s hit went for a double that scored Jeff Francoeur and Giavotella.

“I thought he caught it,’’ said Sox starter Jon Lester, who was charged with three runs on two hits, one walk, and one error (by Byrd) in a protracted 38-pitch first inning. That after he was quick to retire the first two batters he faced.

“I obviously don’t understand the rule, but I felt like he had possession of it for three or four steps,’’ Lester said. “I don’t know how many steps you have to have to control the ball, if you have to run it all the way into the dugout for it to be a catch, I don’t know.

“I felt like he caught it. But like I’ve always said, I think every pitch is a strike and I think every time someone makes a play, they’re out. That’s just me being biased.’’

“I thought he had it,’’ said Byrd. “He had two steps after and I really couldn’t see because his back was turned to me, then it popped out and then he caught it. I think it hit the wall.’’

Byrd said Ross never would have been put in that position if he hadn’t misplayed the fly ball Giavotella hit toward him.

Byrd charged the ball, but then it seemed to elevate on him.

“Yeah, it took off,’’ Byrd said. “I went across for it and thought I could get up high enough. It tipped the inside of my glove and just bounced out. It’s just one of those things where I’ve got to make that [catch] and end the inning. But it kept on going from there.’’

Ross said he tried to seek out an explanation from Guccione.

“He said when you catch the ball you have to maintain control or on the exchange, so that was the ruling,’’ Ross said. “It was a tough call for him. I haven’t seen the replay, but it ended up being a huge play for them.

“I guess he felt that I didn’t have it long enough. I’ve caught balls in the air and [bobbled it] on the exchange really fast and it was a questionable call, but nothing like that.’’

Asked if he was astonished by the end result, Ross replied, “Yeah, I mean they scored two runs - two big runs right there. I catch the ball and we’re out of the inning and it ended up being a big inning for them, but it happens.’’