Not what Valentine envisioned

Ventura a leader in a different way 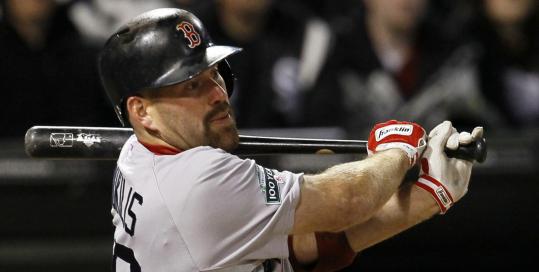 CHICAGO - Bobby Valentine has managed many players he thought would one day become managers themselves. But Robin Ventura, the first-year skipper of the White Sox, was not one of them.

Ventura played 16 years in the majors, including three years with the Mets (1999-2001) when Valentine was manager. Valentine said Ventura was one of his personal favorites but the two had a falling out when the Mets traded him to the Yankees for David Justice.

It proved to be a bad move for the Mets. Ventura drove in 93 runs for the Yankees in 2002 and was an All-Star. Justice was flipped to Oakland for two relievers.

Ventura, who has since mended fences with Valentine, said he learned a lot from him. “He’s smart,’’ said Ventura, who replaced Ozzie Guillen in Chicago. “He knows a lot of things. He sees a lot of things that go in the game that, in one way or another, can be improved.

“He’s just been around. He learned a lot from the guys. He’s willing to experiment with different things - defensively, lineups, and just about everything.’’

Ventura believes Valentine should be himself with the Red Sox and not change his style.

“I know, for me, I can’t try to be something else,’’ Ventura said. “He’s been successful before. When you hire him, you have to trust what you’re hiring.’’

After talking a bit about Ventura, Valentine said that when he was a player, he asked a lot of questions to certain managers he had, particularly Alvin Dark, Tommy Lasorda, and Joe Torre.

“Some guys, I didn’t want to talk to them,’’ Valentine said. “They would realize I was there and release me. I wanted to make sure they didn’t know I was on the team.’’

Cody Ross, who twisted his left knee Wednesday against the Twins, was out of the lineup Thursday night against the White Sox. Lars Anderson started in left field in the Red Sox’ 10-3 victory.

“[Ross] came in and we talked,’’ said Valentine. “If tomorrow was an off day, he would probably have played today. But it’s not an off day, so no need to make anything worse. We try and see if we can put a small issue in the rearview mirror.’’

Ross felt a little twinge in his knee in the second inning and left the game in the sixth.

“I could play if I had to,’’ said Ross, who was wearing an elastic brace on the knee. “We’re just being careful. I want to play tomorrow. I’m fine.’’

The Red Sox used Anderson, preferring a lefthander hitter against White Sox righthander Philip Humber. Anderson, who caught the only ball hit his way, has been a first baseman throughout his career outside of a few games in spring training and four games with Pawtucket.

But Valentine was willing to take the chance.

“I’ve watched him now for four days,’’ said the manager. “He’s good off the fungo. The reports on him are that he caught everything that was hit to him when he played [in Pawtucket].

Anderson came up three times - once leading off, and twice after Jarrod Saltalamacchia homered - and went 0 for 3 before being replaced by Darnell McDonald.

Looking to the left

Valentine said it was conceivable that lefthanded reliever Rich Hill could join the team before the weekend is out. Hill has appeared in eight minor league games on his rehab assignment. His return would give the Red Sox a specialist to use against lefthanded batters. The Sox have two lefthanders in the bullpen. Franklin Morales has become one of the primary set-up men, with Valentine willing to use him against righthanded hitters. Rookie Justin Thomas has struggled, putting 13 of the 25 batters he has faced on base. He has a 7.71 earned run average.

The Red Sox broke out their winter parkas for the game and had a heater in their dugout. It was 39 degrees at game time, with the wind at 11 miles per hour . . . The name plate above Scott Atchison’s locker read “Atchinson.’’ The reliever hopped up on his chair and erased the extra letter . . . When Minnesota’s Danny Valencia homered off Jon Lester Monday night, the ball sailed into the Red Sox bullpen, deflected off a railing, and hit Alfredo Aceves in the back of the head. Ross informed MLB Network’s Chris Rose of the unusual play, and it popped up on television Thursday afternoon, much to the delight of the other players. Even Aceves was grinning . . . Marlon Byrd, who spent just over two years with the Cubs before being traded to the Red Sox, is staying with his family while the team is in town. Byrd’s wife, son, and daughter are living in Chicago until school gets out.