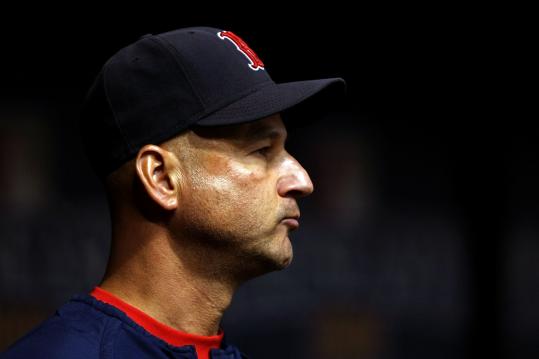 Don’t look for former manager Terry Francona at Fenway Park when the Red Sox celebrate the 100th anniversary of their beloved ballpark a week from Friday against the Yankees. Francona is still smarting from the way things ended between himself and the Red Sox after the collapse of 2011.

“Somebody went out of their way to make me look pretty bad,’’ Francona said, referring to a story by the Globe’s Bob Hohler that cited unnamed club sources expressing concerns that Francona’s job performance may have been affected by his use of pain medication. “It’s a shame. I’m sure they’ll have a great event and I was part of a lot of that stuff there, but I just can’t go back there and start hugging people and stuff without feeling a little bit hypocritical.’’

Responded CEO Larry Lucchino Tuesday: “I understand how strongly he feels on this matter and I accept that.’’

Francona was let go two days after the Sox bowed out of playoff contention Sept. 28, losing their final game in Baltimore. Two weeks later, the Globe published an explosive story (“Inside the collapse”) questioning the manager’s professionalism and revealing a deteriorating clubhouse culture that included pitchers Josh Beckett, Jon Lester, and John Lackey eating fried chicken, drinking beer, and playing video games while their teammates struggled on the field late in the season.

The Sox have invited every living ex-player and manager back for the ballpark’s centennial celebration, but Francona rejected the offer in a phone call with owner John Henry last month, and again Monday when Lucchino called.

“Larry called me yesterday,’’ Francona said Tuesday. “I was in a phone store in Arizona. I had three people standing around me. I was at a little bit of a disadvantage. He got a little perturbed at me, telling me I was being unfair to them. I called him back last night and left him a message. He called me back and we ended up getting into an argument. I just feel like someone in the organization went out of their way to hurt me and the more we talked I realized we’re just not on the same wavelength. They’re probably better off going forth and leaving me out of it.’’

After his contract was not extended at the end of last season, Francona attempted to reach Henry for several weeks, but his phone calls were not acknowledged. When Henry read about this, he called Francona and the two finally spoke in late February (“I thought it was five months too late,’’ said Francona). In that conversation, Henry invited Francona back to Fenway for the April festivities, but the ex-manager declined.

“Until I’m more comfortable with some answers on what happened at the end of the year, I don’t want to have much to do with the organization and that’s a shame,’’ Francona said Tuesday. “With all the good things that were accomplished, I just feel pretty strongly about that.

“It was pretty raw at the end of the year. I think I’ve done a pretty good job of moving on from that. At the same time, I’m never going to forget that. For me to go back and start waving and hugging, I’m just not comfortable doing that. I made it pretty clear to John Henry.

“When I spoke to John he made me think they were going to make an effort. John and Larry made it clear to me they weren’t responsible for what was said [in the Globe article]. I thought they owed it to me to get to the bottom of it a little bit.’’

Francona is employed as a baseball analyst for ESPN and worked the Red Sox opener in Detroit last week.

“That’s a hard one,’’ he said. “The only two games I’ve watched are the opener in Detroit and one spring training game. You can’t root when you’re announcing. For me, it’s going so fast right now, I’m just trying to do my job. There is no way you can be around people for eight years and not have loyalties that will never end. I want Pedroia to hit 1,000. I want Jon Lester to win every game he ever pitches. That’s kind of the shame of it. But I’m also not comfortable coming back. That’s the shame of it. It’s not a vendetta. I just don’t feel comfortable coming back because of what happened and that’s a shame because I do feel awfully strong ties to so many people there.’’

Dan Shaughnessy is a Globe columnist. He can be reached at dshaughnessy@globe.com. He is working on a book with Terry Francona on Francona’s career as Red Sox manager.