Pedroia does job, and to the letter 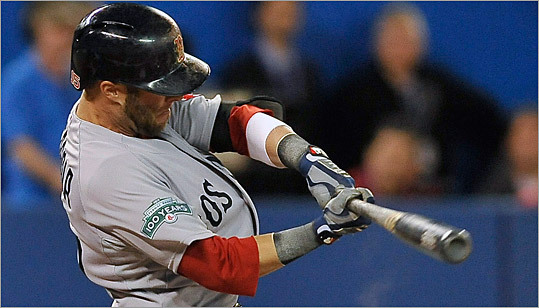 Dustin Pedroia had a home run, a double, and scored the tying run in the ninth inning as the Red Sox came from behind. (Brad White/Getty Images)
By Nick Cafardo Globe Staff / April 10, 2012
Text size – +

TORONTO - There is no Red Sox player wearing the “C’’ on his jersey anymore. That became the case when Jason Varitek called it a career late in March at JetBlue Park in Fort Myers.

But that doesn’t mean the team has no leadership.

That’s because Dustin Pedroia is wearing his No. 15, as proudly as any Red Sox ever has worn it.

It is times like these when one can witness that leadership and realize that if there was another “C’’ given out, it would be to Pedroia, small in stature but with a big heart.

He wouldn’t say it, but last September killed him. You knew he thought about the Red Sox’ collapse all winter. And you knew that when this season started 0-3, he was fuming inside. He’s one of those players who is eaten up by losing, but he tries to put forth a confident, determined demeanor.

It’s easy to say it and think it, it’s another thing to execute it. And Pedroia executed it with two huge hits in a 4-2 Red Sox win over the Blue Jays at Rogers Centre.

Oh, Pedroia had plenty of help, with Scott Atchison’s three scoreless innings of relief, Felix Doubront’s five quality innings at the start, and Alfredo Aceves’s first save after as hideous a beginning as you’ll ever see from a guy who was just named the closer.

Pedroia homered in the sixth off Toronto starter Henderson Alvarez to cut Toronto’s lead to 2-1. And then in the ninth, still down a run, Pedroia slaughtered a high fastball from Sergio Santos and sent it flying to the left-center-field gap off the wall. The ball bounced true to the outfielder, but no matter - Pedroia had it in his mind he was going to go for two. The play was close, but he made it.

Of course he did.

“I don’t know, hopefully it sparked us,’’ Pedroia said of his big hits. “I’m just trying to put good at-bats together during the season. It’s hard to settle down and find your rhythm. They have some good pitching. Their starter was pretty darned good. It worked out for us.’’

And somehow manager Bobby Valentine knew Pedroia would be in the middle of it.

Valentine said when he arrived at the ballpark at noon for a 7:30 p.m. game, he had no idea that anyone would be in the clubhouse.

“I don’t have enough words to talk about Pedroia because I came here at 12 and figured nobody would be here and he was already here, pacing, and said, ‘We have to get the monkey off our backs,’ and, ‘Let’s go,’ ’’ said Valentine. “And he gets a high slider and hits one to the seats. He gets a high fastball and starts a winning rally with a double. He’s a great player.’’

What a spark Pedroia was.

He seemed to get everyone going.

David Ortiz probably shouldn’t have tried to steal second base in the seventh down a run (he was out), but Pedroia thought it was a great play. As Valentine explained, when the opposition is playing behind Ortiz, who is moving pretty well these days, he should try to steal a base. That will make teams play on the bag and open up holes for the hitters.

“I thought it was great,’’ Pedroia said. “He had a good read. J.P. [Arencibia] made a heck of a throw from his knees and put it on the base like that. That was an unbelievable throw.’’

Pedroia and the Sox knew they were going up against a buzz-saw in Alvarez. He’s one of the top young pitchers in baseball, and when he has control, which he did Monday night, he’s pretty devastating. But the Sox were able to get his pitch count up and got him out of the game.

“We’re going to come out every day and play hard to win,’’ Pedroia said. “We had a couple of tough ones in Detroit but we’re going to play hard every single night.’’

Pedroia wouldn’t admit to his frustration being at its height, but one could sense it was.

“No, I mean we’ve had some tough times here with the end of last year and the first couple of games,’’ he said. “You just have to stay with it and grind it out. There are 162 games. If you stay with it and think positively we’ll be all right.’’

And so Pedroia decided he was going to let it all ride Monday night.

On the homer, Pedroia said he thought he needed to prevent Alvarez from getting ahead in the count, so he wouldn’t throw his slider, “because if he gets ahead of you and he gets to his slider, that’s the end. I was trying to get a good pitch, and he got one close to me.’’

What went into his decision to go for a double as soon as he hit the ball in the ninth?

“I hit it hard and it kicked off right to him [outfielder Eric Thames],’’ he said. “If I’d have gotten thrown out, that would have been my frustration level.’’

For one night, anyway, the music was blaring inside the clubhouse. Players were upbeat. Adrian Gonzalez walked by Pedroia and said, “There’s our Sparky.’’

Atchison knew the team really needed to win and said Pedroia no doubt provided the spark that was needed.

The storm was over, at least temporarily.

The manager didn’t have to answer questions about who his closer was going to be. He didn’t have answer queries about bullpen roles, or the general “woe is us’’ feeling.

But Pedroia wasn’t completely buying that things were all better. At least he wouldn’t let himself think that way.

“Not really,’’ he said. “We have to come out tomorrow and play. We’d better play the game the right way.’’

Because watch him day in and day out, and you see the way the game should be played - whether he wears a “C’’ or not.