Stretched out, Bard finally gets his start 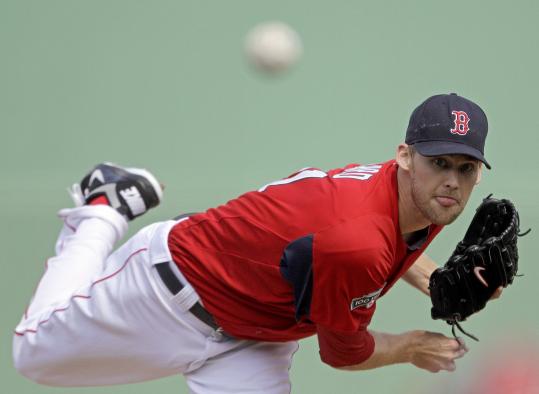 The Red Sox saw enough improvement and potential in Daniel Bard this spring to make him the No. 5 starter. (David Goldman/Associated Press)
By Peter Abraham Globe Staff / April 10, 2012
Text size – +

TORONTO - Daniel Bard is the only player on the Red Sox roster yet to get into a game this season. But he has been at the center of attention.

His switch from the bullpen to the rotation was the subject of much discussion when the Sox made that decision over the winter. Then it became a fierce debate when closer Andrew Bailey was lost to a thumb injury that required surgery.

The subject came to a boil over the weekend when the Bard-less bullpen imploded against the Tigers as the Red Sox were swept in the three-game series.

So far, the Sox have maintained their faith in the idea that Bard belongs in the rotation. He will make the first start of his career Tuesday night, facing the Blue Jays and Kyle Drabek.

“Considering he’s probably been the guy who’s been talked about the most the first three games and he hasn’t thrown a pitch yet, I’m dying for him to throw a pitch,’’ manager Bobby Valentine said Monday.

Valentine has spoken to Bard about maintaining his focus as outsiders ponder what role he should have.

“We’ve talked and he gets it,’’ Valentine said.

“Poor guy has been thrown into a situation that no one should have to be thrown into, really, before his first major league start of the season. Words aren’t going to do anything more than his performance will, that’s for sure.’’

Bard was erratic in spring training, allowing 18 earned runs in 24 2/3 innings. But the Sox saw enough improvement and potential to make him the No. 5 starter.

“We made a decision this winter collectively to give him a chance to get stretched out in spring training and show us what he can do,’’ general manager Ben Cherington said to MLB Network Radio. “We feel like he showed enough in spring training, enough development, to carry that into the season. If he can do that and do it well, and we believe he can, then there’s a great long-term benefit to the organization.’’

Bard, 26, was one of the premier setup men in the game for three seasons. He had a 1.05 WHIP and averaged 9.7 strikeouts per nine innings. But he never lost the desire to start.

“Lot of work in to get here. The opportunity finally presented itself and I’m excited about it,’’ he said.

“It’s something I always thought I could do once I proved to myself I could consistently get hitters out at this level.’’

Bard has 24 1/3 innings of experience against the Blue Jays, more than any other team. He knows their lineup well and is confident.

He also is well-rested. Bard said the biggest change in being a starter is the lack of stress compared with working out of the bullpen.

“It’s a lot easier to sleep at night when you didn’t just pitch the eighth inning of a game or warm up. You get that adrenaline flowing at about 10:30 at night it makes going to sleep a lot harder,’’ he said. “From that respect, it’s been nice.’’

Bard said it’s “not fair’’ to judge the bullpen on a handful of games. He also passed on a question about what his role should be.

Said Cherington: “It’s way too early in the season to talk about changing roles or reacting off a three-game series. Ultimately, of course if things are not working as we get deeper into the season, we’ll consider changes.’’

So it was a bit unusual to see him taking off for second with the Red Sox trailing, 2-1, in the seventh inning with one out.

J.P. Arencibia made a strong throw and Ortiz was out on a close play.

First base coach Alex Ochoa has been working with Ortiz on stealing second because teams usually don’t hold him on. Now they need to work on their timing.

“A one-run game in the seventh inning is a little, um, dicey I’d say,’’ Valentine said.

“But it’s going to get guys to hold him on base and create a hole for guys behind him.’’

Said Ortiz: “Did you think I was safe? It was close. I thought I had it.’’

Valentine tried to shoulder some blame for the bullpen woes before Monday night’s game against Toronto. Sox relievers allowed 10 earned runs in their first 11 1/3 innings of the season.

“I’ve just got to manage it better, that’s all I think,’’ he said. “I think we’ve got the arms out there to do what we have to do. Just get the guys in the right position to do it. Just manage better. I will. I don’t think the deck has to be totally shuffled.

“I just have to get the right guys matched up. Give me a little more time and I think I’ll be able to do that. There’s a lot of information. Trying to get all the information in there.’’

Alfredo Aceves allowed three runs in the ninth inning against Detroit Sunday. Then Mark Melancon did the same in the 11th inning as the Sox lost, 13-12. Alex Avila’s two-run homer won the game for the Tigers.

“I talked to Alfredo [Sunday] night,’’ Valentine said. “Everything happened too quickly. He thinks he’s making pretty good pitches. I do, too. Mark was pretty close to finishing that out. Ball wasn’t that bad a pitch. Got to have a little better results and I think we’ll have that.

“I’m not very patient. [But] I believe in my guys. As long as they’re wearing my uniform, I believe in them.’’

Cherington said he has been speaking to Valentine daily about the issue.

“There’s plenty of talent down there,’’ the GM said. “We just need to execute a little bit better, maybe get a little dose of luck and those things can combine and snowball into a run of success.’’

Andrew Miller continued his rehabilitation assignment with a scoreless inning for Single A Greenville. He is coming back from a left hamstring strain. Rich Hill is scheduled to pitch for the Drive Tuesday . . . Franklin Morales has allowed two earned runs in 18 2/3 innings on the road since joining the Red Sox. He has given up 11 earned runs in 16 1/3 innings at Fenway Park. He has gone 19 appearances on the road without allowing a run, the longest streak ever for a Sox lefty . . . Matt Barnes, the team’s top draft pick last June, made his professional debut on Sunday with Greenville. The righthander from UConn threw five shutout innings, allowing two hits with two walks and nine strikeouts.