Reasons aplenty to expect no title for Red Sox 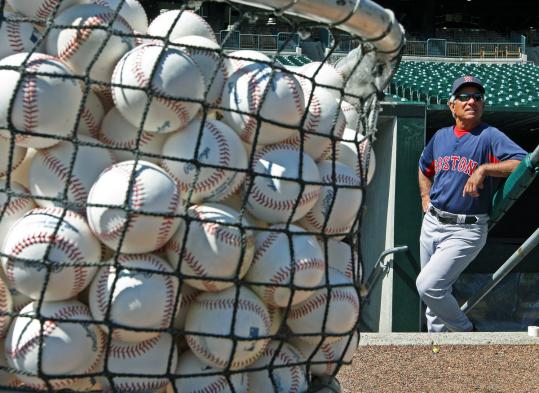 DETROIT—We traditionally overrate the Red Sox. They have the best lineup. They have too much pitching. They have great ownership. They have dedicated fans and a cozy, celebrity ballpark. This is the year. Best Team Ever. Leave calendars open for October. Strawberry Fields Forever.

Not this year. No one is picking the Red Sox to win. The Sox are careening down the dugout steps and they haven’t even played a game yet. The Red Sox this year are underdogs, hiding in the weeds while all the attention is focused on American League teams from New York, Detroit, Anaheim, Dallas-Fort Worth, and Tampa Bay.

The Sox have earned this disrespect. Royally.

September was bad. You remember. Seven and 20. Horrible starting pitching. No shows by the big thumpers in the lineup. Bullpen implosions. An unthinkable loss on the final night in Baltimore.

And then it got worse. On the heels of the worst collapse in baseball history, the wealthy Red Sox went into small-market mode. They sent the message to their fans and all of baseball that they’re done spending stupid money. They got burned on the John Lackey and Carl Crawford signings so . . . that’s it; no more. Hope you like Mike Aviles at short, Ryan Sweeney in right,and Felix Doubront at the back end of the rotation. John Henry won’t be fooled again. Go Liverpool.

Really. Did any team have a worse winter than the Red Sox? They fired the manager who won them two World Series. They let their Camelot GM go to the Cubs while he was still under contract, then received a non-prospect pitcher in return. The non-prospect wound up being damaged goods. The new GM was made to look powerless when his managerial candidate was dismissed by the owners. They let the best closer in franchise history leave without even making an offer.

The owner said he never wanted Crawford in the first place, then Crawford had wrist surgery in January, assuring that he would not be ready for Opening Day. They spent twice as much for David Ortiz as they had to spend. They dumped their shortstop because he makes too much money. They traded for an oft-injured closer, who underwent major thumb surgery the day before Opening Day.

Thank goodness they banned beer in the clubhouse.

On Wednesday, new manager Bobby Valentine told us that the Sox will be opening the season with 13 pitchers on the roster. This gives him three extra bats on the bench for the start of each game, one of them a backup catcher.

The Andrew Bailey injury is certainly bad luck. It’s nobody’s fault when a pitcher gets hurt hustling to cover first base. But the injury underscores how fragile the Sox are going into this important season.

With the second-highest payroll in baseball, the Sox have finished out of the playoffs for two consecutive seasons. They have not won a playoff game since Game 6 of the 2008 American League Championship Series. They are coming off the club’s most shocking collapse in 33years and they’ve done little to inspire confidence or optimism in a loyal fan base that loves the team almost unconditionally.

One shudders to think of what might happen if Jon Lester, Josh Beckett, or Clay Buchholz gets hurt. Beckett and Buchholz have been injured a lot over the last couple of seasons. Beckett on Wednesday sounded like a man who knows he’s going to need surgery on his right thumb, sooner or later.

Dustin Pedroia, the de facto captain of the local nine, said, ‘‘We’ll find out. We’re ready to go,ready to play hard. It’s a long year. We’ll find out what kind of a team we have through the grind of the season. I’m still confident that we’re one of the best teams in the American League. I don’tread too much into those predictions. The bottom line is that we have pretty much the same team as last year, minus one or two guys. So we need to go out there and prove that we’re the team they were talking about last year — one of the best teams ever put together.’’

The fall of 2011 is long gone. The mild winter of confusion and inaction is over. It’s finally time to play ball. Is anybody alive out there?