Pitch calls to be revealed today 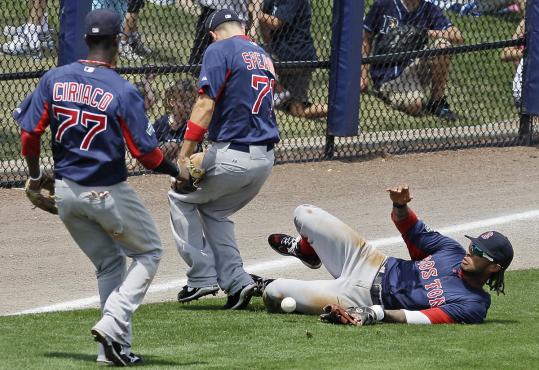 PORT CHARLOTTE, Fla. - Bobby Valentine has made his decision on the Red Sox rotation to start the season, but he won’t make it public until Sunday.

Valentine said he still has not spoken to all of the people involved about their roles.

The most popular scenario has Daniel Bard and Felix Doubront rounding out a rotation that starts with Jon Lester, Josh Beckett, and Clay Buchholz. Aaron Cook had a very good 68-pitch performance in a minor league game Wednesday and looks as if he’s ready to go north, but the Sox may hold him back, at least until the May 1 opt-out in his contract becomes an issue.

The biggest decision likely will be on Alfredo Aceves, who was told to stretch out as a starter. Except for one horrible outing against the Phillies last week, Aceves was very good in the role. But he also may be more valuable in the bullpen.

Valentine liked what he saw of Franklin Morales, who pitched 1 1/3 innings in a 7-7 tie with Tampa Bay Saturday, because Morales was able to sit down and get back up for a second inning.

“He hasn’t had much work, but he’s thrown the ball very well,’’ Valentine said.

General manager Ben Cherington said he was happy with the roster but that it was “not perfect.’’ He did not rule out a trade before the start of the season but said he didn’t expect one.

The bullpen decisions likely involve middle and long men. It appears that Andrew Bailey, Mark Melancon, Morales, Vicente Padilla, Aceves, and Matt Albers are in. Michael Bowden could be the seventh pitcher because he is out of options. It appears Doubront is on the team either as a starter or reliever.

Ross Ohlendorf started Saturday’s game, lasting 3 2/3 innings, allowing seven hits and four earned runs. He does not appear to be in the bullpen mix at this time.

Valentine indicated that the 25th spot on the roster is still up for debate and said it would be Cherington’s decision on who keeps Carl Crawford’s spot warm.

Valentine said that one year he conducted a home run competition for the 25th spot. He said one player was ex-Ranger Steve Kemp and he couldn’t remember the other. He said he told the players, “Whoever hits a home run in your next at-bat, you’re on the team.’’ Valentine recalled that Kemp hit either a home run or a double off the wall.

Ciriaco had an interesting day - playing second, shortstop, and third. He doubled and then scored from second on a slow grounder to third base by Spears, reached on a bunt single, and also committed an error at short.

Spears, who played all four infield positions, went 0 for 4 with a walk.

Gomez, who played first base, went 1 for 4 with two strikeouts and knocked in two runs with a single to right.

Repko, who manned center field, went 2 for 4, and Nava, the right fielder, stroked two hits and knocked in a run.

Valentine said he still hadn’t received the opinion of all the coaches.

Gomez, who hit .304 with 24 homers and 90 RBIs at Triple A in the Braves system last season, remains the sleeper.

“He’s shown me everything,’’ Valentine said. “The guy is a real hitter. Very calm. I like the way he swings.’’

Righty Chris Carpenter, the main compensation received for Theo Epstein from the Cubs, had surgery Thursday to remove a bone spur in his elbow. Carpenter said he could begin throwing again in 6-8 weeks.

Cherington indicated that he has talked to Epstein and Cubs GM Jed Hoyer, but wouldn’t comment on whether the Red Sox were pursuing further compensation. The team was aware of Carpenter’s elbow issues since it had access to his medical records.

Carpenter, who said he had discomfort in the back of his elbow, said there was no indication he had a bone spur before the Cubs sent him to the Red Sox in March.

“I felt great coming into spring training,’’ he said. “I felt really good. Just after the last outing, it kind of flared up a little bit. I told them and got an MRI and they looked at it and saw three big bone spurs.

“It hasn’t bothered me. I felt really good coming in here and I was excited for the season. It’s just kind of unfortunate this happened right now.’’

Lester, who will start Opening Day, threw four scoreless innings in a Triple A game against the Twins at Fenway South in Fort Myers. With Jarrod Saltalamacchia catching, Lester allowed three hits (all singles) without a walk and struck out six. Of his 57 pitches, 41 were strikes. Lester allowed two singles in the first inning, then retired 11 of the final 13 batters he faced. One reached on an error, the other on a single. Valentine and pitching coach Bob McClure were on hand to watch Lester, as were Cherington and assistant GMs Mike Hazen and Allard Baird . . . David Ortiz, Kevin Youkilis, Nick Punto, and Ryan Lavarnway also stayed back and played in the minor league games. Ortiz was 0 for 3 in the Triple A game and homered in his only at-bat in the Double A game. Youkilis was 1 for 6 with a single between the two games and Punto was 1 for 4 with a double . . . Cherington confirmed that Cook and Padilla had received $100,000 retention bonuses . . . Crawford (wrist) has progressed to live batting practice, but he will remain in Fort Myers to continue his rehab. A May 1 return is still possible.