THIS STORY HAS BEEN FORMATTED FOR EASY PRINTING
Sports media 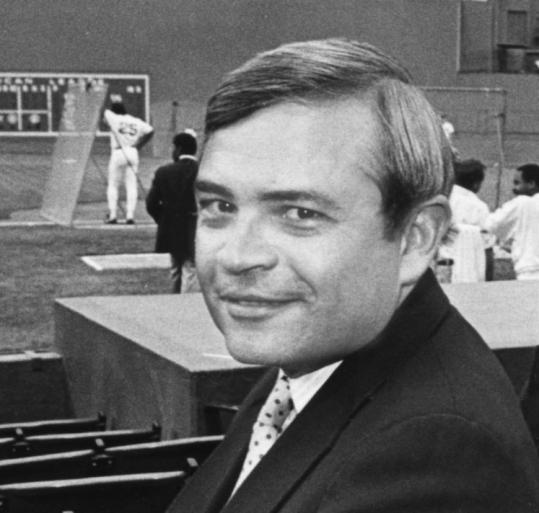 Joe Castiglione can be excused if some of the early innings have escaped from memory through the years. He has broadcast more than 5,000 major league games, achieving that milestone last season, and has been the constant in the Red Sox radio booth for more than a generation.

That’s a lot of baseball, even for someone whose enjoyment of the game hasn’t waned.

“The love is still there,’’ said Castiglione, who called Indians games for a couple of years and the Brewers in 1981 before coming to Boston for the 1983 season. “I still have fun doing it.’’

That he can instantly recite the relevant details from the first game he called with the Red Sox isn’t exactly a surprise worthy of his “Can you believe it?’’ catchphrase.

“Oh yeah, I remember a lot about it,’’ said Castiglione, “Actually, my very first game was at Fenway, when I was doing Cleveland TV in ’79. [Dennis] Eckersley pitched [for the Red Sox] and beat us. Rick Wise was our pitcher.

“And then my first game with the Red Sox was, of course, Opening Day ’83. Eckersley pitched for the Red Sox and lost to Toronto, 7-1. Dave Stieb was the pitcher. Rance Mulliniks hit a home run.

“Shortly thereafter, Eck said, ‘What’s a Rance Mulliniks?’ in his own inimitable style. And he drilled him later in that game.’’

Baseball-reference.com verifies Castiglione’s remembrances from the April 5, 1983, game, right down to Mulliniks getting his comeuppance for having the gall to take Eck deep. Other signs of how times have changed during his tenure can be found in the box score.

That season, the final one of Carl Yastrzemski’s career, was a drab one for the Red Sox, as they went 78-84.

The crowds were smaller, and the games were faster. Fenway drew 33,852 for the Tuesday opener, but after a day off, just 9,603 attended the season’s second game, which had a 12:08 p.m. first pitch. The opener was completed in 2 hours and 19 minutes. The second game took just 2:06.

“It’s all of these pitching changes now,’’ sighed Castiglione. “You never even thought about time of game then. We have one of those a year, maybe.’’

Castiglione’s second book, titled, “Can You Believe It? 30 Years of Insider Stories with the Boston Red Sox,’’ will be released this month. While it’s safe to assume it’s not going to rival Jim Bouton’s “Ball Four’’ or Dirk Hayhurst’s “The Bullpen Gospels’’ in terms of ribald behind-the-scenes tales, there should be plenty of fun fodder for Red Sox diehards.

The list includes stars (Mo Vaughn, Nomar Garciaparra) and role players (Brian Daubach, Darnell McDonald) alike. And then there is the most dazzling of all.

“Pedro Martinez is the most charismatic athlete I’ve ever seen,’’ Castiglione said. “I can’t say he’s No. 1, but he’d be right there at the top. We had a special personal bond, but just greatness - the ERA 3 1/2 runs lower than the league average.

“Everything about him was just unbelievable. He’s the best pitcher I ever saw.’’

When asked about the greatest moment he has witnessed, Castiglione first cites Roger Clemens’s two 20-strikeout games, the four no-hitters, and Daniel Nava’s grand slam on the first pitch he saw as a big leaguer (Castiglione told him in a pregame interview to swing at the first offering).

But the greatest moment? It’s as obvious as that green wall in left field.

Castiglione may not have the cachet of Ken Coleman or the eloquence of Ned Martin, and his broadcast partner for the sixth year now, Dave O’Brien, has the more classic radio voice. But through the years, as partners such as Coleman, Bob Starr, and Jerry Trupiano have come and gone, Castiglione’s voice has become as much a part of the fabric of New England summer as traffic on the Bourne Bridge.

There is comfort in Castiglione’s familiarity, the institutional knowledge he shares, and the sense that he cares about the outcome as much as you do. The suggestion that you can turn on the radio and know whether the Red Sox are winning or losing by the tone of Castiglione’s voice is not outlandish. It’s something he readily acknowledges.

“I don’t think the style is something that I developed consciously,’’ Castiglione said. “I really do care whether they win. It’s a criticism if you’re doing a network game when people tell you they can tell whether a team is winning or losing by the tone of your voice. I take it as a compliment. I think Red Sox Nation likes that.

“It happens because it is the natural thing to do. You can’t act through 3 1/2-hour games. Bob Starr used to have a saying: ‘It’s not my life, it’s not my wife.’ I know what he meant, but it’s sort of the opposite from my emotional approach. I care about the Red Sox and I’m so thankful to be able to have done it for this long.’’

He pauses and offers that quick, recognizable laugh, his voice rising.