Beckett is zeroed in against Tampa Bay 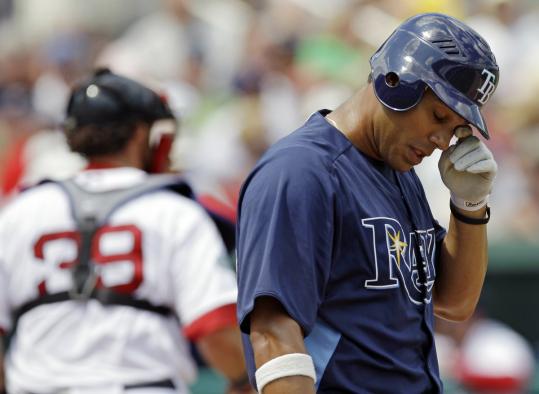 It has been a good spring for Beckett. Against major league hitters, he has given up only two earned runs and seven hits in 19 innings. Against Tampa Bay Tuesday, he walked three and struck out five. He threw 84 pitches, 49 for strikes.

“He got his work in, put up a bunch of zeroes, that’s what he needed,’’ said Sox manager Bobby Valentine.

“I think if you hit the ground running in April, you’re probably not very old,’’ Beckett said. “Spring training, in my opinion, is a little bit long. It’s to get everybody ready.

“When you’re throwing this many pitches, 85-100, your competitive stuff kind of takes over. You’re trying to get guys out and not let people score. I think the mental aspect of the game is a little different than when you’re going three innings. Maybe then you tend to work on one individual pitch.’’

Beckett walked two to open the second, then struck out Jeff Salazar and Jose Lobaton on dazzling pitches to get out of the jam. It was a 24-pitch inning.

“Obviously, you don’t want to put yourself in too many of those jams during the year,’’ said the veteran righty. “But it’s nice to pitch out of one to refresh yourself that you can do it.’’

“We’re going to score runs,’’ he said. “We proved that last year, and there’s not a whole lot of changes in our offense. The starters have to go do their thing every day. Everybody’s expected to keep the team in the game, and that’s really it.

“Everything that’s happened in the past, I think we’re ready to just go play baseball. I don’t think anybody’s taking us lightly. We’re still a really good team.’’

Beckett’s final start of the spring is scheduled for Saturday at JetBlue Park against the Minnesota Twins. He is on track for the second game of the regular season, a week from Saturday in Detroit.

Cup is up for grabs

The coveted Mayor’s Cup is on the line for the Red Sox and Twins. Their spring series is knotted at 2-2 with two games to play. Minnesota won the Cup last year and needs only a split to retain the trophy . . . Cody Ross crushed a three-run homer over the Monster in the second inning . . . Jacoby Ellsbury is batting .286 but has not homered this spring . . . Valentine used Mike Aviles (.313) in the leadoff spot and said he is considering keeping the starting shortstop at the top of the order.

The Rays started righty Fernando Rodney instead of James Shields because they didn’t want the Red Sox to have another chance to see Shields during an exhibition game (Rodney pitched one inning). The Sox didn’t have the same concerns about Beckett pitching against a division rival, but they are keeping Felix Doubront away from the Toronto Blue Jays, pitching him in a minor league game Thursday. “I think you can face a team once during spring training,’’ Beckett said. “If you know a way to get a guy out, you don’t say, ‘I don’t want to go there because I want to go to it later.’ ’’ . . . The Rays announced that Jeff Niemann will start the season in the rotation, with Wade Davis moving to the bullpen.

Valentine said first baseman Lars Anderson, who was optioned to Pawtucket along with Jose Iglesias, would see considerable time in the outfield at Triple A. The manager also said Anderson would have stayed with the big league team for any of several other organizations . . . The Sox wore their home whites for the final time until April 13 at Fenway . . . The Sox are off today but have scheduled a pair of minor league games. Clay Buchholz and Andrew Bailey will pitch in a Triple A game, and Aaron Cook and Vicente Padilla will pitch a Double A game against Rays minor leaguers . . . The Sox are 13 for 13 with sellouts at JetBlue. Yesterday’s crowd was 9,685 . . . The Sox presented Fort Myers Children’s Hospital with a $1 million check, and several players participated in a fund-raiser dinner on the JetBlue grounds after the game. John Henry and Tom Werner were at Tuesday’s game, briefly . . . Red Sox pitcher John Lackey issued a statement regarding his use of the term “retarded’’ in a quote that appeared in Monday’s Globe: “I apologize for my thoughtless choice of words that appeared in print earlier today. I meant no harm, and I am sorry to all I offended.’’