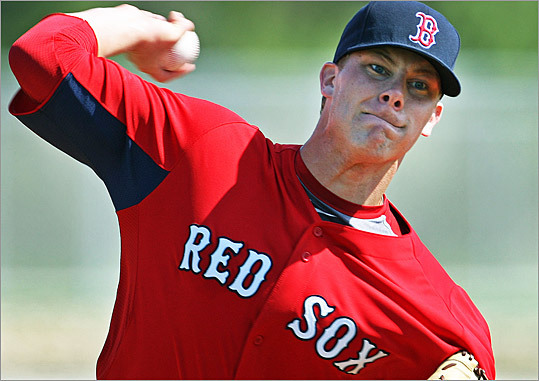 Former A’s closer Andrew Bailey once thought he was headed toWall Street, but that was before he detoured to the All-Star Game and now Boston. (Jim Davis/Globe Staff)
By Peter Abraham Globe Staff / March 11, 2012
Text size – +

FORT MYERS, Fla. - Andrew Bailey had a solid backup plan ready for that inevitable day when his baseball career came to an end. He had earned a degree in finance at Wagner College and would get a job trading securities on Wall Street.

That made sense to him. He would marry Amanda, buy a nice place in the suburbs, and take a train into the city every day. Some of his former teammates at college had gone that route, and they were happy.

By the middle of 2008, in just his second full season of pro ball, Bailey was glad to have that parachute ready. He was 1-8 with a 6.18 ERA for Double A Midland and was wondering how much longer it would be before the Oakland Athletics decided they were finished with a pitcher they had signed to a modest bonus of $135,000.

Keith Lieppman, Oakland’s director of player development, said it was worse than that.

“Catastrophic,’’ he said. “Andrew was struggling, and it just got worse as time went on. He had no confidence and he couldn’t find any success. Nothing was working for him.’’

Bailey didn’t have any regrets. For a player who didn’t have a single scholarship offer coming out of high school in New Jersey, then blew out his elbow in college, advancing as far as Double A was an accomplishment. Had the Athletics sent him home, Bailey would have gone without complaint.

Instead, they sent him to the bullpen, giving Bailey one final shot to stay in uniform. The organization’s pitching coordinator, Gil Patterson, visited Midland and told Bailey not to think of it as a demotion but an opportunity to get to the big leagues within a year.

“I’ll be honest, I thought he was crazy,’’ Bailey said.

Eight months later, Bailey was Oakland’s closer. A few months after that, he was selected to the 2009 All-Star team and found himself shaking hands with President Obama before the game in St. Louis.

Bailey was named 2009 American League Rookie of the Year and followed that up with a second All-Star appearance in 2010. He did marry Amanda and they’re looking for that house in the Connecticut suburbs. But his office will be on Yawkey Way, not Wall Street.

The college game A pitcher who didn’t record a save until he got to the majors is being counted on to replace franchise career saves leader Jonathan Papelbon, the Red Sox having obtained Bailey in trade in December.

“They might not know Andrew too well in Boston, but they’re getting a guy with a lot of character,’’ said Joe Litterio, Bailey’s coach at Wagner. “He’s one of the nicest people you’ll ever meet, a great kid. But something changes when he comes in the game and gets the ball.

“Going to the bullpen was the best thing that ever happened to him.’’

Bailey had a 2.07 ERA in three seasons with Oakland, converting 75 of 87 save chances and striking out 174 in 174 innings. He is one of three pitchers in history to record at least 20 saves in his first three seasons, something not even Papelbon or the great Mariano Rivera can say.

Less than four years removed from wondering whether he would be released, the 27-year-old righthander stands on the rim of another great adventure.

“All you need is one small opportunity and things open up,’’ Bailey said. “That happens in baseball sometimes.’’

Those opportunities can be created sometimes. Bailey was an above-average pitcher at Paul VI High School in Haddonfield, N.J. But Monmouth and Rutgers, two colleges he liked, offered him only the chance to walk on. A Division 3 school, Rutgers-Camden, showed the most interest.

Lori Bailey suggested her son check out Wagner, a small school of 2,000 students on Staten Island, only 30 minutes from their home. Uninvited, Bailey showed up on campus and found Litterio raking the baseball field.

“I told him I wanted to play Division 1 baseball,’’ Bailey said. “I had walked around and fallen in love with the campus.’’

Litterio, who is now an assistant coach at Rutgers, laughed at the memory.

“I think Andrew recruited us more than we did him,’’ he said. “He liked the school and he wanted to come. I didn’t think he would become a prospect. I really didn’t know too much about him.’’

Reliever’s mentality After sending an assistant coach to watch Bailey pitch and checking with some scouts, Litterio was sold on the burly kid from New Jersey. Bailey started seven games as a freshman and was all-league as a sophomore.

A torn ligament midway through his junior season required Tommy John surgery. The Milwaukee Brewers were impressed enough to take Bailey in the 16th round of the draft, but he turned down their offer, preferring to stay in school.

That decision paid off in several ways. Bailey had his best season as a senior and met his future wife, a Wagner lacrosse player, that fall. When the Athletics drafted him in the sixth round in 2006, Bailey already had his degree.

Once Oakland put him in the bullpen, Bailey had a 0.97 ERA the rest of the season in 2008. That led to his playing in the challenging Arizona Fall League, pitching well there, and getting invited to spring training with the major league team.

“I changed my mentality once they switched me,’’ Bailey said. “I focused on being aggressive and getting ahead. I basically said, ‘Screw this,’ and just threw it as hard as I could.’’

Patterson also taught Bailey a cutter, taking advantage of the natural movement of his fastball. The strikeouts started to pile up as Bailey worked the ball to both sides of the plate, something that eluded him as a starter.

“The cutter helped him a lot,’’ said Lieppman. “But his personality was different, too. It was like he was tied down as a starter. He started pumping his fist and showing some enthusiasm. He was extroverted, and we never saw that when he was a starter.’’

‘I’m glad it was Boston’ In February of 2009, Bailey drove across the country to Arizona for spring training with his father. As they passed St. Louis, Bill Bailey said they would be back that summer when Andrew made the All-Star team.

“Typical father-son banter,’’ Bailey said. “I told him to shut up. I was just nervous about going to camp. I was hoping to go to Triple A.’’

But Bailey continued to dice up hitters coming out of the bullpen, and when A’s closer Joey Devine hurt his elbow, he was suddenly the closer. Bailey became the second major leaguer ever from Wagner.

“I don’t think any of us knew who he was,’’ said outfielder Ryan Sweeney, who was included in the trade to the Red Sox. “Oakland always had a lot of young pitchers. But Andrew wasn’t somebody who had a lot of attention on him.’’

When Bailey made the All-Star team, he made sure his father did indeed make that trip back to St. Louis. He also invited Litterio, and before the game, he called Patterson, Lieppman, and the other coaches and executives involved in his development to thank them.

“Let me tell you, that doesn’t happen too often,’’ said Lieppman, who has been with Oakland for 40 years. “It was an amazing thing. Most guys get to the big leagues and they forget who you are. But he was very thankful. Andrew is a class guy.’’

Injuries cut into the two seasons that followed, but the Red Sox are confident that Bailey is healthy.

“I can’t thank Oakland enough for what they did for me,’’ said Bailey. “But if I had to get traded, I’m glad it was Boston. It’s a great spot for me. I’m close to my family and friends and I’ll get a chance to pitch for a team that can go the World Series. I can’t wait.’’

Many of Bailey’s friends are Yankees fans who adopted the Athletics for a few years. Now, grudgingly perhaps, they’ll root for the Sox.

“To be able to see him in those Red Sox-Yankees games will be something,’’ Litterio said. “Andrew deserves it. He understands where he came from and he knows he’s a carrying a dream a lot of his friends had. He made it happen.’’