A change, it seems, amid fastballs 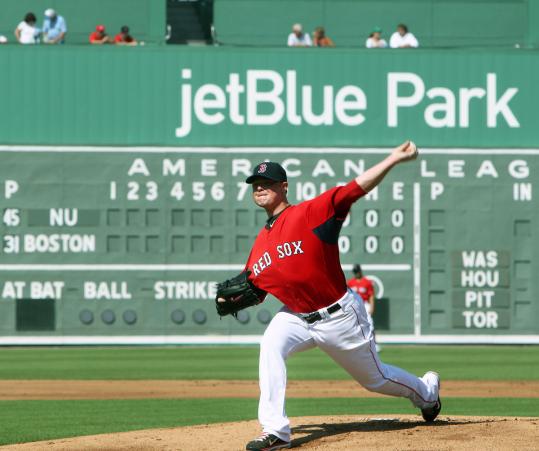 This was Jon Lester’s stat line against the Northeastern Huskies yesterday.

When it was over, Lester was not afraid to acknowledge the obvious: This year is a little different. He is not just another established starting pitcher down here with the Red Sox getting his work in. He is a man on a mission to make amends.

“Like Josh [Beckett] said, we’ve got to earn the trust back from the fans and show them that we are here busting our butts every day,’’ Lester said.

Lester was a big part of the trouble last year. He was one of the pitchers who appeared in the “Hell, Yeah, I Like Beer’’ country music video. He admitted to drinking beer in the clubhouse and ordering Popeye’s Chicken during games.

More important than that, he underperformed when the Sox needed him most. He failed to win his final four starts during the epic 7-20 September collapse.

The surging Rays beat him twice in September. Then he was routed, surrendering a season-high eight runs in 2 2/3 innings in New York on the final weekend of the season. Starting on three days’ rest, he picked up a no-decision on the final night of the season.

Lester has been the most contrite of the beer-and-chicken brigade. Last October, he told the Globe’s Peter Abraham, “Was it a bad habit? Yes. I should have been on the bench more than I was . . . It was the wrong thing to do. I know how it looks to people and it probably looks bad . . . People knew how Tito [Terry Francona] was, and we pushed the envelope with it. This particular team probably needed structure . . . That’s our fault. That’s my fault.’’

Yesterday, we finally got to see him pitch.

The first batter in the history of JetBlue Park was Northeastern right fielder Aaron Barbosa, the pride of Dracut High School. It’s a good day anytime you have a Merrimack Valley Leaguer christening a ballpark.

Barbosa took ball one, then hit a comebacker to the mound that Lester speared nicely. It was the first demonstration that the Sox are benefiting from Bobby Valentine’s subliminal messages. Videos of pitchers making routine plays have been looping in the Sox clubhouse for a couple of weeks.

“It was just kind of a reaction,’’ said Lester. “I didn’t even know I had the ball. I think Iggy [rookie shortstop Jose Iglesias] was mad at me because he was ready to make that play behind me.’’

After fielding the grounder, Lester struck out catcher Tucker Roeder, then got left fielder Matt Miller to fly to center for a rocking-chair first inning.

He retired Jon Leroux on a fly to left to open the second, then surrendered a ground-ball single up the middle to Pete Castoldi of Marblehead and St. John’s Prep. The inning ended on a strike-’em-out, throw-’em-out with Jason Roth at the plate and Jarrod Saltalamacchia making a perfect throw to second.

During Lester’s two-inning stint, not a single comment about chicken and beer was heard from the happy inaugural crowd (8,124). It is, however, awkward to hear vendors yelling, “Beer, here!’’ when one of the 2011 Delta House boys is on the mound.

“It’s good to get the first one out of the way,’’ Lester said. “I felt good. Obviously, I feel strong. I think I’m at a little better point than I was last year, going into the first game. I was pleased with it. Just trying to go out and execute pitches and get that first one under your belt.’’

“I like to see the pitchers get their legs underneath them,’’ said Sox manager Bobby Valentine. “They need to get out there and get the newness out of it. They need to get in and get out of the game.’’

“I was just trying to throw strikes, throw the ball downhill, not overthrow,’’ said Lester. “All in all, I felt pretty good with where I was at.

“If you make your starts and get to 200 innings, with this offense we’ve got, you’re going to win more than you lose.’’

The comparisons with the previous administration will not go away.

“It’s a little more high-paced,’’ said Lester. “There’s a little more intensity in our drills than in years past. I don’t think that’s to say a bad thing about years past spring trainings. It’s just the way our two managers have different personalities.

“Bobby’s more high-paced, running from field to field, and Tito’s more laid-back. I think there’s a time and place for both, but I think it’s been good. I think we’ve got a lot done in two weeks and I think guys are ready to get this thing going and start playing more games.’’

Yesterday was the public’s first look at Fenway South. Fans are going to love this place. Wait until you see the man with the ladder coming out of the left field wall to update the front-loading scoreboard after every run, hit, or error. Lester said it was “eerie’’ warming up in the right field bullpen, which is a perfect replica of the bullpen at Fenway.

Valentine was asked if there was anything special for those playing in the first Fenway South game.

“When they’re old and visiting Florida, they’ll all come back and say, ‘I played in the first game at the new Fort Myers park.’ This is a memory.’’

A good memory for Jon Lester. Good memories for everyone who participated in the Sox’ day-night doubleheader with Northeastern and Boston College.

Today it will be Josh Beckett taking the mound against the Minnesota Twins as the Redemption Tour continues.