This ban on alcohol is a lot to drink in 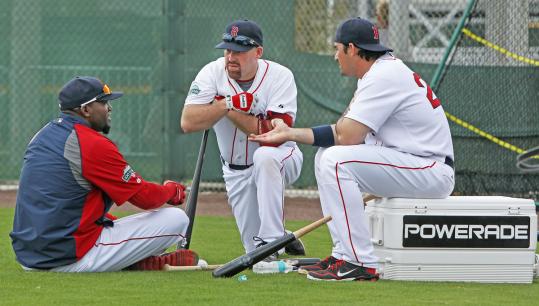 FORT MYERS, Fla. - No beer in the Red Sox clubhouse.

What’s next? No Swan Boats in the Public Garden? No Pops on the Esplanade on the Fourth of July? No L Street Brownies swimming in the ocean on New Year’s Day?

Manager Bobby Valentine made Hub hardball history Saturday morning when he told the 2012 Red Sox that he was putting a lid on the clubhouse keg.

There’s some irony in the Fenway beer ban coming from a new Red Sox manager. We won’t mention any names (OK, we’ll mention thirsty Pinky Higgins, who once pushed Bud Collins’s face into a plate of beef stroganoff), but over the last century the Sox have been managed by a veritable conga line of drunks. Dig into some of the curious decisions coming out of the corner office through the years and you’ll find a trail of lager stains. The nectar of the gods made them do it.

Some would argue that brewskis have been a friend to Boston baseball through the decades. Is it any coincidence that the worst era in Red Sox history came during Prohibition? Check it out. The Volstead Act was not good for the Red Sox. The Sox finished under .500 during every year of Prohibition, losing 100 games five times, and finishing in last place nine times.

Without beer we’d certainly have a lot less Sox folklore. Any guess what was behind hurler Gene Conley’s aborted attempt to visit Israel in 1962? Conley will be the first to tell you that he had a million beers in the clubhouse after getting rocked by the Yankees in a 13-3 loss, then bolted the team bus, bought a ticket to Tel Aviv, and went AWOL for three days. (He was stopped from boarding the plane because he had no passport.) When Conley finally returned to Fenway and was called on the carpet to apologize to the owner, Tom Yawkey pulled a bottle from his desk and offered the tall righty a drink.

Do we need to mention a young southpaw from Baltimore named George Herman Ruth? The Babe grew up in a bar and roamed the Back Bay, swilling beer in his Boston years. The Sox won three World Series with the Babe burping between innings.

Baseball and beer are joined at the hip flexor. The Cardinals and Anheuser-Busch. The Blue Jays and Labatt. The Orioles were owned by Baltimore brewmaster Jerold Hoffberger.

This is a sport with a team nicknamed “The Milwaukee Brewers,’’ a team owned for decades by the man who has become baseball’s commissioner for life.

Red Sox history was awash in beer long before Messrs. Beckett, Lackey, and Lester came along.

Without beer in the clubhouse we might never have seen Al Nipper and Roger Clemens butting heads on Channel 4’s “Sports Final’’ the night the Red Sox clinched the American League East in 1986. It’s doubtful Carl Yastrzemski would have made it through 23 seasons, and I can’t even begin to think of all the Wade Boggs fun we would have missed. Boggs and lefty Tim Lollar had their names engraved on barstools of a Winter Haven saloon during the spring of 1986.

Valentine broke into a baseball world in which beer was king. And ubiquitous.

“It’s not as if it’s been the same philosophy for a million years,’’ he reasoned before announcing his decision. “If people don’t understand that it’s 2012 and not 1912, then they’re fooling themselves.’’

The man is right. Enough is enough. Some things are not OK, just because it’s always been done the same way.

Citing his rules for the players, Valentine said the goal was for them “not to embarrass themselves or the team, the community, their teammates. I don’t think that’s a new rule. That’s a longstanding rule of life.’’

When he was asked how this news was received, he said, “You mean like standing ovation or booing? I didn’t get either of those. It was probably somewhere in between a standing ‘O’ and standing boos.’’

Sox players have been saying all the right things. David Ortiz reminded us that the clubhouse “ain’t no bar.’’

I caught up with Josh Beckett as he was leaving the park yesterday.

“Josh, any thoughts on Bobby Valentine’s decision to take beer out of the clubhouse?’’

“That’s his decision,’’ said the righty.

“Do you care that there won’t be beer in the clubhouse this year?’’

This is where the wise guy in me wants to wrap up with something catchy like, “Stay thirsty, my friends.’’

I will resist that urge.