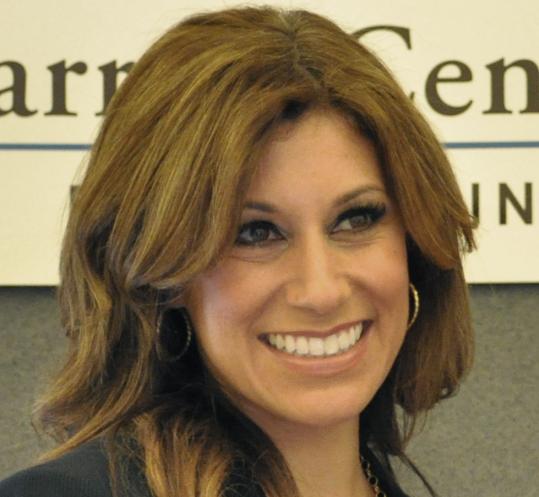 Yours truly wasn’t among the local and national media members solicited via e-mail recently by Russ Kenn, the coordinating producer of NESN’s Red Sox telecasts, in search of advice for recently hired in-game reporter Jenny Dell to, as he wrote, “put her in a position to succeed.’’

But being the helpful sort and all, here’s a recommendation for Kenn’s consideration:

No more silly concession-stand expeditions during the game. The fried chicken-and-waffles dish in Cleveland nearly led to an on-camera disaster with Heidi Watney last April. It’s a mindless, obtrusive feature, and no one wants to be going through this search again in May should Dell encounter a bad crab cake in Baltimore and have to go on the disabled list.

All right, maybe that’s not exactly what Kenn is looking for. But it did dawn on me that there is one person perhaps above everyone else Kenn queried who is qualified to provide Dell with wisdom on how to approach this particular high-profile gig.

Tina Cervasio held the same job herself for two years (2006-07), and four years after she left, she is remembered fondly by her peers for the sunny disposition and professionalism with which she conducted herself.

Now the sideline reporter for Knicks telecasts on the Madison Square Garden network, Cervasio slipped away from the Jeremy Lin whirlwind for a few moments yesterday to pass along advice - advice she actually did offer, since she was among those who responded to Kenn’s query.

“One thing you have to remember, whether you’re in Boston or New York, is that the job puts you in the spotlight,’’ Cervasio said. “Whether you’re at the ballpark, out to dinner, riding the T, people are going to be watching you because the Red Sox are so popular and it’s become a high-profile job.

“They feel like they know you. You have to have that awareness that it’s a 24/7 thing, and you have to conduct yourself accordingly even when you’re not on the air or at the ballpark.’’

In a sense, Cervasio is paying it forward. She received what she says was comforting encouragement from one of her NESN colleagues when she arrived in March 2006.

“Jerry Remy was the first person who told me, ‘You have to be yourself,’ ’’ Cervasio said. “And that makes all the difference. You’ll have to deal with consultants, you’ll have to deal with people critiquing you, and sometimes people, myself included, will start acting the way they think viewers want you to be.

“That’s the worst thing you can do, because similar to athletes, you’re thinking about doing the job rather than just doing it.

“Be yourself, carry yourself as a professional, and you’ll find that you’ll get comfortable pretty fast.’’

Glad to see Ron Jaworski received a five-year contract extension with ESPN, where the good-natured NFL analyst and connoisseur of film study has worked since 1990. But with the new deal and an increased presence on various studio programs comes a catch that ESPN ham-handedly underplayed in making the announcement Wednesday:

He’ll no longer be part of the “Monday Night Football’’ team, with holdovers Mike Tirico and Jon Gruden forming a two-man booth in the fall.

The change was not Jaworski’s choice - he told Sports Illustrated he was informed of the decision Monday - and those of us who thought “Monday Night Football’’ finally got it right have to wonder what ESPN is thinking, though it must have assurances that Gruden won’t return to coaching soon.

It is true that Jaworski and Gruden sound a lot alike. When Jaworski casually dropped a four-letter word during a telecast last year, there was initial confusion over which analyst said it. But when it came to insightful analysis, you always knew it was Jaworski doing the talking.

Gruden is entertaining, but he tilted toward caricature at times last season, and Jaworski’s nuts-and-bolts analysis proved a pleasant balance.

Removing Jaworski from the telecast is not a good thing. And as charismatic as Gruden can be, the suspicion here is that giving him more room to verbally wander may not be, either.

Fox moved its traditional Saturday baseball schedule into prime time three times last season, and the results were satisfying enough - Nielsen ratings were 50 percent higher in the evening - that the network will carry several more games under the lights this season. Fox will air its Saturday broadcasts at 7 p.m. for eight consecutive weeks beginning with a five-game regional package highlighted by a Red Sox-Phillies matchup May 19. The Red Sox could appear on Fox the maximum of nine times . . . Belated kudos to Sean Grande and Cedric Maxwell, whose recent milestone 1,000th Celtics broadcast together was overlooked around here amid Super Bowl week. The two, who have been calling Celtics games on the radio since 2001, are pleasant company with their easy, quirky chemistry, enhanced by Grande’s detailed preparation and Maxwell’s candor . . . Cervasio has a firsthand perspective of the Jeremy Lin phenomenon. While it has become common to hear reporters say they’ve never seen anything like the hubbub surrounding the former Harvard standout. Cervasio said the media crush actually reminds her of something she has covered in her career. “I’m kind of used to something like this because of when Daisuke Matsuzaka came to the Red Sox,’’ she said. “It’s a similar combination of the national media and local media, and then there’s the factor of the international media because of so many stations in Asian markets covering this. Jeremy is such a humble kid, and I love it when a story becomes international. I hope this train keeps rolling, because it’s so fun to be around.’’