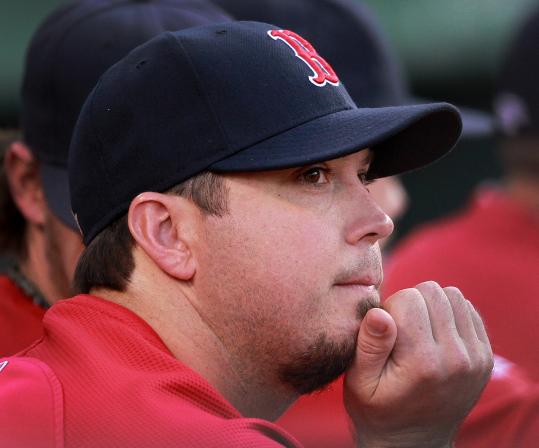 Despite a rough September, Josh Beckett had a fine 2011; his 2.89 earned run average was fifth in the American League. (File/Barry Chin/Globe Staff)
By Peter Abraham Globe Staff / February 15, 2012
Text size – +

FORT MYERS, Fla. - Josh Beckett hasn’t been getting much sleep lately thanks to his four-month-old daughter.

Being up early does have its advantages. Beckett was one of the first players to arrive at the Red Sox player development complex at JetBlue Park yesterday. By 11 a.m., he had thrown a 50-pitch bullpen session.

Beckett had one of the best seasons of his career in 2011. His 2.89 earned run average was fifth in the American League, and only Justin Verlander allowed fewer hits per nine innings. Beckett also went at least six innings in 25 of his 30 starts and held opponents to a .608 OPS.

But that was marred by a September in which the righthander went 1-2 with a 5.48 ERA in four starts as the Red Sox collapsed and finished in third place.

Beckett then was identified as one of the pitchers who drank beer and ate fast-food chicken in the clubhouse during some games he didn’t start.

McClure said he had “quite a few’’ conversations with Beckett over the winter. He was impressed to see his ace show up five days ahead of the official report date for pitchers and catchers.

“That’s a great sign,’’ McClure said. “He wants to win, that’s the bottom line. The stuff that happened last year, it happened. It’s unfortunate but it happened.

“He’s coming in here with something he wants to do and that’s win the division.’’

Beckett said his early arrival had no meaning beyond his wanting to get started.

But McClure appreciated it all the same.

“I think it shows the rest of the guys how serious they are about wanting to get this thing going,’’ he said.

The idea that Beckett somehow needs to rebound from last season isn’t rooted in reality, according to McClure.

“Josh had a pretty good year last year when you look at his stats,’’ he said. “He just needs to go out and do the same thing he’s always done.’’

Junichi Tazawa also reported to camp yesterday. The righthander from Japan is now fully recovered from the elbow surgery that caused him to miss the entire 2010 season and limited him to 59 2/3 innings last year.

Tazawa was developed as a starter after being signed for $3.3 million out of a Japanese industrial league in 2008. But now he will be tried in the bullpen.

Tazawa, 25, has a 7.31 ERA in nine major league appearances since joining the Red Sox.

Manager Bobby Valentine arrived at the complex on his bicycle and left in a car, heading to speak at a local Rotary Club meeting . . . Along with Beckett, Felix Doubront and Alex Wilson were among those who threw in the bullpen . . . McClure on Daisuke Matsuzaka, who is recovering from Tommy John surgery: “Everything looks good. It looks like he’s throwing naturally. It doesn’t look like there’s any hindrance to his delivery.’’ Matsuzaka, who had surgery in June, could return after the All-Star break.