New medical plan is in place 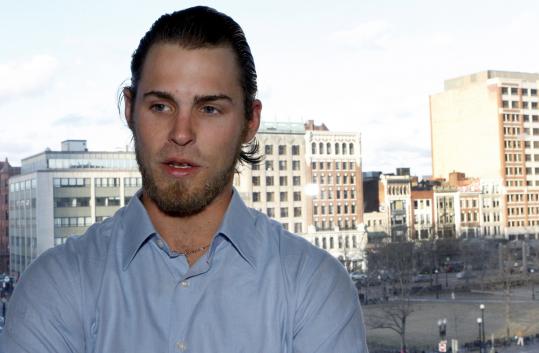 Former Sox outfielder Josh Reddick (above) was on hand for the Baseball Writers Dinner last night and weighed in on Carl Crawford’s recent wrist surgery - a subject he is well-versed in. (Bizuayehu Tesfaye/Associated Press)
By Peter Abraham Globe Staff / January 20, 2012
Text size – +

Red Sox owner John Henry promised a full review of the team’s medical staff following the historic collapse in September and subsequent revelations that some players were indifferent toward conditioning.

Consecutive third-place finishes were not a product of just poor play on the field; the Red Sox also struggled with keeping their players healthy. What were initially reported as minor injuries often resulted in long stays on the disabled list. Some players also gained weight during the season.

“There were areas of our players’ physical maintenance and care that we thought could improve from 2011,’’ general manager Ben Cherington said yesterday.

Some of the changes were made quickly, including the removal of Dr. Thomas Gill as medical director. Cherington also looked deeper in an effort to create what he termed “the best possible environment’’ for players.

The Red Sox created two new positions, hiring Mike Boyle as their strength and conditioning consultant and Dan Dyrek as a clinical consultant.

Boyle is a local legend in the strength and conditioning community, having spent 25 years with Boston University while also working with athletes from the NFL, NFL, NBA, and baseball.

Cherington described Boyle as having a dual role.

He will be with the team at spring training and at home games while providing “mentorship’’ to new strength coach Pat Sandora and members of the minor league conditioning staff.

Rick Jameyson, who was with the Indians for 20 seasons, was hired as the head athletic trainer. Brad Pearson was promoted from the minor league staff to be his assistant.

The Sox retained their other assistant trainer, Masai Takahashi.

“We felt like we needed to make some changes to bring it to the next level,’’ Cherington said. “There were two primary objectives - that’s to increase the level of clinical care in the clubhouse and at the same time, while we’re doing that, provide the players with the traditional day-to-day needs that they have to go out on the field and play.

“So we think this staff combined the best of the traditional baseball world and the next generation of methodology and clinical care.’’

Cherington and his staff studied other sports and felt the Sox needed a better ratio of staff members to players.

Josh Reddick, who was traded to the A’s in the Andrew Bailey deal, said he had the same surgery on his wrist that Carl Crawford recently had. “It’s not that tough of a rehab process as long as you’re there working out - and we know Carl always works out,’’ said Reddick. “He’ll be just fine.’’ Reddick said the pain was rough unless he got shot up with pain killers, so he felt the surgery would relieve it. He had his procedure about eight weeks ago.

Streak on the line

The Red Sox have not gone to a salary arbitration hearing since 2002. But with Bailey, Alfredo Aceves, Daniel Bard, and David Ortiz still unsigned, that streak could be snapped. “We wouldn’t rule out a hearing,’’ Cherington said. The first hearings are not until February, giving the sides time to negotiate. Ortiz could be the streak breaker. He is seeking $16.5 million with the Sox offering $12.65 million. “That’s part of the game,’’ Ortiz said. “This is the first time I’m kind of paying attention to it. It may be a big deal but it doesn’t seem like it to me.’’ . . . Cherington said his hope was that the lingering Theo Epstein compensation issue will be settled before spring training. The matter is now being mediated by commissioner Bud Selig . . . Ryan Lavarnway said a severe stomach virus forced him to leave winter ball in Venezuela after only a few weeks. He lost 18 pounds before returning home. Lavarnway will report to Fort Myers Feb. 1 to work with catching instructor Gary Tuck.

Nick Cafardo and Michael Vega of the Globe staff contributed to this report.