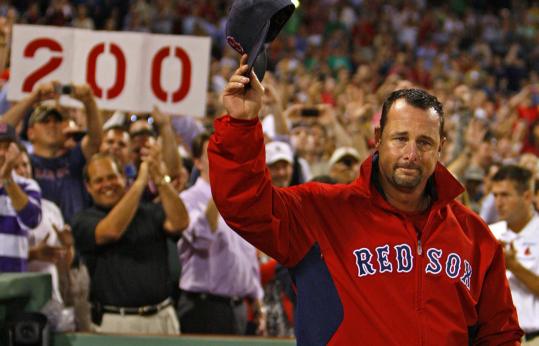 He didn’t have much to say beyond one clear and concise sentence.

“I have a strong desire to pitch one more year for the Red Sox,’’ Wakefield said.

At 45, Wakefield was the oldest player in baseball last season and was erratic, going 7-8 with a 5.12 ERA. Now a free agent, his hope is to return for an 18th season in Boston and help return the team to the postseason.

General manager Ben Cherington has been cautious in discussing Wakefield, saying only that the team owed it to him to explain exactly what role he could fill next season - if indeed any.

Could Wakefield play for another team?

“I haven’t weighed all my options yet,’’ he said. But he nodded when asked if playing in the National League holds any appeal.

Meister also said Wakefield would benefit from a switch to the NL, where the hitters aren’t as accustomed to his knuckleball.

Regardless of where it might be, Wakefield is preparing to play, having launched into a conditioning program almost immediately after the season.

Based on how he looked on the driving range at the David Ortiz Celebrity Golf Classic, Wakefield’s work is paying off. He has lost some weight, and spring training is still months away.

Wakefield spoke briefly with new Sox manager Bobby Valentine Friday night and again yesterday. He declined to say how much contact he has had with the Sox otherwise.

Wakefield made a modest $2 million last season, so the question is not so much money as it is opportunity. The Sox, who badly lack rotation depth, could be amenable to a one-year deal to have Wakefield available as a long reliever and spot starter.

He started 23 games and threw 154 2/3 innings last season, his most work since 2008. The Sox would probably prefer Wakefield not be used that much.

Another factor is that Wakefield is six victories shy of 192 with the Red Sox, the franchise record shared by Roger Clemens and Cy Young.

“If he’s used in the right way, he can be very effective,’’ said former teammate Johnny Damon. “But when you don’t know what you’re doing - if you’re in the bullpen, if you’re starting - it makes it tough. It would be tough on me if I didn’t know whether I was starting or coming off the bench.

Damon, a close friend, believes Wakefield would be motivated by the opportunity to break the record. But he wonders whether Wakefield will get the chance.

“It means the world to him,’’ said Damon. “But we all know in Boston that guys aren’t going to be there forever. Before their careers are over, it’s not going to be in Boston, unfortunately.

“No one ever leaves Boston happy. But hopefully Tim Wakefield can.’’

It was a year ago, at the same event, that Wakefield said he was planning to retire after one more season.

“I’m not going to come out and say I’m going to retire at the end of the 2011 season,’’ he said last December. “But getting closer to the end, I’d really like to enjoy it more than I did last year.’’

Wakefield had an up-and-down 2011 season. Used sparingly in low-leverage relief situations early on, he was inserted into the rotation in late May to replace the injured John Lackey.

Wakefield had a solid seven weeks, posting a 4.47 ERA as the Sox won seven of the nine games he started. But Wakefield was 2-5 with a 5.55 ERA after the All-Star break. His poor pitching helped feed the team’s September collapse.

Wakefield did not dwell on the end of the season other than to say that it was “very sad’’ to have it end so abruptly on the final day. But the experience did not diminish his desire to return.