Charity can be all-consuming for next Sox pilot 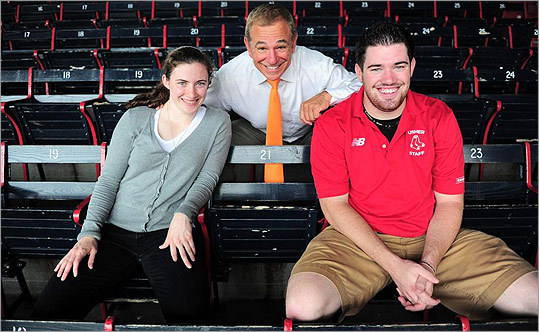 The next Red Sox manager has a social condition: a charitable impulse he sometimes can't control.

After 9/11, Bobby Valentine reached out to Matt and Jamie Conroy, newly fatherless. Valentine, then a stranger, over the years became the primary man in their lives. The bond endures: On the eve of his big interview at Fenway Park, he treated the Conroys, now Bostonians, to dinner.

The night before, Valentine emceed a charity event, helping to raise more than $215,000 to fight childhood cancer.

And no sooner did Valentine, 61, finish his day-long interview with the Sox than he bolted to Japan to help the nation's earthquake victims. Sox executives asked him to return early so they could present him today as the 45th Sox manager.

For all the enemies Valentine has collected in his professional life - two national sports publications have cast him as "the most hated man in baseball" - the Sox have entrusted their underachieving team to a leader who has devoted decades to giving so much to so many that at times he has risked allowing his good works to interfere with his job performance.

It happened in his last turn as a major league manager, with the New York Mets in 2002. Grieving for a friend who died in the terrorist attacks - "He was like a man possessed after that," Mets spokesman Jay Horwitz said - Valentine so immersed himself in helping those shattered by the disaster that his managerial focus blurred as the Mets tumbled into last place in the National League East and became the laughingstocks of baseball.

"He ran himself ragged," Horwitz said. Valentine was fired after the season.

"You could tell he was distracted," said Jim Duquette, the Mets assistant general manager at the time. "It was pretty clear he took his eye off the ball a little bit because of how much he put his heart, soul, and energy into the aftermath of 9/11."

Valentine is a baseball lifer, a former high school and college star who appeared bound for major league success before he mangled his leg trying to make a catch for the Angels in 1973. He persevered as a bench player for six more seasons before he retired in 1979 at 29.

Six years later, the Texas Rangers made him the youngest manager in the majors, launching a 20-year managerial career - eight with the Rangers, seven with the Mets, and five with Japan's Chiba Lotte Marines - in which he rarely reached the postseason. His best finish in the majors was losing to the Yankees in the 2000 World Series; he guided Chiba Lotte to a Nippon Series title in 2005.

Along the way, Valentine established himself as one of baseball's sharpest intellects, most gifted baseball technicians and charismatic leaders, though his provocative temperament colored his legacy.

Much has been made of Valentine's powerful personality, his clashing with owners and general managers, his purported Machiavellian tendencies, his playing mind games with players and sportswriters. Tabloid headlines have described him as toxic and phony. Rivals have called him arrogant and smarmy.

But the beneficiaries of his generosity know Valentine as someone else altogether. Friends described his greatest attribute - and potential weakness - as his inability to reject a request for help or to walk away from a stranger in need.

"He tries to do too much," said Larry Rocca, who covered the '02 Mets as a sports columnist, then served in Chiba Lotte's front office when Valentine managed there. "I say this in a positive way, but he's on the move from the moment he wakes up. He never stops."

To Matt and Jamie Conroy, two children from Brooklyn who lost their father, Kevin, in the attack on the Twin Towers, Valentine was a godsend. Matt, a security system salesman who graduated last year from Northeastern University and has been an usher for several years at Fenway, calls Valentine his guardian. To Jamie, a senior captain and starting point guard for Northeastern's women's basketball team, Valentine is an uncle.

"When you're a 12-year-old kid and your dad gets killed and some pro sports manager steps into your family, you wonder if this is just some kind of publicity stunt," Matt said. "But we've been blown away by everything Bobby has done, and it hasn't changed one bit in the last 10 years. That's just who he is. We couldn't have asked for anything more."

Valentine flew Matt to the 2001 World Series in Arizona. He showed up unexpectedly at Jamie's youth basketball games. He gave a shout-out to Matt on ESPN's "Baseball Tonight" when his Northeastern club team won a national baseball title. He flew Matt and his friends to Japan for at least two weeks every year he managed there, the children living in his apartment. And he continues to speak or text with the Conroys several times a week.

"I can't imagine what our lives would be like without him," Jamie said. "Everything he has done for us over the last 10 years has really been remarkable."

Valentine began his charity work as the student council president of Rippowam High School in Stamford, Conn. He has described learning about giving from his father, Joseph, a carpenter, and his mother, Grace, a Catholic churchgoer who reminded him of the responsibilities that come with being an elite student-athlete; he turned down an academic scholarship to Yale and a football scholarship to succeed O.J. Simpson at the University of Southern California before the Dodgers selected him fifth overall in the 1968 draft.

In Texas, Valentine is remembered for helping to raise hundreds of thousands of dollars for a youth scholarship fund. He also provided free meals at his restaurant for children in the Big Brothers/Big Sisters program.

In Japan, he is remembered for small acts of kindness - he donated a tree to the community for each team victory - as well as his efforts for victims of the earthquake.

New Yorkers will never forget Valentine's response to 9/11, his serving around the clock as de facto commander of a emergency staging area at Shea Stadium, his frequent, unpublicized visits to the disaster site, his comforting the crew of a Queens firehouse that lost 19 members in the rescue effort, his quietly reaching out to countless grieving children.

"It was impossible to go to sleep," he recently told USA Today. "How many funerals can you go to? How many times can you hold a hand and look into empty eyes that show you nothing but a broken heart?"

The mayor gave Valentine a key to New York City. Major League Baseball gave him its Branch Rickey Award for community service. He has been honored by hundreds of charitable organizations, and his good works are the stuff of legend in Stamford.

"I don't take days off," Valentine once said. "I just want to help."

He arrives in Boston with the potential to revitalize a torpid team on the field and add a powerful dimension to the Red Sox Foundation's charitable initiatives. His challenge off the field, friends said, will be resisting doing so much good that it hurts.