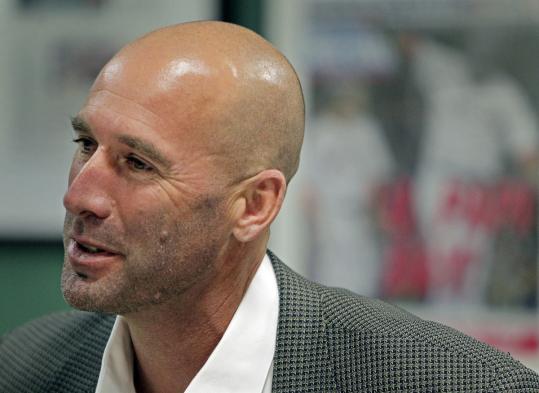 Dale Sveum seems to be in good position regarding the Red Sox managing job - but the Cubs are interested in him, too. (Jim Davis/Globe Staff)
By Peter Abraham Globe Staff / November 17, 2011

MILWAUKEE - The Red Sox are prepared to open up their search for a new manager as the candidate they once seemed to favor, Dale Sveum, neared an agreement with Theo Epstein and the Chicago Cubs.

General manager Ben Cherington agreed that was a possibility, but said that one of the current candidates could get the job of replacing Terry Francona.

Their respective teams have extended their permission to the Red Sox to continue the interview process.

Cherington claimed the Sox are not dissatisfied with the candidates they have, but his expectation was they would add to their list.

“We feel like there are some unique circumstances here. This is not just any manager’s job. We do feel like we’re ready to win,’’ Cherington said. “There are challenges related to what happened last year and just generally in the Boston market.

“I’ve been very happy with our candidates and our next manager could very well come from those candidates. But we’re not ruling out adding to that field. We’ve learned a lot asking each other questions. What is it we really need right now? Through that process, all of us have asked what our current needs are . . . We don’t want to limit ourselves.’’

Red Sox owners John Henry and Tom Werner, who met with Sveum yesterday, appear to want a candidate with more major league managerial experience. Outside of Lamont, the team has not interviewed a candidate who has been anything more than an interim manager.

Cherington said it was too late in the process to hire a manager away from another team, and none were under consideration.

Finding worthwhile candidates with experience could be difficult. There are former managers available such as Don Wakamatsu, Jim Riggleman or Trey Hillman. Another possibility would be ESPN analyst Bobby Valentine.

Hall of Famer Ryne Sandberg, who has minor league managerial experience, is another possibility.

The Red Sox initially hoped to hire a new manager before Thanksgiving.

“We’re bumping up against that,’’ said Cherington, who leaves today for the Dominican Republic to meet with team officials there and to scout several free agent Cuban players.

In 2003, the Red Sox did not hire Francona until the first week of December. Presumably, the Red Sox would want a manager in place before the start of the winter meetings Dec. 5.

Sveum appeared to be the leading candidate yesterday afternoon when he met with Cherington, Henry, Lucchino, and Werner for lunch and a second interview.

Their meeting at Ward’s House of Prime in downtown Milwaukee lasted approximately 2 hours and 30 minutes.

“We had a nice lunch,’’ Werner said upon returning to Major League Baseball’s owners meetings at the Pfister Hotel. “That’s all I really have to say.’’

Sveum had met with the Cubs on Tuesday night. For him, Chicago may be a better fit. By the end of the night, multiple reports had him nearing an agreement to manage the Cubs.

One of Sveum’s strengths is as an instructor, a quality that could prove valuable as Epstein rebuilds the Cubs. The Cubs also conduct spring training in Arizona, where Sveum resides in the offseason. He also is more familiar with the National League Central given his six seasons with the Brewers.

Lovullo could emerge from the pack now that Sveum appears headed for Chicago. Lovullo, 46, has nine years of experience managing in the minors but only one year on a major league coaching staff. He worked for the Red Sox as the manager of Triple A Pawtucket in 2010.