Cherington up, digging in 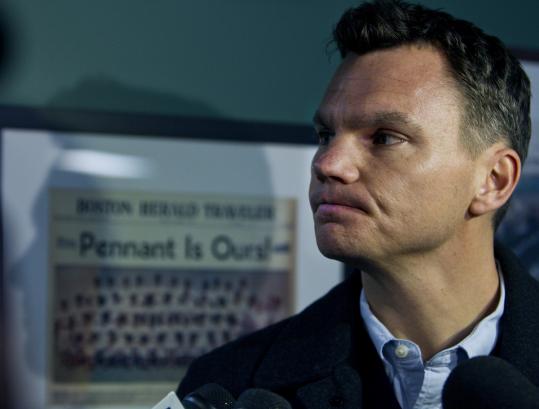 MILWAUKEE - For years Ben Cherington was one of the “other’’ guys in the room, the one who was buried in a laptop or looking through charts when you walked into Theo Epstein’s daily press briefing. He’d neatly pack up his belongings and move to a less conspicuous place behind the curtain, so to speak.

It happens to so many general managers who were once assistants or farm directors or scouting directors. One day, it becomes their show. As baseball’s GM meetings begin this week, the Red Sox’ Cherington will be a main player.

Cherington will be one of the new guys in the room along with Baltimore’s Dan Duquette (a fellow Amherst grad who hired Cherington with the Red Sox in 1999) and Jerry DiPoto, the new GM of the Angels and a former Red Sox scout. Veteran Terry Ryan returns as the Twins GM. Jed Hoyer switches from the Padres to the Cubs, and Josh Byrnes, formerly the GM in Arizona, heads to San Diego.

“From what I’ve seen of Ben, he’s very smart and very thorough and he’ll do a fabulous job,’’ said Yankees GM Brain Cashman. “He’s been in the Red Sox organization and understands how it operates and was part of how it operates. The transition should be smooth and all of us will have to be on our toes.’’

Most important of all, Cherington, who has inherited a team that has a lot of work to do to repair the ill will of last season, will see those with whom he’ll engage in trade talks in a new light.

We all await his first managerial hire, his first free agent signing, his first trade, his first tough decision. We await his game plan for turning Carl Crawford into a productive player again and how he introduces young players such Ryan Lavarnway, Ryan Kalish, and Jose Iglesias to the major leagues.

We await how he will go about straightening out the mess in the clubhouse. We await the rules, and the consequences if those rules are not obeyed. We await Cherington’s input in managerial decisions. Will he take a Billy Beane approach of hands-on all the time or will he allow his manager to run the team as he sees fit?

We already have seen the first major defection - Jonathan Papelbon - a huge loss.

Cherington, who has come off as very together and smooth, probably has some order to the issues he would like to attack, and there are plenty.

He commented this week that this is a team on which repairs need to be made under the hood more than shopping for new parts. But he will both buy the groceries and be the mechanic.

He’ll have to deal with the following:

1. Papelbon/David Ortiz - Cherington never made an offer to Papelbon and he’s now the closer in Philadelphia. Cherington indicated in his initial talks with Papelbon’s agents, the Levinson Brothers, he never was willing to go to the place - four years, $50 million with an option for a fifth year - that the Phillies were willing to go. Now Cherington must replace Papelbon. He either will hand the job to Daniel Bard or sign a replacement. Heath Bell, Joe Nathan, Jonathan Broxton, Brad Lidge, and Frankie Rodriguez are notable free agent closers.

In the case of Ortiz, Cherington has held talks with the DH, but he is waiting for a market to develop. Is there a first base market? If the market is small for Ortiz then why commit to the 36-year-old for more than one season? The Yankees already indicated they have no interest in signing him. The Blue Jays have some interest, but they are also committed to Edwin Encarnacion. The Orioles could be an interesting candidate. Would a National League team take a shot that Ortiz could play first base regularly?

2. The manager - We must admit, we’re not wowed by the managerial search. It seems to focus on inexperienced, controllable “prospects’’ rather than proven commodities. This doesn’t seem like a logical approach given what happened last season. Cherington and his team seem deathly afraid of naming a strong manager such as Bobby Valentine. It remains to be seen if Cherington will find the next great manager or someone he may have to fire soon into his tenure.

3. Trades - Cherington would love to make a couple of strategic ones to solve needs in right field, the rotation, and the bullpen. Would he have enough to nab Gio Gonzalez or Trevor Cahill from Oakland or Anibal Sanchez from the Marlins? Would he consider dealing an established player such as Kevin Youkilis for a starting pitcher? Would John Danks, Gavin Floyd, or Jair Jurrjens be players Cherington would give up key prospects for?

4. Free agents - Is 34-year-old Carlos Beltran, a player the Sox coveted last offseason and made inquiries for at the trading deadline, coming into play as a candidate in right field? Michael Cuddyer seems to fit in right and he also can play third base. But he’ll be 33 March 27. And then there are the pitchers. What would it get to bring Mark Buehrle to Boston? Would the Sox engage in negotiations with CJ Wilson? Or will the Cherington opt for Yu Darvish, the Japanese/Iranian superstar? Could Cherington swing a deal with Epstein for Matt Garza? Would Epstein rubber-stamp his signing of Crawford and bring the left fielder to Chicago?

5. Jason Varitek/Tim Wakefield - Will Cherington make the tough decisions on these two fixtures? Interestingly, the Sox probably could use Wakefield again given John Lackey and Daisuke Matsuzaka are both recovering from Tommy John surgery. Varitek still can be a good backup catcher, but Cherington must decide if Lavarnway is ready for a major league role.

While Cherington tackles these issues, and while GMs wheel and deal, the meetings seem to be the official beginning to the hot stove season, though it’s rare anything of substance occurs at these get-togethers.

From here, Cherington will move to where the real action is - the winter meetings in Dallas starting Dec. 4.

“Everyone already knows Ben,’’ said former Twins GM Bill Smith. “He’s not going to have a big transition. And he seems to have some things he needs to resolve. When I took the job we had lost Torii Hunter and we were about to deal Johan Santana. It seems Ben is entering that type of situation where his first season won’t necessarily be his easiest one.

“When you first realize that you’re the guy in charge, it can be a little daunting, which is why you need strong people around you that help you make the final decision. I had that and I’m sure Ben has it, too.’’