Mackanin makes his case to Sox 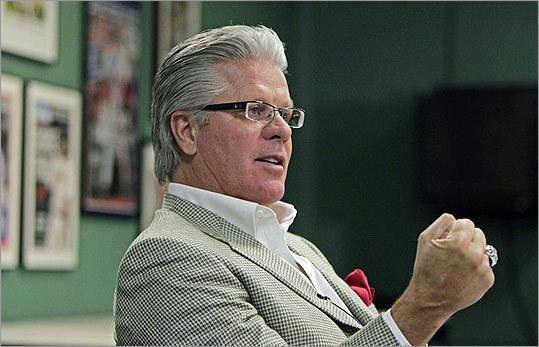 As the Red Sox search for a manager, they almost certainly will not interview a candidate with more experience than Pete Mackanin, who was at Fenway Park yesterday to meet with team officials.

Mackanin, a youthful-looking 60, has managed more than 2,000 games in the minor leagues and during winter league stints in Australia, the Dominican Republic, Puerto Rico, and Venezuela.

But Mackanin, the bench coach in Philadelphia the last three years, has yet to get a major league team of his own despite that impressive résumé. He said his wife, Nancy, dwells on the reasons why that is more than he does.

“Of course I’ve wondered,’’ Mackanin said. “I don’t know. Whatever happens, happens. I’m good with it. I’m happy to have an opportunity just to have somebody listen to me.’’

The Sox gave Mackanin plenty to talk about. He arrived at 9 a.m. and was in meetings for nearly nine hours with general manager Ben Cherington and his staff before being ushered up to the press box to meet with reporters.

“He’s got a broad set of experiences that appeal to us. He can see the game from different perspectives, which I think is a benefit,’’ said Cherington, who is seeking a replacement for Terry Francona after consecutive third-place finishes. “He’s got a good way about him, a sense of humor, mature, and a good reputation from every clubhouse that he’s been a part of.’’

None of Francona’s remaining coaches has been ruled out. But clearly the Sox are focusing their search outside the organization.

The Reds were 20 games under .500 when Mackanin replaced Jerry Narron as manager. He led Cincinnati to a 41-39 record, but there was no reward waiting. Owner Bob Castellini wanted a bigger name and hired Dusty Baker. The same thing happened with Pittsburgh, who passed over Mackanin and hired Jim Tracy.

“If you believe that you need a big-name manager, I can’t convince you otherwise. That’s just your opinion,’’ Mackanin said. “I don’t happen to believe that’s that important.’’

A well-prepared Mackanin then mentioned Whitey Herzog, Bobby Cox, Dick Williams, Gene Mauch, Walter Alston, and Tony La Russa as successful managers who were not particularly well-known before being given a chance.

“I’m not comparing myself to them. I’m better than them,’’ Mackanin joked.

Mackanin, who has been in pro ball for 43 years as a player, coach, scout, and manager, wore his 2008 Phillies championship ring and accessorized his tweed jacket with a Red Sox-red handkerchief in his breast pocket. He also carried an iPad, something that surely caught the eye of the Generation X executives who interviewed him.

“I love statistical analysis,’’ Mackanin said, noting he used it extensively when scouting for the Yankees in 2008. “It’s very important. Numbers mean something.’’

Mackanin’s interview included a test of his managerial acumen as he was presented with tricky in-game scenarios and asked how he would handle them.

The Sox also asked Mackanin about handling players off the field, a skill the new manager must be adept at given the September collapse and clubhouse disunity.

Mackanin described himself as both a players’ manager and a disciplinarian.

“I feel like I have leadership qualities and I feel like I can help this franchise get back to where it once was,’’ he said. “Not that it was ever gone from anything, but I guess there was a little hiccup here. We’re going to put it behind us and move on.’’

From his current boss, Phillies manager Charlie Manuel, Mackanin has learned the value of keeping his finger on the pulse of the clubhouse.

“He doesn’t show panic. He’s very loyal to the players,’’ Mackanin said. “But at the same time there’s some friction there. To me, between a manager and a player there has to be some friction even if it’s just a little bit. Players have to have a little bit of fear of the manager. Not much, just that little bit knowing he’s got the [upper] hand.’’

Mackanin played to his audience when he met with reporters, mentioning that he played for Sox legend Ted Williams when he was invited to spring training with the Rangers in 1972.

“He was my favorite manager,’’ Mackanin joked.

Cherington indicated the initial group of candidates would be narrowed down and interviewed further. He hopes to have a new manager in place before Thanksgiving.

“We’re trying to get a feel for how they would manage all parts of the game,’’ Cherington said.

Mackanin lauded the Sox as being at the “top of the industry.’’

“The way I look at it is, who wouldn’t want to manage the Boston Red Sox?’’ he said.

Perhaps he finally will get that long-sought opportunity.

“I think it’s time for me to manage,’’ Mackanin said. “Certainly there are other candidates, but I’m confident in what I can do. If it’s meant to be, it’ll happen.’’