Resolution on Epstein is expected soon 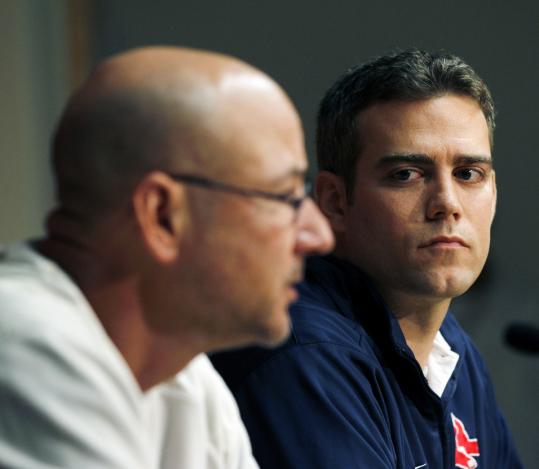 No deal has been struck for Red Sox general manager Theo Epstein to join the Chicago Cubs in an upper management capacity. But major league sources said last night that a resolution is expected in the coming days.

The Red Sox likely would receive some compensation from the Cubs for Epstein, who has a year remaining on his contract. But a far bigger issue for owner John Henry is which Red Sox staffers Epstein would be allowed to take with him to Chicago. Those negotiations are still taking place.

There also is a chance that Epstein could come to an agreement with Henry to stay. But the Cubs represent an opportunity for him to move into a higher echelon within the game and affect more than just the roster. As team president, Epstein would have far-ranging power.

Cubs owner Tom Ricketts has centered on Epstein as the person who can rescue the franchise from decades of futility. The Cubs last played in the World Series in 1945 and have not won it since 1908.

The downside for Epstein would be leaving behind his family and friends in his hometown and the team he grew up rooting for. Only 12 days ago, Epstein vowed he would do everything in his power to fix the Red Sox after two consecutive third-place finishes. He has not spoken publicly since, however.

Under Epstein, the Red Sox won World Series titles in 2004 and ’07. But the team has not won a playoff game since 2008 and suffered a historic collapse this season, going 7-20 in September and blowing a nine-game lead in the American League wild-card race.

The loss of Epstein would be another significant blow to the Red Sox, who have not had a manager since Terry Francona departed Sept. 30, citing attitude problems among certain players.

If Epstein were to leave, the Red Sox have given every indication that senior vice president and assistant general manager Ben Cherington would swiftly replace him. A 36-year-old New Hampshire native and Amherst College graduate, Cherington has been with the Red Sox since 1999.

Cherington was in the room for the Sept. 30 meeting that led to Francona leaving the organization after eight seasons. He since has taken a leading role in the search for a new manager - a process now delayed by the wait for Epstein’s decision.

Cherington was one of the team executives who filled in for Epstein during his break from the organization in 2005 and early 2006 because of a dispute with team president Larry Lucchino. Cherington has the confidence of Henry and has worked closely with Epstein for years in honing the organization’s philosophy.

Chad Finn predicts where the Red Sox go from here
Your comment is subject to the rules of our Posting Policy
This comment may appear on your public profile. Public Profile FAQ