Sox could use speedy resolution 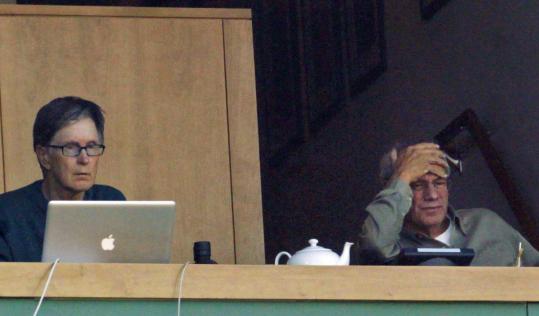 The Theo Watch continues. He’s either going to the Cubs or he’s staying here for more years/dollars/power. Whatever happens, it needs to happen soon. The Red Sox have a lot of decisions to make, including hiring a new manager, but nothing happens until Theo Epstein’s status is resolved.

Sox owner John Henry ended his long, curious silence yesterday, and hinted that maybe we have seen the last of Theo on Yawkey Way.

“Theo is not going to be the general manager forever,’’ warned the low-talking owner, as he sat in a studio at WEEI, the station that pays him millions of dollars per year.

In a wide-ranging interview (simulcast by NESN, a Red Sox property) that lasted almost an hour, Henry and club president Larry Lucchino artfully dodged just about every issue.

They wouldn’t even admit that the Chicago Cubs have asked to talk to Epstein, the worst-kept secret since Andy Rooney’s retirement.

With the Sox in overdrive trying to manage the message (Tass News Agency, anyone?), we look for hints and nuance. We got a little of both when Henry veered off course for a moment and said, “I think there’s a certain shelf life in these jobs. You can only be the general manager if you’re sane. You can only be the manager for a certain amount of time. It’s a tremendous pressure-cooker here, 162 games. It’s a long season, and the pressure here is 365 days.’’

I thought I saw Lucchino wince a little when Henry spilled that one. Maybe not.

Since they did not say, “Theo is under contract for another year and we expect him to fulfill that contract and we are not allowing him to talk with other teams,’’ it’s easy to believe that Epstein might be negotiating with the Cubs at this moment.

“There’s a certain protocol in this game,’’ said Henry. “If someone asks permission for a job that’s not lateral, you give permission. That’s just the way it works.’’

The Cubs position is not lateral. In Chicago, Epstein would have a chance to be team president and GM.

Henry and Lucchino made it clear that big decisions on Yawkey Way are done collectively, saying, “It’s not just Theo’’ involved in their managerial search. They went out of their way to mention Theo’s aide-de-camp, Ben Cherington, who was in the Terry Francona summit meeting last Friday and who served as co-GM when Theo abruptly quit six years ago.

“Theo’s the guy now, he’s been the guy,’’ summarized Henry. “We’ve had tremendous success. We fell apart at the end of the season. As Larry expressed, we’re upset about it. No fan could be more upset than I am about the result this year. But he’s done a tremendous job for us over the last eight years.’’

This was the first time Henry had spoken publicly since the departure of Francona two days after the season went down in flames. Well-prepared Gerry Callahan and John Dennis peppered the Sox bosses and Henry came across as a man who would have drowned without Lucchino.

Citing superior training by the footballers, the Sox owner made several references to his new experience owning the soccer team in Liverpool. Amazingly, Henry was clueless about the country music video (“Hell Yeah, I Like Beer’’) that was shot, in part, at Fenway and featured four Sox starting pitchers.

Events of the last couple of weeks have taught us that the Red Sox, Yankees , and American League East might not be as good as everybody thinks they are. The Sox and Yankees go into this winter with much uncertainty. In this spirit, the Sox need closure to this Epstein drama so they can put their broken team back together.

It’s possible the Sox are trying to hammer out an extension with Epstein before agreeing to let him talk to the Cubs. This could be tough, since some believe Theo is gone at the end of next year, either way. If Theo turns down an extension, Henry and Co. can once again paint themselves as the good guys when the GM leaves for Chicago.

Epstein might be better off going now. Fair or not, in 2011 he is defined by the Carl Crawford and John Lackey signings.

One would think that the managerial search is halted until the Theo situation is resolved. But Henry and Lucchino said otherwise.

When Henry was asked to cite the most important quality for managerial candidates, he stated, “That he fit into organizational philosophy.’’

There you go. Tito, and maybe Theo, come and go - but Bill James, Tom Tippett, and Carmine the Computer are forever.

Keep him or let him go?