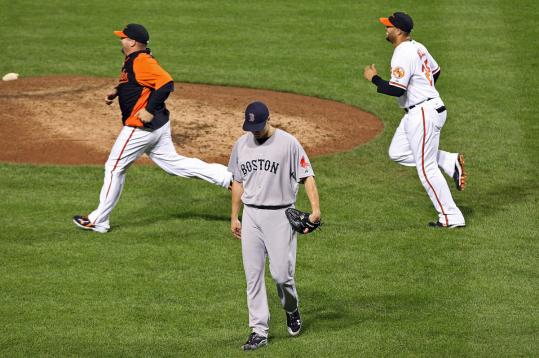 BALTIMORE - The greatest choke in baseball history ended the only way it could have ended, with the Red Sox gagging on the Camden Yards lawn one last time.

Truly unbelievable. This feels like revenge for 2004 and 2007. It is as if the baseball gods are punishing Red Sox Nation for hubris and arrogance and good times that seemed so good, so good, so good.

The Sox were set to pop champagne last night. They were leading the Orioles, 3-2, and the Rays were trailing, 7-0, in the eighth inning. Just a few simple outs and the Sox were going to Texas to start the Division Series tomorrow.

Then the earth opened up and swallowed the Sox and their fans. Stoic Jonathan Papelbon came on to close it out in the ninth, struck out two, then surrendered back-to-back doubles and a walkoff single that $142 million Carl Crawford (typically) failed to catch. Sox lose, 4-3.

Mere seconds later, the Sox were in their clubhouse when Evan Longoria hit the walkoff heard ’round the Gulf to give Tampa Bay an 8-7, 12th-inning victory over the laydown Yankees.

Say goodbye to Terry Francona. Tell Theo it’s OK to talk to the Cubs. This might have been the last roundup for Papelbon, Tim Wakefield, Jason Varitek, Big Papi, J.D. Drew, Miss Heidi, and several of the others you’ve loved all these years.

In the midnight confessions, Francona spoke of “the mess we got ourselves in,’’ then said, “We needed to take care of business and we didn’t.’’

This goes right up there with Denny Galehouse, Bucky Dent, Mookie Wilson, and Aaron Boone (who visited the Sox dugout before the game - how’s that for an omen?). The 2011 Red Sox had a nine-game lead in the wild-card chase on Sept. 3, and now they are out. They are the first team in baseball history to hold a nine-game lead in September, then fail to make the postseason. This makes them worse than the ’64 Phillies or the ’78 Red Sox. They are the poster boys of the Heimlich maneuver.

Reactions varied. Dustin Pedroia said, “You work hard all the offseason and all year to be a good team . . . this is devastating, man.’’

While Wakefield and Varitek, warriors of the bad of ’03 and the triumphs of ’04 and ’07, huddled in one corner of the clubhouse, Papelbon stood up and took the blame.

“For me to say ‘fatigue’ would be an excuse and I’m not looking for excuses,’’ said Papelbon, who threw 28 pitches to finish Tuesday’s win.

Crawford was also front and center.

“If I should have caught it, I could have caught it,’’ he said of Robert Andino’s sinking liner. “I thought I had a good play on it, unfortunately I didn’t come up with it . . . This is very disappointing. We had high expectations and we didn’t live up to them.’’

Adrian Gonzalez chose to take the easy route of predestination.

Wow. That’ll play well in the Nation. And the owner’s box.

The fact is that these Red Sox - the “Best Team Ever,’’ the team Josh Beckett said could win 100 games, wound up losing 20 of 27 games in September.

Sox fan Stephen King could not have imagined a night like this. It was one of the most bizarre evenings in the 111-year history of the franchise.

The Sox led, 3-2 at 9:33 p.m. when the rain came after the top of the seventh. Meanwhile, the Rays were trailing, 7-0. It was like a biblical interruption. Weird.

As rain fell at Camden, a 757 Delta jet waited on the tarmac at Baltimore-Washington Airport. Air Sox flight No. 8884 was bound for one of four destinations: Tampa, Boston, Dallas, or Detroit.

“No problem,’’ said veteran traveling secretary Jack McCormick. “They have maps to every city.’’

During the rain delay, while the Sox watched on television from the comfort of their clubhouse, the Rays rallied from a 7-0 deficit in the eighth and ninth innings, tying the game on a two-out homer by Dan Johnson in the ninth. Truly ghastly.

Twelve minutes after the Johnson homer, the Sox resumed their game with Everyday Alfredo Aceves on the mound for the fourth consecutive night.

In the top of the eighth, the Sox blew a chance for an insurance run when Marco Scutaro was gunned down at home by an excellent relay throw on a Crawford double. That came back to haunt them.

The ninth was a disaster. Papelbon struck out the first two batters, then came solid doubles by Chris Davis and Nolan Reimold (the No. 8 and 9 batters) and the walkoff that Crawford should have caught.

Game, season, dream. It was all over.