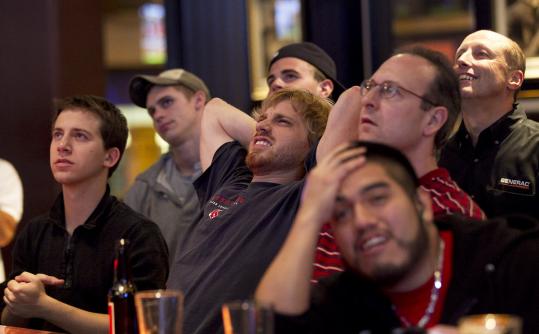 The ghost of Bucky Dent was alive and well last night, as Red Sox fans who watched their team’s crushing loss to the Baltimore Orioles experienced the culmination of an epic September meltdown not seen since 1978.

“I would say that [Sox pitcher Jonathan] Papelbon just blew the game,’’ said a dejected Loni Rodriguez, 24, of Brighton, at the Cask ’N Flagon sports bar near Fenway Park, after the Sox closer gave up the game-winning hit with two outs in the bottom of the ninth inning, for a 4-3 loss, resulting in widespread groans.

“I said he was going to choke,’’ said her friend, Jacqueline Paisner, 24, who wore a David Ortiz jersey and a frown after the devastating defeat.

Seconds later, however, Clint Walker, 28, of Tampa, Fla., leaped into the air and shouted for joy after the Tampa Bay Rays clinched the wild-card playoff spot with a walk-off home run against the Yankees.

While Walker celebrated, many in the mostly younger crowd at the bar quietly filed out.

Earlier in the evening, at least one fan old enough to remember the ’78 season - when the Sox blew a huge lead in the pennant race and lost a one-game playoff to the Yanks on Dent’s infamous home run - said that the last few weeks have been far more wrenching.

Down the road at Cornwall’s pub, Beth Walsh, 47, a Sox fan who lives near Fenway Park, bit her nails at one point before the team’s fate was sealed.

“This is my passion,’’ Walsh said, adding that Red Sox starting pitcher Jon Lester gave the team a great effort. “Lester is the love of my heart.’’

Reflecting the feelings of much of Red Sox Nation, Walsh said that watching the team’s wild-card lead shrink in recent weeks has been agonizing.

“I have a long gray hair that I didn’t have’’ before the slide, she said.

Just a few seats down from Walsh at the bar, Yankees fan Chris Strang, 40, said he was also in an odd position last night.

“I was rooting for the Yankees to lose’’ to help keep the Sox out of the playoffs, said Strang, a Kenmore Square resident.

And that is exactly what happened.

A despondent Tom LeSage, 21, of South Boston, put much of the blame on Papelbon while sipping a beer at the Cask ’N Flagon after the stunning defeat that ended Boston’s season.

“When the game’s on the line you’ve got to throw the right pitches, and he just didn’t do it,’’ said LeSage, who wore a Bruins cap.

Jacki Schromm, 21, of the Fenway, said she felt absolutely awful after the defeat. She also said that with the Red Sox out of the playoffs, business at her establishment, the sports bar Game On, across the street from the Cask ’N Flagon, would suffer in the month of October.

Her friend Jessica Grabiec, 25, of Melrose, said that while she was disappointed, it will hit her mother even harder.

“My mom can’t sleep when the Red Sox lose,’’ she said.

In the midst of all the sadness at Cask ’N Flagon, another Yankees fan, Genna Nolan, 24, of the North End, said that in a way she also felt badly to see the Red Sox go.

Nolan said she had been hoping for a Red Sox-Yankees matchup in the playoffs.

“What Yankees fan doesn’t want to have the Red Sox in the playoffs?’’ she said. “That’s just insane.’’

Globe correspondent Miriam Valverde contributed to this report. Travis Andersen can be reached at tandersen@globe.com. Follow him on Twitter @TAGlobe.