Season on line for Sox tonight 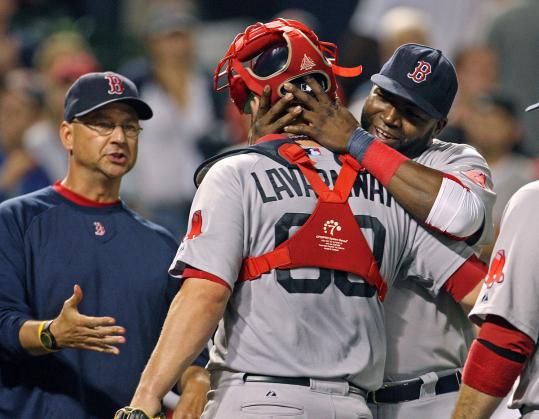 BALTIMORE - So now it comes to this: One hundred and sixty one games played, one to go. Are the 2011 Red Sox going to go down as the greatest chokers of all time or are they going to make the playoffs?

“We’re just going to come in here and play our butts off and see what happens,’’ said de facto captain Dustin Pedroia. “Nobody’s going to have any regrets. We’re going leave it all out there.’’

Once hailed as the “Best Team Ever,’’ the $161 million payroll Sox will be playing for their lives and their legacy at Camden Yards. If they hold serve with Tampa for one more game, they’ll fly to Florida after midnight for a one-game playoff with the Rays tomorrow afternoon. The Sox starter probably will be (gulp) local pariah John Lackey.

There was nothing easy about the penultimate regular-season contest. It’s never easy with these Sox. They watched a four-run lead shrink in the final two innings. Baltimore had the tying run on second and the winning run at the plate when Jonathan Papelbon retired Adam Jones (10-pitch at-bat) on a grounder to third. Papelbon needed 28 pitches to get the final three outs.

“We were hanging on for dear life,’’ acknowledged Francona. “I think this is really good for baseball, but it’s not good for my stomach.’’

“This wears you out,’’ added designated hitter David Ortiz. “This feels like the playoffs already.’’

Let’s hope not. The Sox are 7-19 in September and have played far worse than their record indicates.

On most nights, Lavarnway would have been the big story. Because of injuries to Jason Varitek and Jarrod Saltalamacchia, the hulking Yale grad was forced to make his first big league start behind the dish in the most important game of the season.

Yale has been good to the Red Sox. Thomas A. Yawkey, Larry Lucchino (law school), and Theo Epstein all matriculated at New Haven. Now this. Three days after a Harvard quarterback beat the Patriots, a Yale catcher saved the Red Sox.

On paper, the Red Sox lineup for regular season game No. 161 was underwhelming. Boston’s cleanup hitter was Jed Lowrie (.257, 6 homers, 36 RBIs), Lavarnway batted sixth, and the No. 7 hitter was .232-hitting Darnell McDonald.

On the mound was Erik Bedard, a lefthander with a 5-9 record who’d won exactly one game since he was acquired at the end of July. Bedard had pitched only once since Sept. 3, and failed to finish three innings in that outing.

This Boston unit did not scare the oft-beaten Orioles. Loving their role as spoilers, perhaps pressured by manager Buck Showalter (who hates the Red Sox), the Zer-O’s have been approaching these meaningless late-season jousts like playoff games. Showalter ordered an intentional walk in the first inning of Monday night’s win and was no less engaged last night.

With two on and one out in the fourth, Lavarnway powered a 3-2 pitch over the fence in left to give the Sox a 5-1 lead.

Fortunately, Francona summoned Alfredo Aceves, who got out of the jam. The Mexican righty has pitched in each of the last three games and Francona said he’d probably need him again tonight.

It was 8-4 after Lavarnway’s second blast in the eighth, but Baltimore scored a pair off Daniel Bard in the bottom of the inning and had the tying run at the plate. The ninth was pure high wire.

“I’ve played with Pap since I signed,’’ said Pedroia. “Every time he gets the ball I relax. I know the game is in the best guy’s hands.’’

Clearly, the Sox are a shell of their former selves. Even if they make the playoffs they will stand as the worst September team in playoff history. When you look at them now, it’s hard to believe they were 81-42 over a fourth-month stretch after their 2-10 start.

All eyes will be on Lester. In his last four starts, Lester is 1-3 with a 6.97 ERA. He rarely has pitched on only three days’ rest, but the Sox have no choice. If they clinch tonight, they will play a best-of-five series starting on the road Friday in either Detroit or Texas.

They still could win or lose the wild card outright.

Here’s hoping there’s no champagne nonsense or “wild-card champion’’ T-shirts if they seal the deal in Baltimore. There’s nothing celebratory about any of this. If the Sox somehow can win out, they need to regroup and start thinking about the ALDS. The sooner they forget September the better.