THIS STORY HAS BEEN FORMATTED FOR EASY PRINTING
Orioles 6, Red Sox 3 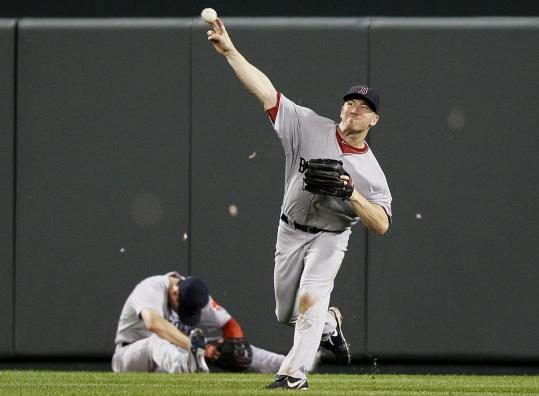 J.D. Drew fires to the infield after retrieving a ball dropped by Jacoby Ellsbury, who hit the wall hard in center. (Patrick Semansky/Associated Press)
By Peter Abraham Globe Staff / September 27, 2011

BALTIMORE - The historic collapse of the Red Sox is nearly complete. They had a nine-game lead in the American League wild-card race Sept. 3 and have given it all away.

For the second time in six days, Josh Beckett could not handle the last-place Orioles as the Sox were beaten, 6-3, at Camden Yards.

Beckett gave up six runs in six innings as the Sox fell into a tie with the Rays for the wild card at 89-71. The Rays beat the Yankees, 5-2.

If the race is not decided in the final two games, the teams will meet Thursday at Tropicana Field to decide the playoff spot.

“There’s not much to say. We need to come out and win tomorrow. We’ve backed ourselves about as far as we can go,’’ said Sox manager Terry Francona, whose job security is tenuous at best at this point.

“We have to come out and play good baseball,’’ second baseman Dustin Pedroia said. “We’ve all worked really hard all year. It’s been a long season and had its ups and downs. We have two games left. Come out tomorrow and we’re going to play as hard as we can, I promise you.’’

The Sox appeared to have tapped into some lost energy with a 7-4, 14-inning victory in New York against the Yankees Sunday night. Then they lost to last-place Baltimore for the third time in four games.

The Sox led, 2-1, before the Orioles scored a run in the fifth and four in the sixth against Beckett (13-7).

Trailing by four runs, the Sox left the bases loaded in the eighth inning as Jarrod Saltalamacchia struck out and Marco Scutaro grounded into a force play.

There was a spark of life in the ninth against Orioles closer Jim Johnson. Pedroia had an RBI single with one out. David Ortiz’s infield single got Adrian Gonzalez to the plate as the tying run.

Gonzalez flied to left and Jed Lowrie struck out swinging. The Sox left 12 runners on base, seven in scoring position.

“We still control our own destiny,’’ said Gonzalez, noting that the Sox can claim a playoff spot with three straight wins.

But there’s little evidence to suggest that is likely. The Sox have not won consecutive games since sweeping a doubleheader against Oakland Aug. 27.

Meanwhile, injuries are mounting. Saltalamacchia left the game in the eighth when he was struck on the right collarbone by a foul tip. He was starting in place of Jason Varitek, who was scratched from the lineup with a bruised right knee. It is uncertain if either catcher will be available tonight.

The Sox will send Erik Bedard to the mound tonight. Jon Lester is expected to start on three days’ rest tomorrow.

“We’re all going to play as hard as we can. I’m going to leave everything on the field,’’ said Pedroia, one of the few players to speak at length after the game. “I’m not going to have any regrets about this season, that’s for damn sure.’’

The Sox had bountiful chances to score in the first two innings against Tommy Hunter but came away with only one run.

Pedroia walked with two outs in the first and went to third on a double by Ortiz. The Orioles then intentionally walked Gonzalez to load the bases for Lowrie.

Lowrie swung at the first pitch and popped to left to end the inning.

Scutaro was on first base with two outs in the second when Jacoby Ellsbury doubled to the gap in left. Scutaro stopped at third but scored when the throw from left fielder Matt Angle went awry.

Matt Wieters made it 1-1 in the bottom of the inning with a home run to left. The Sox took a 2-1 lead in the fourth when Lowrie homered to right.

After the home run by Wieters, Beckett did not allow another hit until Adam Jones led off the bottom of the fifth with an infield single.

Mark Reynolds walked before Chris Davis singled to center to make it 2-2. Baltimore loaded the bases, but Beckett held it there. Then disaster struck in the sixth.

With two outs and a runner on second, Beckett walked the free-swinging Reynolds. Davis gave Baltimore a 3-2 lead with a double down the line in right. Beckett was trying to throw a changeup in the dirt and left it high.

Robert Andino was next and he hit a fastball on a line over the head of Ellsbury in center. Ellsbury raced back and caught the ball reaching over his shoulder just as he collided with the wall. The ball was jarred loose and Andino raced around the bases for a three-run inside-the-park homer.

“I hit it about as hard as I could run while looking up at the ball,’’ Ellsbury said. “Right as I caught it, I hit the wall and it popped out.’’

The relay throw beat Andino to the plate, but Saltalamacchia could not handle it.

In the top of the seventh, a fan ran on the field and made several obscene gestures in front of the Sox dugout. He remained on the field for several minutes as police officers did little other than watch. Given the month the Sox have endured, it didn’t seem unusual.

Beckett has allowed 12 runs in 13 1/3 innings against the Orioles in his last two starts.