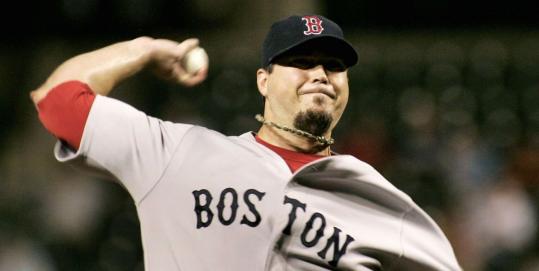 Josh Beckett lets loose with a pitch against the Orioles, but he couldn’t secure a crucial victory. (Joe Giza/Reuters)
By Nick Cafardo Globe Staff / September 27, 2011

If this is to be the worst Red Sox collapse since 1978, the simplest explanation is that their pitching has been mind-boggling horrible.

How on earth have their top two starters, Josh Beckett and Jon Lester, gone 1-5 with an 8.18 ERA in their last six starts since Sept. 11 - right smack in the middle of crunch time?

Last night, in a 6-3 loss to the Orioles, one could see a microcosm of how the pitching has contributed to this epic free fall.

In a 24-hour period, this team went from the high of Jacoby Ellsbury’s 14th-inning three-run homer Sunday night that beat the Yankees and seemed to breathe life into a dying bunch, to the low of Beckett allowing four runs in the sixth inning to put Boston in a tie in the wild-card race with Tampa Bay, which beat the Yankees last night.

This is not what they envisioned from Beckett.

The feeling was he would carry the momentum and bring the Sox that much closer to clinching. Instead, they went from extreme confidence to extreme pessimism in a matter of hours.

The team didn’t arrive at its hotel until 4 a.m. after Sunday night’s 5-hour-11-minute game. But the lack of sleep should have been overcome because of the urgency of the game.

But in a month of so many disappointing moments, this was the worst because it was so important.

“We’ve got to win games,’’ Beckett said. “You’re not gonna do it when the starting pitcher gives up six runs.’’

Beckett was so angry at himself that when a reporter started out a question by suggesting Beckett had pitched a good game, the righthander snapped, “What game were you watching?’’

Beckett, whose record dropped to 13-7 and whose ERA rose to 2.89, said he left too many pitches out over the plate. The crisp fastball and curveball just wasn’t there last night.

Beckett said there was nothing wrong with his left ankle, which sidelined him for a start. There were no excuses to reach for, and Beckett wasn’t having any of them anyway. He knew he didn’t perform in the biggest game of the season.

Beckett was forced to throw to Jarrod Saltalamacchia instead of his usual catcher, Jason Varitek, after Varitek was pulled from the starting lineup when his right knee, which was hit by a pitch Sunday night, stiffened up.

Beckett said he knew from the beginning that Varitek was not going to catch and he didn’t put much stock in the theory that that could have been a reason for his failure.

The man who won Sunday’s game was involved in the play that helped produce the loss last night.

Ellsbury broke back on Robert Andino’s long drive to center in the sixth inning, tracking it close to the fence. He had the ball in his glove until he crashed into the fence and the ball was dislodged.

The collision stunned Ellsbury for a moment, and by the time he retrieved it and shoveled it off to J.D. Drew, Andino had a three-run inside-the-park homer that pretty much sealed it for the Orioles.

“It was a great effort,’’ Beckett said of Ellsbury’s attempt. “His back is to me so I don’t know what happened. I appreciated that effort. I knew he hit it pretty good because I threw it right down the middle. I figured if anybody could catch it it would be him.’’

Beckett has allowed 12 runs in 13 1/3 innings against the Orioles in his last two starts. He also allowed a season-high six runs. The reason for the Orioles’ dominance?

“I guess it just comes down to making pitches,’’ he said. “You can’t throw balls over the middle of the plate.’’

The Sox face great uncertainty in the final two games of the season. Erik Bedard will face his old team tonight and he’ll be trying to extend the 2 2/3 innings he pitched last week in his first start back from a lat strain and a sore left knee.

He’s received extra rest, so he should be ready to let loose. Bedard could not only win to help the Sox keep pace, but he could even earn a spot in the postseason rotation if they can right the ship.

And then tomorrow night in the season finale, the Sox will give the ball to Lester. There’s no other choice after last night’s loss. The Sox would have to start the playoffs without their best pitchers, but lately their best haven’t been at their best.

“I have a lot of faith in those guys,’’ Beckett said. “I’ve been with Lester for a long time and I can’t think of anyone I’d rather have out there. Erik has done a good job since he came over here. He’s had tough luck.’’

There was no tough luck for Beckett, just major disappointment.

Aces are supposed to win consistently at big times. This was one of those big times.

The Sox still have a piece of the wild-card lead, but they could have been in control with a win and shaved one more day off the calendar.

While an intriguing and interesting race, and good for baseball, this spells big trouble for the Red Sox.

Beckett had a chance to bring them home.

Instead, he put out the welcome mat for the Rays.