Spoiling for a fight 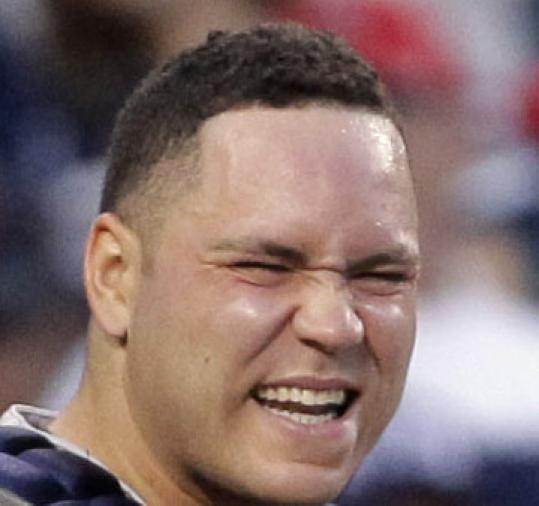 ‘Anything to get the Red Sox out. That would be awesome for me.’
(Jae Hong/Associated Press)
By Amalie Benjamin Globe Staff / September 23, 2011

NEW YORK - Facing the Red Sox, even in a race to the postseason, often makes players dance around questions. Not so for Russell Martin.

“Anything to get the Red Sox out,’’ the Yankees catcher said yesterday before facing the Rays. “That would be awesome for me.’’

“I hate the Red Sox,’’ he said. “They are fun to play against because they have a quality team and they’re gritty and they play hard and stuff. But I’d love to see them lose.’’

Martin, who was a free agent last offseason, was considered by the Red Sox, though they were wary of his injury history. He signed with the Yankees, and has been an excellent acquisition.

Perhaps that has played into his disdain for the Sox. That, or Martin has really bought into the rivalry.

“I guess it just comes with the territory,’’ he said. “When you wear the pinstripes, you just kind of learn to be that way, I guess.

“They gave us a hard time all year, but I don’t think we’re scared of them or anything. We’ll see what happens.

The Yankees have a chance to play spoiler with both the Red Sox and Rays, facing Boston in three games this weekend at Yankee Stadium before heading to St. Petersburg, Fla., to end the season with three games against the Rays. The Yankees lost to Tampa Bay here last night, 15-8, finishing a four-game series.

The rest of the Yankees might refrain from offering such an outspoken opinion on teams in contention for the postseason, but that doesn’t mean they don’t care. Or that they don’t know they can be a significant factor in whether the Red Sox, Rays, or Angels win the wild card.

“Keeping the Red Sox out and playing the Rays? The Rays played us tough, too,’’ said Yankees ace CC Sabathia. “The Angels took two out of three last time we were there. All three of those teams are good, and it’s going to be tough.’’

The Red Sox have dominated the season series against the Yankees, winning 11 of 15 games. But the Sox are in a nose dive, and the Yankees have just taken a series from the Rays. There’s a lot that could come out of the series. There always is when the Sox and Yankees face off.

“I don’t ever like to fuel anything. That’s the bottom line. But boys will be boys.’’

Martin is new to the rivalry, having spent the first five years of his career with the Dodgers. They have their own heated rivalry with the Giants, but the American League East version has clearly made an impression on the catcher.

Girardi, who has spent far more time than Martin immersed in Red Sox-Yankees, didn’t have the same feelings when he was a catcher for New York.

“I don’t necessarily think that I hated the Red Sox,’’ Girardi said. “I knew it was a big rivalry and I knew the importance of the game, but ‘hate’ is a strong word.’’

But hate or not, Red Sox or not, Girardi said the Yankees aren’t going to coast into the playoffs. They want to win, they want momentum. They want to be ready for the first round, no matter which team they’ll be facing.

“I’m not taking my foot off the gas and I don’t expect our guys to, either, because we want to be playing well and you want to be feeling good about yourself going into the playoffs, and you want home-field advantage.’’

Because it’s not just about making life miserable for the Red Sox this weekend or for the Rays next week. It’s about finishing the season the way they want to finish it.

“It’s good baseball,’’ Martin said. “These teams are going to be fighting for it. Just, it would be fun to be the spoiler. And get 100 wins.’’