It starts with starters

Sox are being buried under mound of woe 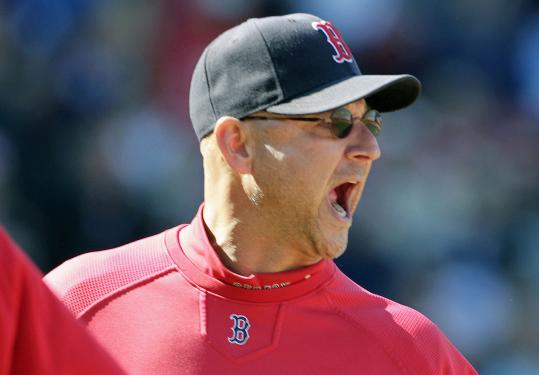 Manager Terry Francona believes the Sox have done a good job of fighting the frustration that can come during a long slump. (File/Jim Davis/Globe Staff)
By Peter Abraham Globe Staff / September 23, 2011

Josh Beckett walked off the mound with one out in the eighth inning Wednesday night having allowed four runs against the Baltimore Orioles.

Two runners were on base and Beckett had already lost a three-run lead. On a night when the desperate Red Sox needed their presumptive ace to carry them to an important victory in the race for a playoff berth, Beckett had failed.

But the crowd at Fenway Park rose when Beckett approached the dugout, cheering him. Given how the starters have performed in recent weeks, Beckett’s uneven performance somehow seemed heroic to fans starved for success.

It was akin to congratulating the fire department for saving the mailbox while the rest of your house burned down.

“You want to pitch good all year long, especially when your team needs you,’’ Beckett said. “You need to give them innings, and quality innings, and that was something I wasn’t able to do.’’

Beckett, Jon Lester, John Lackey, Tim Wakefield, Andrew Miller, and Kyle Weiland have produced two quality starts since Sept. 3. One was by Lester Sept. 6 against Toronto, the other by Beckett Sept. 16 against Tampa Bay. Those are two of the four games the Sox have won.

In their other two victories, the Sox scored 18 runs each time. They have not won consecutive games since sweeping a doubleheader from Oakland Aug. 27.

Sox starters have averaged just over 4 2/3 innings during the team’s collapse, putting stress on the bullpen. Even with an expanded September roster, the Sox have worn out their relievers.

Daniel Bard has appeared in seven of the 18 games and given up 11 runs over 7 1/3 innings. Jonathan Papelbon, nearly perfect since mid-July, blew a save Tuesday. Alfredo Aceves has thrown 16 innings this month and is 22 2/3 innings over his previous career high for a season.

“Everybody’s trying,’’ Bard said. “It’s been rough on all the pitchers, not just the starters. I’ve never seen anything like this before. You have to hope that it evens out and we’ll get it back.’’

The Sox were off yesterday and manager Terry Francona said he welcomed the respite if only to rest his relievers.

“It certainly gives you a chance to regroup,’’ he said after Wednesday’s 6-4 loss.

The Sox start a season-ending six-game road trip tonight at Yankee Stadium. They have a two-game lead in the wild-card race on Tampa Bay, which won in New York last night. The Angels lost at Toronto and fell three games back. .

Lester will start tonight. Like Beckett, he has been part of the problem. The lefthander has allowed eight earned runs on 13 hits and seven walks in his last 11 innings, losing two games against the Rays.

Wakefield, who has a 6.19 ERA during the collapse, is scheduled for tomorrow.

Francona has not named a starter for Sunday. The Sox were trying to make a deal for Mets lefthander Chris Capuano to start that game, but it fell through. Because he would have been obtained after Aug. 31, Capuano would not have been eligible for the postseason roster.

A team source said it was unlikely the Sox would be able to obtain a starter, although all avenues were being explored.

Without a trade, the Sox may be forced to start Lackey, who, based on his 6.49 ERA after 27 starts, is having the worst season for a starting pitcher in franchise history.

Francona is left with trying to cobble together a rotation around Beckett and Lester while keeping his other players from feeling the effects.

“The one thing you need to do is fight the frustration,’’ Francona said. “Like, ‘Oh, no. Here we go again.’ I think we’ve actually done a pretty good job with that.

“It’s certainly easier to win when you’re getting length out of your starters. You’re not putting as much burden on your bullpen. You have the ability to match up maybe a little bit more. Regardless of how we do it, we’re supposed to win.’’

But constantly playing from behind is clearly weighing on the position players. Dustin Pedroia declared the Sox a “[expletive] team’’ for losing so many games this month.

“Seems like no matter what we do, it’s going to be bad,’’ David Ortiz said.

In a strange twist of fate, the Yankees have played a big role in keeping the Sox ahead in the wild-card race by playing so well against the Rays this week. Now the Sox head for New York hoping their pitching can somehow rebound against the division champions.

“We’ll be excited,’’ Francona said. “We’ll get ourselves set up and go see if we can play a little bit better.’’