Long third inning does in Bedard 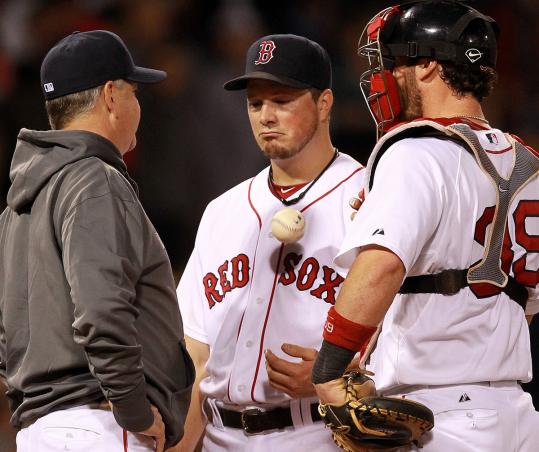 Erik Bedard didn’t need a thesaurus to describe the third inning of the Red Sox’ 7-5 loss to the Orioles last night.

He summed it up in one word.

He hadn’t started since Sept. 3 because of a sore knee and a left lat strain, and after the long layoff manager Terry Francona wanted to keep him on a pitch limit.

There was no way, Francona said, Bedard would come anywhere near 100 pitches.

He wound up throwing 54 in the third inning alone, giving up four runs (just one earned) on three hits. His night lasted just 2 2/3 innings as the Sox took their fourth loss in the past five games.

“It was a long inning,’’ Bedard said. “I just tried to battle and tried to limit the damage.’’

The plan in Bedard’s first start back was for him to mix his pitches early and try to get some quick outs.

Through the first two innings he threw 22 pitches and faced just eight batters.

But after Nolan Reimold popped to first to start the third, there was nothing quick about Robert Andino’s at-bat.

It was 13 pitches long. He fouled off seven, spoiling some of Bedard’s better curveballs and changeups along the way.

Andino singled, then scored on a Nick Markakis double to make it 1-1.

But what may have hurt Bedard more than the amount of pitches that inning was a misplayed fly ball by Josh Reddick. Vladimir Guerrero shot a liner to right field, and instead of going backward, Reddick took his first step in. He had to hop up for the ball but couldn’t haul it in. It bounced off his glove for his fifth error of the season.

Markakis scored to put the Orioles up, then everything snowballed.

“We get the line drive that Vlad hit that we don’t convert, that cost us 23 pitches and runs - that was probably bigger than anything else,’’ Francona said. “I thought he was actually going pretty well and then that inning just got so long. The hope was it would have been over.’’

Bedard walked Matt Wieters and Adam Jones then gave up a two-run single to Mark Reynolds. By the time the inning was over, the Sox were in a three-run hole.

“It’s the worst feeling ever knowing that you made your starting pitcher work a lot harder than he should have on a ball that should have been caught to end the inning,’’ Reddick said. “Especially losing the lead like we did.’’

Francona pulled Bedard after he gave up the single to Reynolds. It was his second-shortest start of the season behind his last start for the Mariners July 29 against the Rays and it was just the seventh time in his career that he failed to go at least three innings in a start.

Saltalamacchia said he thought Bedard handled the adversity well. His ERA in seven starts with the Sox is now 3.63.

“He went in there with the stuff that he felt good with. We were working good. The long at-bat with Andino might have tired him out a little bit. I just saw him go out there and battle.’’

On top of the Sox’ struggles this month and his own injury issues, Bedard, according to a report in the New York Post, was served with child support papers hours before his start.

It was one of several things weighing on the Sox as they cling to a two-game lead over the Rays in the wild-card race with just seven games left.

“If you play a sport, you have to put all that stuff aside,’’ Bedard said. “If you let all that outside stuff get to you, you can’t focus out there.’’