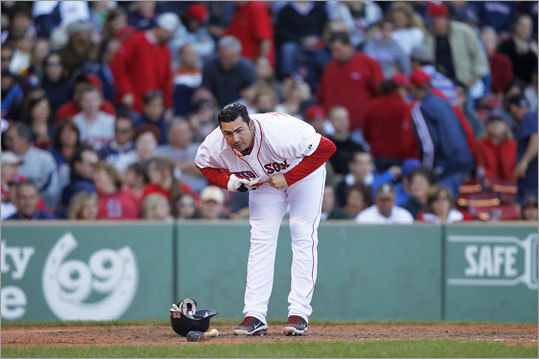 The Red Sox were on pace to win 100 games a few weeks ago and claim home field in the American League playoffs. The big debate was which player most deserved to be MVP: Jacoby Ellsbury, Adrian Gonzalez, or Dustin Pedroia.

Now the only question is who to blame for the debacle that has ensued.

The collapse continued yesterday with an 8-5 loss to Tampa Bay. That’s nine losses in the last 11 games for the Sox, who lead the Rays by two games in the wild-card race with 10 to play.

The Sox held a nine-game lead in the wild card Sept. 2. Now they’re in the uncomfortable position of trying to hold off the Rays, who are younger, healthier, and apparently more driven to play in October.

Pedroia claimed he was “really confident’’ the Sox would find their way out of the dark.

“We’ve got a great team. We’re just not playing very good. We have to figure it out,’’ he said. “We’re not going to sit back and feel sorry for ourselves for playing like crap.’’

But confidence is otherwise in short supply around Fenway Park. General manager Theo Epstein had a glum look as walked to his office after the game, pausing in a hallway to stare at a framed newspaper page from the 2007 World Series.

The players rushed out of the clubhouse, eager to leave the gloomy atmosphere. Even the September call-ups, along for a ride that has taken a wrong turn, looked stunned.

“We’ve got to figure out a way to turn it around. I guess I choose to believe that, knowing the guys down in that clubhouse like I do, we’ll meet this challenge and it’ll make us stronger,’’ manager Terry Francona said “That’s our best way to go about this.’’

The Rays were chortling after the game. They won three of four in the series and are 12-6 against the Sox this season, 7-2 at Fenway Park.

Seven of Tampa Bay’s 10 remaining games are against the Yankees and Maddon laughed at the idea of his team forcing Sox fans to root for the Yankees.

Said Francona: “Regardless of what’s happened, we’re not behind. The good news is that if we hold off Tampa, we wouldn’t have to play them in the playoffs, because they’re having their way with us.’’

The Sox had eight hits but were 2 for 11 with runners in scoring position. Trailing, 4-0, they rallied but never got closer than two runs.

In what could prove to be his final appearance at Fenway Park, Wakefield (7-7) lasted only five innings. He gave up six runs on six hits with one walk and five strikeouts.

The errors and passed balls made only two of the runs earned. The Rays scored two more runs off Andrew Miller in the seventh inning. Matt Joyce was 3 for 4 with three RBIs for Tampa Bay.

Rookie Desmond Jennings continued to haunt the Sox, going 2 for 5 with a run scored (he had seven in the series) and an RBI.

“It’s been frustrating for all of us. We just need to play better baseball,’’ Wakefield said. “It’s blatantly obvious that we’re not playing very well right now. Something has to click; I don’t know what it is. We’ve got to get some confidence.’’

The Sox knocked Tampa Bay starter David Price out of the game after four innings. He took an Aviles line drive off the chest in the third inning and initially stayed in the game. But after Darnell McDonald had a two-run double in the fourth, Price was removed for precautionary reasons after the inning.

Aviles had a three-run homer in the seventh. The Sox stranded runners at second base in the eighth and ninth.

“If we go out and play baseball the way we know how, we’ll be fine,’’ said Aviles, who was 6 of 13 in the series with four extra-base hits filling in for the injured Kevin Youkilis.

“We’re not down. We haven’t played the best of ball but we’re not down. Any time you have the lead, you should be in that driver’s seat. We hold our own destiny.’’

The Sox play a day/night doubleheader against the Orioles today. A foundering team rests its fortunes on rookie Kyle Weiland in Game 1 and John Lackey and his 6.19 ERA in Game 2.

If this isn’t rock bottom, it’s coming up fast.

“We have managed to play some very inconsistent baseball,’’ Francona said. “Now we’re going to see if we can dig ourselves out of it. Just go play the way we can.’’