Finally at Fenway in her 88th season 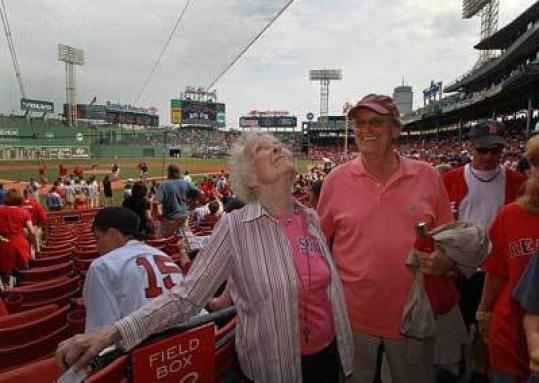 Jason Varitek, Betty Johnson’s favorite player, hit a two-run homer in the second inning, giving the Red Sox a lead they wouldn’t relinquish. When the rain started in earnest for the second time, her group decided it was time to call it a day.

“I was fine with leaving,’’ Johnson said. “We had seen just about everything, and I was pretty sure the Red Sox were going to win. And if they weren’t, I didn’t want to see that.’’

Sometimes the best things in life are savored with expectation. Such was the case for Johnson, who attended her first Red Sox game at Fenway Park on Aug. 27 in the year she turned 88.

What took so long?

“Well, I don’t know,’’ said Johnson, who grew up in Somerville and lives in Wenham. “No one ever asked me to go, I guess, and I wouldn’t want to go by myself.’’

In honor of Johnson’s first visit to Fenway, the Red Sox cooperated by thrashing the Oakland A’s, 9-3. Mother Nature did not cooperate, thrashing Fenway the day before Tropical Storm Irene hit New England. The game - the first of a doubleheader that day - was delayed by rain twice, for a total of three hours. The downpours may have put a damper on the game, but not so on Betty’s spirit.

Johnson’s children came up with the idea to take her to the game. Son David, of Hamilton, shares a season-ticket package so he arranged for the seats on the third-base side. Another son, Peter, came in from New York with his wife, Sally. Daughter Priscilla Johnson of Beverly and David’s wife, Dede, filled the supporting cast. Johnson’s two other daughters, Nancy Lee Harris of Newton and Emily Johnson of Hartford, texted and phoned the Fenway group during the game.

For Johnson, who wore a pink Red Sox shirt, a present from daughter Priscilla, the best part of the day was having her children with her.

Fenway, baseball’s oldest and smallest park, lived up to her expectations.

“The grass was beautiful,’’ she said. “Our seats were terrific. Well, my seat was a little hard. I could have used a cushion. Don’t you find the seats a little uncomfortable? But, other than that, it was wonderful. The players looked so close. It was such a nice time, the rain didn’t bother me at all.’’

It wasn’t until fairly recently that Johnson became a diehard fan of one of baseball’s oldest franchises. It was the advent of a new technology that helped her become a follower of the team that finished last the year she was born.

“She just hasn’t been all that interested in baseball,’’ Peter Johnson said. “She grew up in the area, raised five children, was very involved in town affairs and local stuff. There was just all sorts of stuff she was interested in. So it wasn’t really until this century when she and my father started slowing down that they got a new HD TV, and she started watching the Tour de France, and Tiger Woods, and the Red Sox, and said, ‘Wow, these guys are really interesting.’ ’’

Betty Johnson watched the games with her husband, Bob, whom she met at a school dance at Middlebury College in 1940, until his death a year ago. The Sox winning the World Series in 2004, their first in 86 years, also helped put her on the Red sox bandwagon.

“Oh, yeah, she was crazy about the whole Johnny Damon team, and Pedro Martinez,’’ Peter Johnson said. “She still is delighted to see some of the guys from that team who are still playing. She was delighted when Varitek hit a home run on Saturday.’’

So when is she going back?