THIS STORY HAS BEEN FORMATTED FOR EASY PRINTING
Blue Jays 1, Red Sox 0 (11 innings) 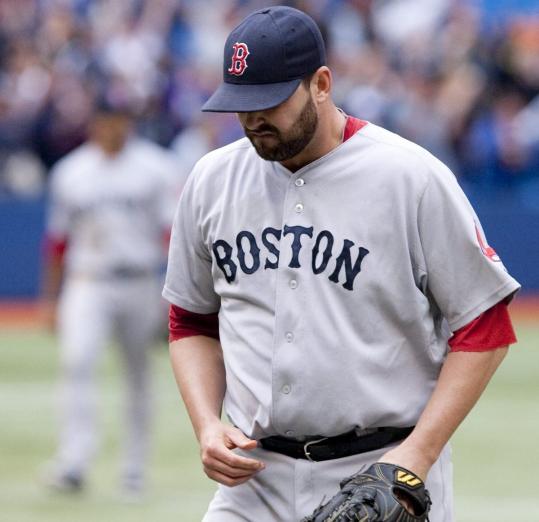 TORONTO - When Josh Beckett walked slowly off the mound in the fourth inning favoring his right ankle yesterday, did any hope of the Red Sox advancing deep into the postseason go with him?

The Sox will send their best starting pitcher back to Boston this morning to get checked by a specialist and determine the extent of the injury he suffered while throwing a pitch to Toronto’s Brett Lawrie.

Beckett said the sensation in his foot was unlike anything he had felt before. For now, the team is describing it as a sprained ankle.

“It’s something in my ankle, I’m not sure what,’’ Beckett said. “It’s always concerning. That’s my power leg. With the way I pitch, I don’t think I can cut my leg off. It’s definitely stiff.’’

Earlier in the day, the Sox announced that another starter, lefthander Erik Bedard, would skip his next start because of a sore left knee. He has a strained ligament.

As the postseason approaches, the Sox may be scrambling for healthy starters.

“It’s pretty bad timing,’’ Beckett said. “But I could be back out there in six days. We’ll see. Let’s not put the cart in front of the horse. Let’s do our due diligence.’’

To cap what turned into an all-around sour day for the Sox, Lawrie belted a walkoff home run in the 11th inning to give Toronto a 1-0 victory.

The Sox have dropped four of their last five games and now trail the Yankees by 2 1/2 games in the American League East, their largest deficit since July 2.

Of suddenly greater significance is that the Sox lead Tampa Bay by seven games in the wild card with 22 to play. The teams will play each other seven more times.

The Sox were limited to seven hits yesterday, shut down by 21-year-old rookie Henderson Alvarez and four relievers.

The immediate concern is Beckett. He was working on a three-hit shutout with one out in the fourth and had struck out six when Lawrie came to the plate with a runner on.

Beckett threw a 1-and-1 curveball and landed awkwardly, appearing to have caught his spikes in the rubber. He stayed in the game, trying a pickoff throw to first base before throwing a 94-mile-per-hour fastball just off the outside corner.

Beckett then walked to the back of the mound as catcher Jason Varitek came out from behind the plate and motioned to the dugout. Francona and head athletic trainer Mike Reinold came out to attend to the pitcher.

“I felt it on the second-to-last pitch. It felt a little bit different on the last pitch I threw. It was bothering me,’’ Beckett said. “It felt like it was locked up and then like it popped in and out of the socket or something.’’

“We really don’t know. It was getting stiff and it was getting sore, so we got him out of there,’’ Francona said. “Now we’ll see what’s going on in there.’’

But there were some positive signs. Beckett was not on crutches and did not have his ankle wrapped when he pulled on his monogrammed cowboy boots.

“I could wake up tomorrow and feel like playing basketball,’’ said Beckett, who will be examined today by Dr. George Theodore at Massachusetts General Hospital. “We’ll just see.’’

Beckett fell in the bullpen before the game when he slipped on concrete while warming up. But he didn’t believe that had any effect on his ankle, stressing several times that he was in no pain until the third pitch to Lawrie.

Beckett is 12-5 with a 2.49 earned run average and has dominated the Yankees in four of his five starts against them. His loss would be crushing to a team with a thin rotation.

“Obviously, he’s been our best guy from Day 1,’’ reliever Daniel Bard said. “It doesn’t sound as bad as they first thought, so I really don’t know what’s wrong with him. No one seems to be panicking, but obviously we need him down the stretch.’’

Clay Buchholz, out since June with a stress fracture in his back, recently has started throwing but would not seem to have the time to build up enough arm strength to start.

Aceves filled in admirably for Beckett yesterday, throwing 3 2/3 innings of relief and striking out four. After Bard and Jonathan Papelbon combined for 2 2/3 innings of one-hit relief, Dan Wheeler (2-2) allowed a long home run to left-center by Lawrie.

The Sox left 10 runners on, seven in scoring position.

“When you’re playing on the road, at some point you give up a run and you go home not feeling good about yourself,’’ Francona said.