Catcher still gets geared up

Varitek excelling in his current role 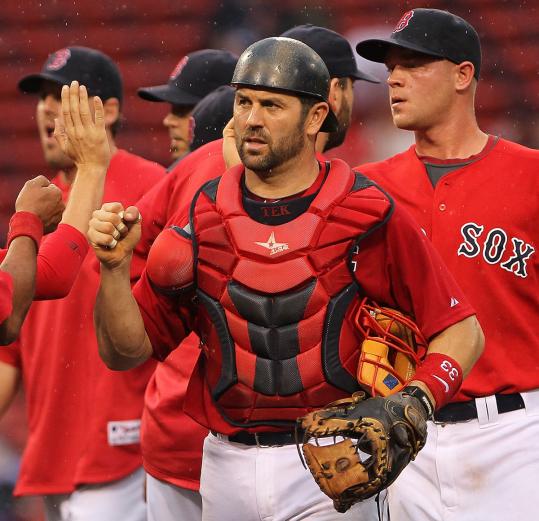 Jason Varitek was front and center in the Red Sox’ win in Game 1 of a doubleheader Saturday. (Jim Rogash/Getty Images)
By Michael Vega Globe Staff / August 29, 2011

Wearing a white terry-cloth poncho that hid the ice packs on his knees, shoulders, and back, Red Sox catcher Jason Varitek met the media following a 9-3 victory over the A’s Saturday, the first game in what ended up a day-night doubleheader sweep of Oakland at Fenway Park.

Instead of staging his postgame interview in front of his locker in the clubhouse, as is his custom, Varitek was invited to the interview room on the mezzanine level of the ballpark.

When he sat down, a seemingly bemused Varitek stared out at the assembled media corps.

But not quite as cool as the Sox captain, whose presence once again proved invaluable as Jon Lester earned his 14th victory of the season. But Varitek also provided some sock with his bat, going 2 for 4 with a two-run homer in the second inning that was part of a three-run outburst that broke a 1-1 tie.

With the final month of the regular season just around the corner, Varitek was asked if he was as pleased as manager Terry Francona seemed to be with his playing time; he’s sharing the catching duties with Jarrod Saltalamacchia.

Varitek chuckled and replied, “You’re asking me after a six-hour game?’’

The ice packs should have been a dead giveaway.

“Terrible,’’ Varitek said dryly. “If you had asked me after that Tampa game [that went 16 innings], terrible. I mean, it’s been different spikes at different times. In our position, we have to go out and do stuff with [Gary] Tuck [catching instructor], and if something happens you have to be ready to go into games.

“But we’re constantly grinding, warming people up, doing things. At different times I have to learn to back off, just because I’m not 22 anymore.’’

“I think he still has got a lot left,’’ Francona said. “I think he’s proven it. I think the playing time he was getting was just about perfect, he’s kept himself in such great shape.

“But he’s caught a lot of games. You don’t want to run him out there more than we’ve been because it’s not fair to him. But the way he’s been catching has been really, really good. And our production out of our catching has been tremendous.’’

Varitek and Saltalamacchia combined to go 4 for 8 in the sweep, with a homer, a double, and 5 RBIs.

Varitek has hit safely in his last five games, batting .300 with 2 homers and 5 RBIs in that stretch.

“I think the basic goals are to win today and to prepare to win tomorrow,’’ said Varitek, who, like the rest of his teammates, had offdays yesterday and today before tomorrow’s visit from the Yankees for a three-game set. “And to learn and to see what goes on every day with the pitching staff, whether you’re playing or not.

“As we saw last year with Vic [Martinez] - boom - he got hit in the toe and I had to go in the game. I think that’s where you have to pay attention.

“Whether it’s little things, positioning or baserunning, it’s what we communicate in March, April, May, June, so that we’re better at it in September and October.’’

Pickup game Alfredo Aceves toiled for parts of three seasons for the Yankees, but now that he finds himself on the other side of the rivalry, the righthander could figure prominently out of the bullpen, as he did in Saturday’s second game.

Aceves picked up the win in relief of Erik Bedard after taking the baton following a one-hour rain delay. He threw three innings of scoreless relief, allowing no hits and one walk with three strikeouts.

After going 14-1 with the Yankees, Aceves (9-1) became the first major league pitcher ever to win 23 of his first 25 decisions.

“Under the circumstances, with the rain delay, runner on base, guy in the middle of the count, he continues to put up zeroes,’’ Francona said.

Aceves has thrown 11 1/3 scoreless innings over his last six appearances out of the bullpen.

Fast times The Sox have 82 wins after 133 games. It’s the fastest they have gotten to 82 wins since 1978, when they did it in their 129th game . . . Lester has allowed one earned run or fewer in each of his last three starts, going 3-0 with a 1.69 ERA over that stretch . . . Dustin Pedroia’s first-inning wall ball in the nightcap was his 30th double of the season, marking his fourth season with as many. The only Sox second baseman with more is Bobby Doerr, who had six . . . David Ortiz’s second-inning homer in the nightcap was his 27th of the season and the 150th of his career at Fenway. Only four others have had more at the Fens: Ted Williams (248), Carl Yastrzemski (237), Jim Rice (208), and Dwight Evans (199).