Slugger has the OK to return to lineup tonight 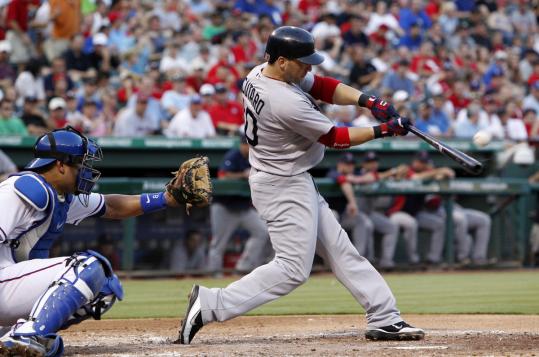 ARLINGTON, Texas - David Ortiz is set to return to the Red Sox tonight after missing nine games with bursitis in his right heel.

Asked what he planned to do, Ortiz smiled and said only two words:

Manager Terry Francona said team doctors had cleared Ortiz to play following a workout on the field before last night’s 11-5 victory against the Rangers.

With head trainer Mike Reinold watching closely, Ortiz ran from the left field foul line to shallow center field five times, increasing his speed each time. Then he simulated running to first base, taking a hard turn around the bag, and coming to a stop.

“I’m not any faster than that,’’ Ortiz said after returning to the cool climate of the clubhouse.

Ortiz was available to pinch hit last night but was not needed. He is hitting .300 with 24 home runs and 79 RBIs. Until the bursitis, he had not missed a game because of injury all season.

“He’s a big part of our lineup,’’ second baseman Dustin Pedroia said. “We need to get him back in there so we look like the same team again. David is having a big season.’’

Rookie chips in Rookie Ryan Lavarnway started his sixth consecutive game as the DH in place of Ortiz, going 2 for 5 with a double and one RBI. He is 7 for 22 (.318) with four walks and three RBIs.

The Sox have no immediate plans to use him as a catcher, but Lavarnway has been suiting up for drills almost every day since he was called up.

“We’re trying to use this to his advantage. He has free work days, that has to be a good thing,’’ said Francona, who added that the team would be comfortable using Lavarnway behind the plate. “He has to take advantage of that.’’

Lavarnway arrives at the ballpark around lunchtime to work with catching instructor Gary Tuck. He also sits in with Jarrod Saltalamacchia and Jason Varitek on their pregame meetings with the pitchers.

“I consider Jason the gold standard of the league,’’ Lavarnway said. “I’m talking to him as much as I can. Tuck told me today that expecting to be perfect behind the plate is reasonable and can be expected. I’m working towards that.’’

Asked how close he was getting to that, Lavarnway smiled.

“That’s for other people to decide,’’ he said.

Lavarnway divides his day between working on his catching skills and preparing for the game.

“I’m here to try and help the team win, first and foremost,’’ he said. “But while I’m here, I can learn as much as I can. The time for reflection is after the season, but I feel like I’ve learned a lot about catching.’’

With Ortiz coming back, Francona said that the Sox have a decision on Lavarnway.

On one hand, having an extra catcher with a good bat can help the team, and Lavarnway has impressed the Sox with his mature approach at the plate and his power.

But Lavarnway also would benefit from catching regularly with Pawtucket through the end of the season and in the International League playoffs.

“That’s something we have to think about and something we’ve already talked about,’’ Francona said. “I can tell you right now - nothing against the organization - I would rather us win than [Pawtucket].’’

Regardless, the Sox are planning to send Lavarnway to Venezuela for six weeks after the season to get more catching experience. He played in the Arizona Fall League last year.

“I want to make this team next spring,’’ Lavarnway said. “I’ll do whatever I have to do.’’

Setback for Kalish Pawtucket placed outfielder Ryan Kalish on the disabled list with inflammation in his right trapezius.

Kalish was 5 for 31 with 10 strikeouts in eight games since returning to Pawtucket Aug. 8. He last played on Saturday.

Kalish had been out since April after tearing the labrum in his left shoulder making a catch. He also had problems with his neck that delayed his return.

The lingering injuries could preclude Kalish from being added to the major league roster in September. Kalish may need surgery on his shoulder after the season.

Bradley debuts Outfielder Jackie Bradley Jr., one of the team’s top draft picks, made his professional debut with Single A Lowell. Batting second against Staten Island, he walked in his first plate appearance and later scored. Williams was the 40th overall pick in the draft after helping lead South Carolina to back-to-back NCAA championships . . . Lefthander Randy Williams, who made seven appearances for the Sox earlier this season, cleared waivers and was outrighted to Pawtucket . . . Former Celtics guard Rick Carlisle, the coach of the NBA champion Dallas Mavericks, threw out the first pitch to Texas manager Ron Washington . . . Francona went for an hourlong walk in the Texas heat before the game. He enjoys the kind of weather others find oppressive. “I love it,’’ he said. “I don’t like being cold. I’d rather sweat than be cold. If you had knees like this, you’d feel the same way.’’ . . . Dan Wheeler allowed a solo home run by Ian Kinsler in the ninth inning, ending his scoreless innings streak at 13 1/3 . . . The 11 runs were the most for the Sox at Rangers Ballpark since July 28, 2003 when they scored 14 . . . Marco Scutaro’s three RBIs were a season high.