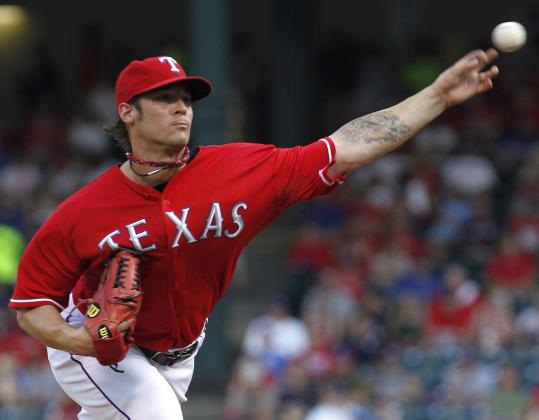 The Red Sox were unable to score off C.J. Wilson, who was pulled in the seventh inning. (Lm Otero/Associated Press)
By Peter Abraham Globe Staff / August 23, 2011

ARLINGTON, Texas - Tim Wakefield is going to get a chance to win his 200th career game at Fenway Park.

The Red Sox adjusted their rotation yesterday, scheduling Andrew Miller to face the Rangers Thursday and moving Wakefield back a day. He now will start against the Athletics Friday.

Miller (5-1) earned the start with a strong performance against Kansas City Friday night. The lefthander allowed one run on three hits over 5 1/3 innings with two walks and three strikeouts in a 7-1 victory.

Adding Miller to the rotation for another turn also gives every starter an extra day of rest during what has been a busy stretch. The Sox felt that was especially important for Jon Lester, who has thrown 345 pitches in his last three starts.

“We’ve really leaned on Lester pretty good,’’ manager Terry Francona said. “That gives everybody a little bit of [extra] rest. Everybody feels kind of good about it.’’

The Sox also hope the erratic Miller can build on the success he had against Kansas City.

“Sometimes you’ve got to maybe catch a break with the schedule,’’ Francona said. “I think it’s good. Sometimes you have to be a little creative. [Miller] is such an interesting guy. When he goes out and wins, that makes it a lot better.’’

It also looks like a fortuitous turn of events for Wakefield. The 45-year-old knuckleballer has been stuck on 199 wins since July 24. He is 0-2 with a 4.50 earned run average in five starts since, twice leaving games with leads only to see the bullpen fail to hold them.

Wakefield also has struggled against the Rangers in recent years, posting an 11.90 ERA in seven appearances since the start of the 2008 season. That includes giving up nine earned runs in 3 2/3 innings at Rangers Ballpark.

Oakland, which possesses the second-lowest batting average in the American League at .244, has a much more forgiving lineup. Wakefield will return to Boston ahead of the team Thursday to get a full night of rest.

Francona said the apparent advantages for the knuckleballer are merely a happy coincidence.

“There’s a lot of reasons [but] you can’t do it for sentimental reasons,’’ the manager said. “But I’m glad.’’

Ellsbury back today? Jacoby Ellsbury was out of the lineup for a third straight game as he recovers from a bruise on his back administered by an 88-mile-per-hour fastball from Kansas City reliever Everett Teaford Friday.

But the tentative plan is for Ellsbury to return today. He was at Rangers Ballpark early yesterday, took batting practice in the cage, and showed improvement.

Ellsbury was willing to start last night. But Francona took the decision out of the center fielder’s hands, saying he would sit out at least one more game to make sure.

“I think if we do that, he’ll be in good shape tomorrow,’’ Francona said.

“He did better,’’ Francona said. “If he keeps improving like he has, he’ll play tomorrow. He’ll be sore, but he’ll be able to play.’’

Ortiz steps closer David Ortiz missed his eighth consecutive game with bursitis in his right heel. But he took batting practice for the third straight day and today will try running on the field.

Ortiz felt fine swinging. “About the running thing, you’ve got to see how it reacts,’’ he said.

Ortiz is at a point, Francona said, where he’s being evaluated every day to determine when he can return to the lineup.

Drew has a plan The Sox have a plan in place that would return J.D. Drew to the roster Sept. 1. The right fielder has been on the disabled list since July 20 because a sore left shoulder.

Drew will start a rehabilitation assignment with Single A Lowell Friday at LeLacheur Park. After playing for the Spinners again Saturday, he will work out with the Red Sox on Sunday and take Monday off.

Drew then will play two games for Triple A Pawtucket at McCoy Stadium starting Aug. 30. Barring a setback, he would be activated Sept. 1.

By waiting until Sept. 1, when the rosters expand, the Sox will not need a corresponding move to fit Drew in.

“If something happened before that, he’d be ready,’’ Francona said.

Drew is hitting .219 with four home runs and 21 RBIs this season and lost his job to Josh Reddick before he went on the DL. But with Reddick’s batting average sliding, Drew could push for playing time once he returns.

Buchholz update Clay Buchholz, out since June with a stress fracture in his back, is at the fourth stage of a five-step rehab program that would clear him to start throwing again. He hopes to get the go-ahead next week and has not given up on the idea of pitching again this season. “Everything is definitely feeling a lot better than a month ago when I started this program,’’ he said. “Obviously, it’s working, but I hadn’t done anything else except that and go out and run around shagging BP, but I’ve tried to use that to the best of my advantage, because I wasn’t able to do that a month ago.’’ Given the long layoff, Buchholz may not have enough time left in the season to regain enough arm strength to return to the mound. If he does return, it could be out of the bullpen. “I’ve been trying to prepare to be available in whatever role they want me to do,’’ Buchholz said . . . Kevin Youkilis, on the DL with a strained back, has picked up the pace of his workouts in Boston . . . Bobby Jenks threw 24 pitches in a simulated game in Fort Myers, Fla. The righthander, who is also on the DL with a strained back, should be back around Sept. 1 . . . Native Texans Josh Beckett and John Lackey rented a suite at Rangers Ballpark for the series for their friends and family.

Michael Vega of the Globe staff contributed to this report. Peter Abraham can be reached at pabraham@globe.com. Follow him on Twitter @peteabe.