Now that he's a TV personality instead of a shortstop, the formerly tight-lipped Nomar Garciaparra has taken to talking. A lot.

Front and center on the set of ESPN’s Baseball Tonight show, flanked by a seasoned host and a fellow analyst, Nomar Garciaparra dominates conversation, never short on strong opinions or inside knowledge. The former Red Sox star, known when he was a player for being tight-lipped, is effusive and animated, breaking down playoff races in the Major Leagues, ticking off points with his fingers. He talks about player acquisitions and pitching staffs, about speed on the base paths and home run hitting. “It must be a good feeling when you hit the ball and you know it’s gone,” says Garciaparra. “I was always sprinting and had to wait for the umpire to tell me, ‘Hey, slow it down.’ ”

This is just the kind of been-there, done-that insight that Garciaparra, a six-time All-Star over 14 Major League seasons, gets paid for these days. And just the kind of insider perspective he was so reluctant to share as the Red Sox shortstop for nine years. In contrast to the rapping, acting, Twittering Shaquille O’Neal, who was just tapped for an on-air gig with TNT, no one would have predicted that Garciaparra would wind up in a broadcast booth. You can’t help wonder: How did “No Comment” Nomar reinvent himself as Howard Cosell?

“When I was playing baseball, it was all about playing baseball,” explains Garciaparra. “It wasn’t like, ‘C’mon over here. I’ve got something to say.’ It wasn’t what I was about.” After retirement, however, he was ready for his close-up. “Anybody who knew me while I was playing knew I could talk about baseball for hours,” he says. “Now I’m able to explain the game . . . as an analyst. I love the game, and I love talking about it.”

These days, Garciaparra, 38, looks and sounds every bit the professional communicator, dressed in a black suit and wine-colored paisley tie on a warm July night at ESPN’s headquarters in Bristol, Connecticut. This is a more relaxed man with newfound priorities – an analyst bantering back and forth with colleagues, a father raising twin daughters with wife Mia Hamm. “I wish I had done part of this while I was playing,” he concedes.

Garciaparra showed up at his ESPN audition in early March 2010 ready to learn a new craft.  To the assembled evaluators who had invited him for a tryout, he said: “Please let me know how I am. We’re in Connecticut, near New York City, and I’m used to hearing how bad I am” from trash-talking Yankees fans. “You’re not going to hurt my feelings.” Less than 18 months into the job, Garciaparra says he continually seeks constructive criticism, and he cringes when replays show him enunciating poorly or speeding through an important point.

Still, some things never change. Once a tightly wound player with an obsessive adherence to ritual, who painstakingly adjusted and readjusted his batting gloves during each at-bat, Garciaparra denies any new routine  –  paper shuffling? necktie tugging?  –  has replaced his old one. But according to one senior producer, Garciaparra spends several hours doggedly going through research, watching games, and compiling notes before every broadcast. “I want to make sure I’m prepared,” he says. “I figure I owe the people listening and watching that much.” Even if they can’t believe their eyes – or ears.

Shira Springer is a Globe sports reporter. E-mail her at springer@globe.com. 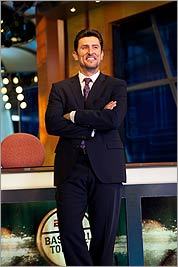