Playing it safe with Ellsbury 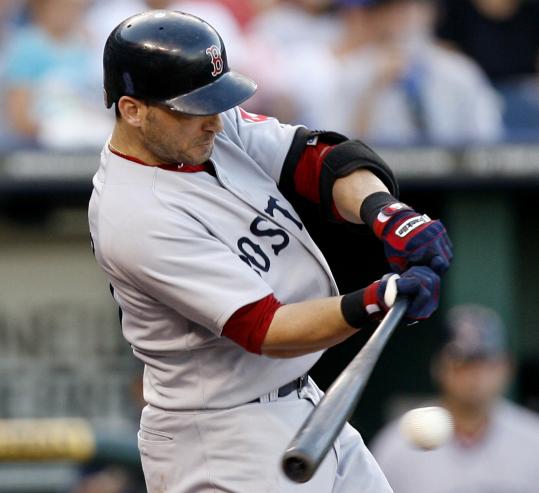 After missing five games with a sore back, Marco Scutaro was back at shortstop last night. (Ed Zurga/Getty Images)
By Peter Abraham Globe Staff / August 21, 2011

KANSAS CITY, Mo. - The Red Sox are being extraordinarily cautious with Jacoby Ellsbury, who was hit in the back by a fastball in the eighth inning Friday night.

The center fielder was taken for an X-ray after the game and yesterday had an MRI to confirm that he suffered nothing more than a bruise. Ellsbury did not play in last night’s 9-4 loss against the Royals and is not expected to play this afternoon.

“We’ll give him another day for sure,’’ manager Terry Francona said. “Pretty sore, he’s moving around OK. He’s trying to rally a little bit . . . I told him he wasn’t going to play.’’

After the contentious events of last season, when Ellsbury fractured several ribs in April and publicly disagreed with the team’s treatment of the injury, the Sox are being careful to maintain good relations with the player regarding medical issues.

“We checked him out pretty thoroughly,’’ Francona said. “Spoke to the doctors and he’s got a good old-fashioned big contusion. He got hit pretty hard. He’s actually been getting treatment all day.’’

Royals reliever Everett Teaford hit Ellsbury between the shoulder blades with an 88-mile-per-hour pitch. Ellsbury stayed in the game, advancing to third base on a double by Mike Aviles and scoring on a sacrifice fly from Adrian Gonzalez.

As a precaution, Ellsbury did not go back out to center field for the bottom of the inning.

Beyond saying he was “sore,’’ Ellsbury did not want to delve into the topic.

“We just did some standard tests and everything came out how we thought it would,’’ he said. “That’s really it. There’s nothing really more to talk about.’’

As to when he might play again, Ellsbury isn’t sure.

Ellsbury is having an MVP-caliber season, hitting .313 with an .887 OPS out of the leadoff spot. He has 22 home runs, 79 RBIs, and 33 stolen bases. Last night was the first time all season that an injury kept him out of the starting lineup. The fractured ribs injury last season also occurred in Kansas City, suffered in a collision with teammate Adrian Beltre.

Darnell McDonald started in center in place of Ellsbury. He was 1 for 3 with an RBI.

Back to hacks After five days of inactivity because of bursitis in his right heel, David Ortiz took some swings in the cage before the game. He took 20 swings off a tee and 20 soft toss.

Ortiz has been wearing a medical boot to decrease the pressure on his foot. He will keep that on for another day or two.

Francona was encouraged by the development. The Sox weren’t sure how long Ortiz would be out, but felt he did not need to go on the disabled list.

“He does feel good. We’ll start that progression. That’s really good news,’’ Francona said. “I don’t think you can put an exact timetable when these things happen.’’

It now appears Ortiz could play in the series against Texas that starts tomorrow.

Wheeler is rolling With Jonathan Papelbon, Daniel Bard, Alfredo Aceves, and Matt Albers ahead of him in the bullpen, the quality work of Dan Wheeler has gone relatively unnoticed.

Wheeler threw a scoreless eighth last night, giving him 11 2/3 scoreless innings over his last 10 appearances. Wheeler has a 1.47 earned run average and 0.88 WHIP since coming off the disabled list in May.

“Throwing strikes, getting outs, picking up some of those innings when we’re down a little bit [or] up a little bit. Give us a chance to stay in the game,’’ Francona said. “He’s been pretty much the model of consistency. Kind of what we thought we were getting.’’

Wheeler has been used mainly when the Sox are ahead or behind by a few runs. Albers and Aceves have pitched the more important innings in middle relief.

Albers gave up five runs on three hits and two walks last night, coughing up the lead in the sixth inning. That could push Wheeler into a more prominent role.

“The more pitchers you have that you can rely on, the better,’’ Francona said.

One good turn . . . Andrew Miller pitched well Friday night, allowing one run on three hits over 5 1/3 innings to get the victory in his first start since July 31. But he will return to the bullpen for now.

“We will slide him in for another start. We just don’t know quite when it’s going to be,’’ Francona said. “We want to see going forward how these other [starters] are doing, our schedule, if a guy needs a break and when is the best time to do it.’’

Fielder’s choice Mike Aviles, obtained from the Royals July 30, is 13 of 44 (.295) with the Sox. He has played shortstop, second base, third base, and right field.

“When you have one guy that you can bounce all over the field, it really helps,’’ Francona said. “It’s more than the numbers, because there are times when a guy doesn’t get hits. To a manager, it’s important.’’

High and low The Red Sox have the oldest roster in the majors (average age 30 years, 266 days) and the Royals the youngest (25 years, 346 days) . . . Kansas City has 43 outfield assists, the most in baseball. Left fielder Alex Gordon, a converted third baseman, has 19. Gordon, Melky Cabrera, and Jeff Francoeur have thrown out 21 runners at the plate, the most since the Phillies had 23 in 2001 . . . Dustin Pedroia kiddingly announced before the game that he was going to the Bahamas for a week on vacation. “I’m going to get tan like George Hamilton,’’ he said.