It was a big night for Papi

After a trying stretch, Ortiz swings into action 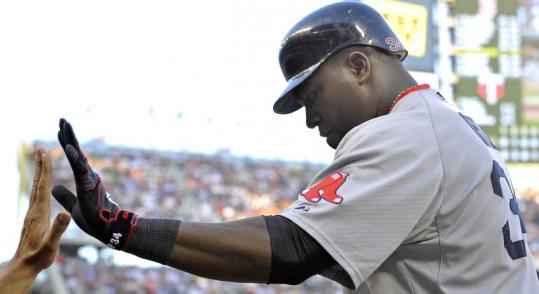 David Ortiz contributed four hits - including a two-run homer during a four-run sixth - in the Sox’ third straight win. He also drove in the winning run in the ninth. (Jim Mone/Associated Press)
By Nick Cafardo August 9, 2011

MINNEAPOLIS - Jarrod Saltalamacchia, who had a pretty fair game of his own - a home run and a double - was in awe watching David Ortiz’s at-bats from the on-deck circle last night.

“Any time a guy is hitting like that, you don’t know what to throw,’’ said the Red Sox catcher. “He hits your best fastball out of the park, hits a curve up the middle, and throw him something away and he hits it to left.’’

Ah yes, it was one of those throw-up-your-hands and tip-your-cap games for Ortiz. The big fella, who played his first six seasons in Minnesota, stroked four hits, including a home run and a double, to key Boston’s 8-6 win at Target Field. He also acted like a freight train and may have caused Joe Mauer to take his eye off the ball when the Twins catcher dropped an eighth-inning relay with Ortiz bearing down, allowing Ortiz to score Boston’s sixth run.

He led off the second with a single to center off starter Scott Baker. After he flew out to left in the fourth, he belted a 438-foot shot into the upper deck in right field for his 22d homer in the Sox’ four-run sixth. In the eighth, Ortiz stroked a leadoff double to left-center before eventually scoring to give his club a 6-5 lead.

The Twins came back to tie the game, denying Tim Wakefield his 200th win.

In the ninth, Ortiz collected another key hit.

With two outs, Adrian Gonzalez and Dustin Pedroia singled. Ortiz then stepped up and delivered another single to center, scoring pinch runner Darnell McDonald with the go-ahead run. Saltalamacchia doubled to drive in Pedroia with an insurance run.

Ortiz is hitting .295 with 74 RBIs. His .922 OPS is one of the best in the American League. After struggling in late June and early July, which included a stretch of interleague play and a three-game suspension for his altercation with Orioles reliever Kevin Gregg, Ortiz’s swing has returned.

Last week was a bit strange for Ortiz. He interrupted a Terry Francona press conference to moan about a scoring decision that cost him an RBI. It was very unbecoming and out of character for Ortiz. Players who moan about scoring decisions are usually self-centered and statistically driven. While Ortiz is playing for a new contract, did he need to fight that hard for one RBI? Then ESPN Deportes ran a story indicating Ortiz is unhappy the Sox haven’t started talks on an extension. All along, the Sox have told Ortiz they’ll talk to him at the end of the year. Last season they picked up his $12.5 million option. There’s no option to pick up now, but Ortiz wants to remain in Boston.

“I don’t think he wanted that out there,’’ said a friend of Ortiz, who plays for another team. “He’d love for the Red Sox to come to him and say, ‘Hey lets get something done right now.’ But if it doesn’t happen, he knows they’ll talk to him. How can they not? Look at the year he’s having.’’

Ortiz, like his teammates, didn’t get to Minneapolis until 5 a.m. and then came to the ballpark by 3 p.m.

“I keep telling you, this game is crazy,’’ he said. “One thing we know as baseball players is that sometimes when you don’t have all of your energy out there sometimes they’re the best games you have because you’re not trying to do too much. Sometimes it works, sometimes it doesn’t, but it worked today.’’

Imagine how much farther Ortiz’s homer could have gone if he had a little more rest.

But the hitting show was a treat for everyone, including his teammates, who continue to marvel at his exploits.

Ortiz didn’t seem overly exuberant about his night - just as he wasn’t going crazy during his well-documented slumps.

“It’s a long season, keep on working,’’ he said. “You play 14 years in the big leagues, you learn how to stay consistent.’’

It’s not often Ortiz is involved with significant running plays, but last night was one of them.

He was asked if Mauer heard footsteps and he said, “I don’t know man, but sometimes you get caught in situations where you’re expecting to be hit by the runner. I’ve seen it so many times. It wasn’t the case tonight. It’s hard to catch the ball and expect to get hit by the runner at the same time.’’

Ortiz then joked, “I think he heard the big elephant coming. He was shaking when I was coming in.’’

He then turned serious again.

“Most of the guys think about running the guy over in that situation,’’ Ortiz said. “They position themselves to do that. Next thing you know they’re out for season. It’s a hard play. I’ve seen so many times a guy gets crushed.’’

Ortiz got a refresher course from Tim Bogar right before the play.

“I was talking to our third base coach. He made me aware of what to do in that situation. If you see the infielder moving to the middle on a high chop you go to the plate. I focused on the high chop but sometimes it’s hard to read from third base. I wasn’t going on contact at all.’’

Whether it was with his bat or with his body, Ortiz was the show last night.

The Twins let him walk, and he continues to haunt the club - and its fans.

Ortiz acknowledges he still gets a little excited playing against his old team, but there’s no resentment.

“Not any more,’’ he said. “I’ve been gone for years already. In this business, sometimes you’re right and sometimes you’re wrong. The one thing I always say about the Twins organization is that I always thanked them for giving me the opportunity to come and play at this level. And one thing I always keep in mind when I played for the Twins is that they teach you how to play the game the right way. They teach to play hard and prepare you every day. And I can see that over the years . . . all the young guys they have over there, they have the same intensity.’’

But not necessarily the same success as Big Papi, who on any given night can still put on a hitting clinic that everyone stops to watch.