Save situation for Epstein

GM doesn’t give up best prospects 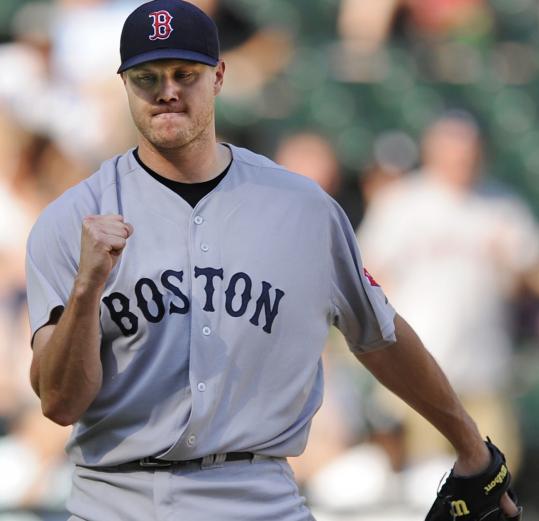 CHICAGO - Red Sox general manager Theo Epstein said he was willing to “dig deep’’ into the farm system to obtain a starting pitcher. But the four prospects used to extract Erik Bedard from the Mariners were not among the best in the organization.

Outfielder Chih-Hsien Chiang, catcher Tim Federowicz, and righthander Stephen Fife are organizational veterans who had to be placed on the 40-man roster by Dec. 1 or risk being lost in the Rule 5 draft. Their being traded helps to break up what was going to become a bit of a logjam.

Chiang is the best of the group. The 23-year-old outfielder was a middling prospect for five seasons before breaking out this season with Double A Portland. He was hitting .340 with 76 RBIs and 59 extra-base hits.

Federowicz, 23, is a defensively gifted catcher who has emerged as a hitter this season with Portland. But the Red Sox consider Triple A catcher Ryan Lavarnway a better prospect and have a number of younger catchers in the system with potential.

The former third-round pick is a solid prospect but not on the level of Anthony Ranaudo, Kyle Weiland, or Portland teammate Alex Wilson.

Rodriguez is a 22-year-old reliever who has spent this season with Single A Greenville.

The Sox also added to their bullpen depth in the minors by obtaining Josh Fields, a 25-year-old righthander, from Seattle.

Fields was the 20th overall pick in the 2008 draft out of the University of Georgia. He has been a disappointment to date, posting a 4.54 ERA in 81 career appearances.

Fields was promoted to Triple A Tacoma for the first time this season. In 13 innings over nine appearances, he allowed 10 earned runs on 11 hits with 13 walks and 13 strikeouts.

“Josh Fields is a big arm, a former high draft pick. His command has been erratic in pro ball,’’ Epstein said.

“I’m a big believer in the people that we have in our minor league system who work with our pitchers.’’

Concern on Buchholz Epstein would not provide details but did admit that “there is some concern’’ about the condition of Clay Buchholz, who will have his lower back examined by Dr. Robert Watkins today in Los Angeles.

“It’s been almost a couple of months now, which is longer than we expected it to be,’’ Epstein said. “We’re still awaiting some more feedback and another opinion. I think we have a feel for what might be going on. But Clay is seeing another expert to get his opinion and then we’re all going to put our heads together early this week.

Epstein said that Buchholz threw in the bullpen last Monday, and not repeating the session Wednesday was a problem.

“We think we’re in the process of getting to the bottom of it,’’ Epstein said. “We’ll have more to say after we talk to Clay.’’

Until now, the Red Sox have said Buchholz has a muscle strain. But there are increasing indications that he has a structural issue that will keep him out for the remainder of the season.

Ready to play Jed Lowrie returned to Boston with the team and will join Pawtucket today to start a rehab assignment. He will start at shortstop and hopes to play a few innings and build up from there.

“It has been a while since I played,’’ said Lowrie, who was placed on the disabled list June 17 with left shoulder weakness. “But I feel pretty strong,’’

Streaking along Adrian Gonzalez was 2 for 5 in the 5-3 victory against Chicago. He has hit safely in 10 straight games at 23 of 43 (.535). But more impressively, he has had two or more hits in seven consecutive games. Gonzalez is up to .357 and has 90 RBIs . . . The Red Sox have won seven consecutive road series in a season for the first time in their history . . . Andrew Miller’s eight strikeouts were a season high . . . Jonathan Papelbon has converted 19 consecutive save chances. He also has been near perfect in his last six games, allowing one hit over six innings with no walks and eight strikeouts . . . Jason Varitek’s home run in the second inning gave him 507 extra-base hits. That tied Nomar Garciaparra for ninth in team history . . . Marco Scutaro was 2 for 4. He is a career .385 hitter (55 of 143) against the White Sox.