All eyes to be on Lester tonight 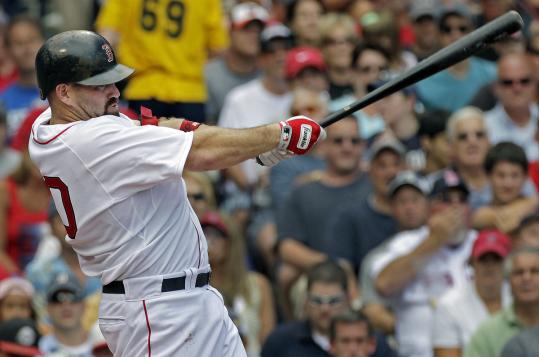 Kevin Youkilis launches a first-inning homer into the Monster seats that was caught in the last row by a fan who had a glove. (Jim Davis/Globe Staff)
By Michael Vega Globe Staff / July 25, 2011

Having said he expects to pitch without any impediment from the left latissimus strain that caused him to go on the 15-day disabled list July 6, Red Sox lefthander Jon Lester is eager to return to the mound tonight to face the Royals at Fenway Park.

“I don’t need [tonight’s] start to put it to rest,’’ Lester said Friday.

“We’ve tested it enough. I’ve had plenty of long toss, so it’s definitely not something that’s on my mind.’’

If that were the case, Lester said, “I wouldn’t go out there if it was still bugging me. It wouldn’t be smart.’’

Manager Terry Francona said the team will keep an eye on Lester, but he also didn’t believe Lester would be inhibited in any way.

Lester’s return is likely to result in the optioning of Kyle Weiland back to Pawtucket.

Of Lester (10-4, 3.31 ERA), who will oppose righthander Kyle Davies (1-9, 7.32), Francona said, “He’s come through this about as well as you could hope. He was completely pain-free when he started throwing and that’s what we wanted.’’

Lester left after four no-hit innings with five strikeouts in Boston’s 3-2 win over the Blue Jays July 5 at Fenway. The only Jay who reached was J.P. Arencibia, who walked to lead off the third inning.

Lester will be making his first appearance of the season against the Royals, a team against which he has gone 4-1 (1.22 ERA) in his career (including a no-hitter), allowing five earned runs in 37 innings.

“Now it’s about being able to build up endurance,’’ Francona said.

“We want to balance winning the game with bringing him along. When that bell rings, he’s going to forget about, ‘I’ve been down a couple of weeks.’

“He’s going to go out there and fire and try to win and that’s good, but we’ve got to keep an eye on him.’’

Manager grilled So how did Francona celebrate his 1,000th career win after Saturday night’s 3-1 victory over the Mariners?

Asked if he received much of a response, Francona took a jab at himself, saying, “The prevailing thought seems to be that people are surprised that I’m still here. I got that more than anything. I got some nice messages from people who mean a lot to me and that made me feel better than anything.’’

And yet, Francona remained humbled to become the 57th manager in major league history to record 1,000 wins.

“I think it’s kind of obvious that I was honored and I’m proud, but I’m a lot more comfortable talking about our guys and the team,’’ Francona said before yesterday’s 12-8 victory over the Mariners. “I just think that’s the way it should be.

“You’ve got to remember that it’s a round number, but then you’ve got to start looking at those other guys and maybe you need to hush up because there’s some guys with some pretty big numbers who are still managing.

“It’s actually kind of humbling, a little bit. It makes you realize how long they’ve been doing it and how hard it is to win.’’

Staying hot Dustin Pedroia extended his career-best hitting streak to 21 games, the longest in the American League this year, with a double off the wall in left-center in the sixth. It was the eighth double of Pedroia’s streak, during which he’s hit at a .385 clip. He’s reached safely in a career-high 33 consecutive games, the longest active on-base streak in the majors . . . Kevin Youkilis, who blasted his 14th homer of the season, is hitting .339 with 10 extra-base hits (7 doubles, 3 homers) and 15 RBIs in his last 14 games . . . Jacoby Ellsbury went 2 for 5 for his fourth straight multi-hit game and 12th in his last 19 games, over which he has hit .412 with 5 doubles, 2 triples, 7 homers, and 19 RBIs. His run-scoring single in the seventh gave him 18 RBIs for July, the most of any month of his career . . . Tim Wakefield, who recorded his 2,000th strikeout with the Sox when he got Mike Carp to fan on a foul tip to end the sixth inning, will be gunning for his 200th career win in his next start. “One step closer,’’ said the 44-year-old Wakefield. “I’ve been fortunate this year to pitch as well as I have. The last couple haven’t been that great, but they’ve been good enough.’’