An item for your datebook 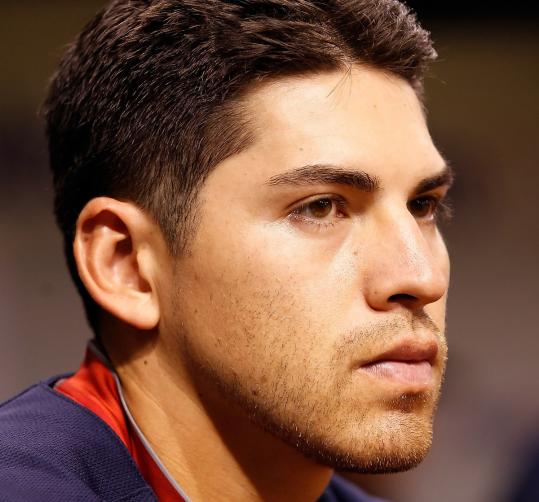 Take this to the bank: the Red Sox will play the New York Yankees at Fenway next spring on Friday, April 20, the 100th anniversary of Fenway Park.

On April 20, 1912, the Sox defeated the New York Highlanders (soon to become the Yankees), 7-6, in 11 innings in Fenway’s first major league game. Tris Speaker knocked in the winning run. Hope they let the fellows play a day game for the century birthday party.

■ Next time you feel like ripping Terry Francona, try to remember that the man has a lot on his mind. The manager’s son, Nick Francona, a former pitcher at the University of Pennsylvania, is a lieutenant in the United States Marine Corps, serving a six-month tour, leading a rifle platoon in Afghanistan. Twenty-six-year-old Nick is one of the more impressive young men you’ll ever meet. In a terrific piece for Grantland.com, Mike Barnicle asked Terry Francona how’s he doing as the dad of one of our soldiers at war. “I’m doing awful,’’ answered the manager. “My wife’s doing worse. I think about it all the time. Worry about it all the time. Hard not to. Try and stay away from the news about it. Try not to watch TV when stories about it are on, but it’s there, you know? It’s always there.’’

Francona is not one to make a big deal out of his son’s service to our country, but we need to remember that while we all go about our daily lives here in the States, there are families living on the edge while their loved ones are at war.

■Count me as Logan Mankins guy. He stood up to the Krafts. He came to camp in shape and made the Pro Bowl in a short season. He’s got the self-sufficient farm. I just have a hard time believing he broke away from the union yesterday. I’d prefer to think he’s part of the union’s plan to get more stuff in the closing hours of the talks.

■Friday night at Fenway should tell us a lot about the J.D. Drew situation. It’ll be the first time Francona has everyone available (Carl Crawford off the DL, David Ortiz back from suspension) and he’s going to have to decide whether to go with Josh Reddick or Drew in right.

■ Pardon me if I sound like Larry King, but what’s up with this Twitter madness? It strikes me as trendy, immature, and entirely unnecessary. What you had for lunch is of no interest to me. Increasingly, tweeting seems to be getting athletes in trouble.

Remember Rashard Mendenhall on Osama Bin Laden? The Raiders and Steelers on Hines Ward? All those players ripping Jay Cutler after the loss to the Packers? It’s just too easy to rip off an inane message of 140 characters and hit the “send’’ button.

I’m with Jon Stewart, hoping the whole thing is a fad. Granted, I thought the same thing about cellphones for a long time - resisting the device while secretly hoping it was a trend that would fade. Alas, the cellphone is here to stay and I caved when the boss made me take one five years ago.

Now Daddy Globe is threatening to make me tweet - at gunpoint. Why? The press box is already full of media folk tweeting instead of watching the game. Tweeting can’t be too hard; someone at the Globe sends this column out on Twitter so I have 306 tweets and more than 8,000 followers even though I have no idea how the thing works. Hope I never have to say my account was hacked.

■ If I were Lance Armstrong, I wouldn’t be saying anything to call attention to myself. And which cheater do you like in the Tour de France?

■ “Friday Night Lights’’ goes down as one of the best television programs of all-time. And HBO’s special, “The Curious Case of Curt Flood,’’ is spectacular.

■ Q and A with agent Scott Boras from the All-Star Game. On the public relations beating the Red Sox’ Jacoby Ellsbury took in Boston last season:

“When you look at time frames in baseball, they’re really registered around performance. I think as fans get to know Jacoby, they understand him and the discipline and what he does. [Last year in rehab from broken ribs] Jacoby was doing things that were done to make him the player that he is today. I think if the fans look back on this, they’ll understand that he is completely committed for his work and his career and the Red Sox. Certainly that allowed him to be in the position that he’s in now. I think all in all, as we reflect on it, everyone knows from his performance on the field, who he is and what he’s about. So there’s no reason to speculate on who Jacoby is.’’

Was Ellsbury hurt by the criticism?

“I think every player wants people to totally understand he’s 100 percent committed to what he’s doing. I think the best way to do that is to move forward. Now that he’s able to do that, I think there’s a great union between the fan base and Jacoby and I think the fans are willing to know him all the more and the influence he has on the team and what kind of player Jacoby Ellsbury really is. That’s all great news for Red Sox fans.’’

Did Boras ever think Ellsbury and the Sox would have to part company after the wasted year of 2010?

“I never thought that. We’ve got a really good relationship with them [amazing, given that Larry Lucchino called Boras a “liar’’ during the Mark Teixeira talks] and internally this thing is moving forward in the right direction. As long as those things were in place we knew this was a comfortable place for Jacoby.’’

Any talks regarding a contract extension for Ellsbury:

“We’re in midseason. We’re really about making sure the finish is as good as the start and getting through the year.’’

What about at the end of the season?

“It’s a hard thing to say. You always have to sit down and do a chronology of the situation and you have to talk to your client and go from there. We also have to find out what the team wants to do. I never speculate. I’ve had situations where people said teams are going to do A, B, or C. You never know what they’re going to do.’’

“Jason Varitek and Jeff Weaver didn’t do it. It really depends on the client.’’

Translation: Ellsbury is gone after 2013.