Not a lot of budging by Selig 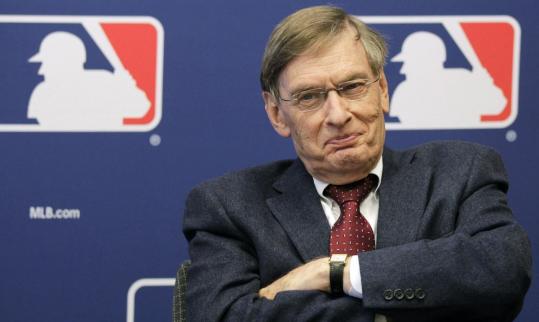 Despite having to deal with some thorny issues, Commissioner Bud Selig told baseball writers yesterday that the sport “has never been this popular.’’ (File/Reuters)
By Dan Shaughnessy Globe Columnist / July 13, 2011

PHOENIX - Old School was on parade late yesterday morning in a conference room on the second floor of the downtown Sheraton here. Seventy-six-year-old Commissioner Bud Selig, on the job almost 20 years, was on hand to answer questions for the Baseball Writers of America and it felt like we were all stuck in the 1950s.

It was a trip back in time as 70 mostly grizzled scribes (68 men and two women) from 29 major league outposts assembled to hear about the state of the game from Uncle Bud.

This was no new-media tweetfest. If lodge members had been better-dressed and better-looking, we could have been on the set of “Mad Men.’’ I blended nicely with my black “at a glance’’ telephone/address book and my clunky BLT-sized tape recorder. Nothing digital about this group. Our idea of social media is the old days of open bars in the press box.

Bud was up to the task. He meets with the writers every year at the All-Star Game.

He started off by telling us how swell everything is going. Bud loves all the pennant races and the comeback sea sons by the Pirates and Indians. He said “all of our economic barometers are very strong.’’ He bragged about attendance numbers, television ratings, gross revenues, MLB.com, and the MLB Network.

“The game’s never been this popular,’’ he said.

Without mentioning that the NFL and the NBA are both in lockouts, Selig said he’s optimistic about the next Basic Agreement, characterizing talks as “constructive.’’

Before taking questions, Selig wanted to clear up yesterday morning’s rumor that Major League Baseball was upset with the Yankees’ Derek Jeter for blowing off the All-Star Game.

“Let’s put the Derek Jeter thing to bed,’’ he started. “There isn’t a player that I’m more proud of in the last 15 years than Derek Jeter. He has played the game like it should be played. He’s even been a better human being off the field, as great as he is on the field, so any concerns that I keep hearing about Derek Jeter . . .

“I know why Derek Jeter is not here and I respect that and I think I might have made the same decision that Derek Jeter did. Any suggestion that I, or anyone else around here, is not happy with him, is just false.’’

At this juncture, I was compelled to interrupt the good vibe with a question about the ugly situation regarding South Boston’s Frank McCourt and the bankrupt Dodgers. How was this man allowed to buy the Dodgers?

“Seven or eight years ago we had long, complicated ownership processes,’’ Selig said. “Far more than we’ve ever had. It doesn’t mean we were always right, but when Fox sells the club to Frank McCourt, it then goes to the ownership committee. It then goes to the executive committee. It then goes to all 30 clubs and all the information is shared. And everybody looks at it. In fact, there was no other application submitted to us, and it was something Fox really wanted to get done. And so that’s the answer to your question.’’

In other words, everybody whiffed on this one and McCourt got the Dodgers because nobody else wanted them. Nice. Now it looks like Frank and his lawyers might remain holed up in Chavez Ravine forever, tying up MLB with infinite litigation.

From there he went back to talking about “hearing that players don’t want to play in the All-Star Game.’’ He said that’s nonsense. He pointed out that 79 of the 84 All-Stars made it to Phoenix (including injured players).

He agreed with Tigers skipper Jim Leyland that managers and umpires need to get along better. He said there’s not much interest in more replay, but look for some discussion about reviews of fair/foul balls hit down the line. He talked about new money coming to help the Mets, the struggles of the Oakland franchise, and the tragedy of a fan falling to his death in Texas. He cited Ted Williams’s appearance at Fenway in 1999 as a favorite All-Star moment. He said there are no plans for expansion, or contraction.

Selig admitted realignment is being discussed, reminding all of the misplaced outcry when the wild card was introduced in the 1994 season. He said interleague play drew 18 percent more fans this year. He said baseball embraces the designated hitter and is unlikely to change the NL and AL’s separate rules.

Selig admitted, “I’m the only one left in the American League - in December of ’72, I voted for the DH, which is shocking because I never voted for anything that Charlie Finley wanted.’’

He said he likes having the winner of the All-Star Game dictate home-field advantage in the World Series. “This has been good, no question about it,’’ Selig said. “People play harder and the games have been better.’’

Selig said he’s firm in his commitment to retire when his contract expires in a year and a half.

Is he prepared to go to Washington if he’s called to testify in the Roger Clemens perjury trial? “If they call me, I guess I’ll have no choice but to go, but I’ve heard nothing,’’ he said.

Does he feel any sadness about the Clemens trial playing out while baseball celebrates with the Home Run Derby and the Midsummer Classic?

“There’s always situations which you wish didn’t exist, but it does,’’ he said. “I always worry about things like that, you know. Three, four, five years ago people were saying, ‘You have all these dark clouds hanging over your head.’ But attendance kept going up dramatically and everything else kept going up. I seem to be the only one worrying about it. In life, you’d rather have things not happen, but I’m not concerned.’’

That’s the life of Bud. All is well. Just like in the good old days.