Trial arguments to start this week 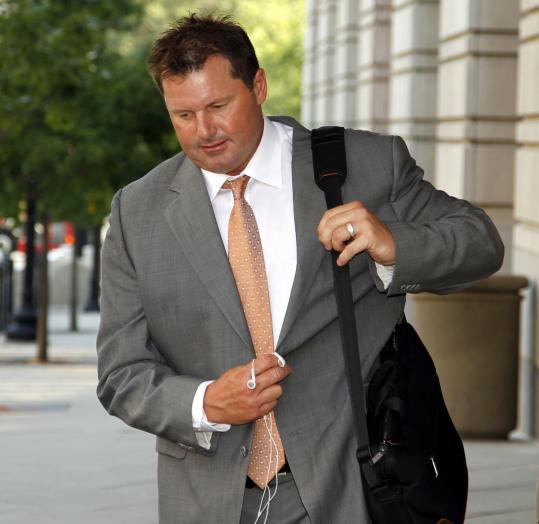 WASHINGTON - Roger Clemens will stride into the E. Barrett Prettyman Federal Courthouse today, probably flanked by his wife and followed by cameras, in a scene that will be repeated in coming weeks, making his days as a dominant Red Sox pitcher seem even more distant.

He is a legend turned court-TV spectacle, a stubborn defendant staring down the government and possibly prison.

“It went from bad to worse to ‘Oh, my God,’ ’’ Peter Carfagna, a Harvard Law School lecturer, said of the free fall that has Clemens fighting perjury charges.

In opening statements this week, prosecutors will lay out their case that Clemens knowingly took performance-enhancing drugs during his record-setting major league career, then lied to Congress when he denied steroid use. He said he received B12 vitamin shots, not steroids.

More than 100 people are listed as possible witnesses for the prosecution, including famous former players such as Barry Bonds, Jose Canseco, Mark McGwire, and Sammy Sosa. Former Clemens teammates such as Wade Boggs of the Red Sox and former Yankees pitcher David Cone may appear for the defense. Some may testify, while others will simply be referenced during a trial that is expected to last four to six weeks.

If Clemens, 48, does not testify in his own defense, then the credibility of McNamee becomes “the linchpin of the government’s case,’’ said former federal prosecutor Michael N. Levy. McNamee has said he injected Clemens with steroids and human growth hormone. The trainer provided federal authorities with physical evidence intended to back his claims. Former Clemens friend and teammate Andy Pettitte also is expected to provide crucial testimony for the prosecution, supporting McNamee’s version of events.

“At the end of the day, this is Brian McNamee saying ‘I injected Roger Clemens with steroids, and he knew exactly what I was doing,’ ’’ said Levy, now a Washington criminal defense lawyer at Bingham McCutchen. “And it’s Rogers Clemens saying, ‘No, he didn’t.’ The question becomes: Does the jury believe Brian McNamee beyond a reasonable doubt or not? Every other piece of evidence is going to be designed to support or negate those two basic arguments.’’

Based on pretrial hearings, the defense is expected to claim that McNamee, fearing the financial fallout of being involved in a 2001 rape investigation, planned to blackmail Clemens. As part of that scheme, the defense probably will argue, McNamee manufactured physical evidence - steroid-tainted syringes and gauze pads with Clemens’s DNA.

“The defense is going to do whatever it can to show that the witnesses against Clemens are not credible,’’ said Robert Bloom, a Boston College Law School professor who teaches criminal procedure. “They’re going to throw up a lot of smoke.’’

Carfagna, who teaches a course on representing professional athletes, said: “I would call it a suicide strategy. If it doesn’t work, it could totally backfire. If McNamee is credible on that which is relevant, it appears like, ‘Now, let’s distract the jury and hope they pay attention to the circus over here that he’s a blackmailer.’ ’’

Carfagna and other legal specialists believe the jurors will be savvy enough to separate significant testimony and evidence from potential distractions.

If Clemens testifies, then the trial dynamics shift as the jury considers the pitcher’s credibility above all. Undoubtedly, Clemens and lead defense attorney Rusty Hardin have weighed the pros and cons of placing the seven-time Cy Young Award winner on the stand. The defense can wait until just before it rests to decide whether Clemens will testify. At that point, the defense can best assess how effectively its case has been presented.

Ultimately, the final decision rests with Clemens, whose eagerness to testify under oath before Congress led to his current legal predicament. The charges against Clemens - three counts of making false statements, two counts of perjury, and one count of obstruction of Congress - stem from his testimony during a nationally televised hearing before the House Committee on Oversight and Government Reform in February 2008 and in earlier interviews with House investigators.

“I would be really surprised if he takes the stand,’’ said Bloom. “I think the lawyers would say, ‘Don’t take the stand.’ Because if he does, he’s opening himself up to all kinds of other things, to many more opportunities for the prosecution to show he’s lying.’’

If convicted, under sentencing guidelines for someone with no criminal history, Clemens faces 15 to 21 months in prison.

But US District Judge Reggie B. Walton is known for giving tough sentences, legal analysts say. He presided over the 2007 perjury conviction of I. Lewis “Scooter’’ Libby, Vice President Dick Cheney’s chief of staff, and ordered a 30-month prison term. President George W. Bush called the punishment excessive and later commuted the sentence.

“Judge Walton does an excellent job of controlling his courtroom,’’ said Levy, who argued before Walton in the 1990s as a federal prosecutor. “He oftentimes gives the defense the benefit of the doubt in the conduct of a trial where there are close questions. If the jury convicts somebody, he feels that much more confident in the verdict and does not hesitate to mete out significant sentences where he thinks they’re warranted.’’

The Clemens case follows the perjury trial of Bonds, who faced charges he lied to a federal grand jury about steroid use. This spring in San Francisco, a jury convicted Bonds, the career leader in home runs, on one count of obstruction of justice. The presiding judge declared a mistrial on three other charges that Bonds made false statements.

Like Clemens, the charges against Bonds concerned whether the slugger knowingly received steroids and then lied about it. But the similarities end there. Bonds was subpoenaed to testify before the grand jury. His longtime friend and trainer, Greg Anderson, spent the trial in prison for contempt because he refused to testify, making some evidence inadmissible and weakening the prosecution’s case.

Still, the Bonds verdict underscores the difficulty of prosecuting perjury trials involving alleged lies about steroid usage. Not only must prosecutors prove Clemens knew he had taken performance-enhancing drugs when he told Congress, “Let me be clear: I have never taken steroids or [human growth hormone],’’ but they may encounter some antigovernment sentiment.

“The difficulty for the prosecution is that this is not a major drug dealer, not a terrorist, not Bernie Madoff,’’ said David Rossman, a BU School of Law professor and criminal defense attorney.

But even if Clemens avoids conviction, the legal victory is not likely to influence the court of public opinion.

“The entirety of his legacy is put at risk by taking this grand offensive that he will be exonerated,’’ said Carfagna. “He may win the war, but he’s lost so many battles along the way.’’

Shira Springer can be reached at springer@globe.com