Youkilis eager for his star turn 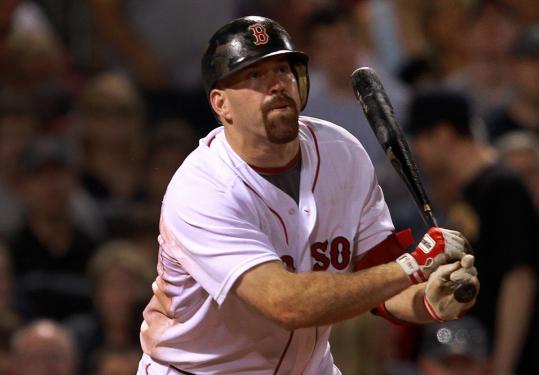 Kevin Youkilis follows the flight of his RBI double in the seventh, his second such hit of the night. (Barry Chin/Globe Staff)
By Michael Vega Globe Staff / July 10, 2011

A week ago, when he was not among the four Red Sox players selected to represent the team at the 2011 All-Star Game, third baseman Kevin Youkilis was looking forward to the time off to rest his battered body.

So when Theo Epstein approached Youkilis after the Sox’ 10-3 victory over the Orioles Friday and informed him that he had been selected to replace injured Yankee Alex Rodriguez, the first thing the general manager asked was if Youkilis was up to playing. Epstein didn’t have to ask twice.

“I said I was feeling better and I would love to,’’ Youkilis said. “I would be honored, so I decided to go.’’

Because Rodriguez was a fan-elected All-Star, Youkilis was selected for this third appearance by American League manager Ron Washington.

“It’s been one of those first halves where I’ve had to really, really grind as much as possible to get to where I am today,’’ Youkilis said. “It hasn’t been easy with all the little bangs and bruises, but that’s part of baseball. You’re going to get nicked and you’re going to get knocked down and there’s things that are going to ache you every day.

“But it was great just to be able to be the next guy in line to go to the All-Star Game,’’ said Youkilis, who will depart for Phoenix along with David Ortiz, Adrian Gonzalez, Jacoby Ellsbury, and Josh Beckett after today’s game.

Tests for Beckett Beckett did his normal postgame work and played catch yesterday, but manager Terry Francona said he would likely be checked out after a side session today.

“We’ll kind of reevaluate him from there, not just for his start going forward with us, but with All-Star ramifications,’’ Francona said. “We don’t want to hold up the league. So he’ll go out early . . . and if he’s OK, he’s OK.’’

Jeter saluted The news of Derek Jeter’s 3,000th hit - coming on a home run, no less - was welcomed news in the Sox clubhouse, with several players doffing their caps to the Yankees’ captain.

“If you like baseball, he’s a lot of what’s good with baseball,’’ Francona said. “He respects the game. He plays the game right. He makes me proud for the way he goes about his business.

The fact Jeter became the first Yankee to record 3,000 hits surprised some in the clubhouse.

“I didn’t realize he was the only Yankee to get 3,000 hits,’’ Jonathan Papelbon said. “It’s very impressive.’’

“He’s pretty much been a superstar since Day 1 that I’ve been in this uniform playing against him,’’ said Jason Varitek. “He’s carried himself that way and he’s played that way. There’s a reason he’s got 3,000 hits.’’

Not guilty plea Jarrod Saltalamacchia said he was baffled as to why he was ejected from Friday night’s bench-clearing brawl. “I didn’t even take a swing at anybody,’’ he said. When he was apprised that none other than Marco Scutaro, all 5 feet 10 inches and 185 pounds of him, was a first responder in the brawl and took on 6-6, 230-pound Kevin Gregg by jumping on his back, Ortiz laughed. “When he jumped on his back he looked like his backpack,’’ he said . . . The Sox will send 24-year-old Kyle Weiland to the mound today for his major league debut. Josh Reddick, who played with Weiland at Triple A Pawtucket, said, “He’s got great movement on his stuff. From what I hear, he’s got a cutter now, but his fastball and his curveball are amazing. The curveball comes out of the batter’s box and comes back all the way on the right side.’’

Monique Walker of the Globe staff contributed to this report. Michael Vega can be reached at vega@globe.com.