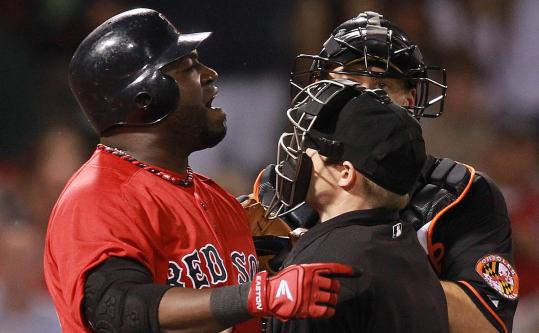 Once the dust had settled from his altercation with reliever Kevin Gregg in Friday night’s 10-3 victory over the Orioles at Fenway Park, David Ortiz found himself at Jerry Remy’s Sports Bar & Grill with his Red Sox teammates for a surprise birthday party for Daniel Bard.

All around him, on the high-definition televisions that rimmed the restaurant, replays of the eighth-inning, bench-clearing brawl - sparked by Ortiz’s toe-to-toe swingfest with Gregg - kept playing on an incessant loop.

Asked if he won his kindergarten bout, Ortiz smiled and said, sheepishly, “I don’t think so.’’

Although his teammates gave him a good-natured ribbing over the incident, which got him ejected and will likely draw further sanctions, including a suspension from Major League Baseball, Ortiz knew his actions went against his nature.

“It was good that nothing really bad happened,’’ said Ortiz, who narrowly missed landing a huge left on Gregg’s chin after dodging a right cross from Gregg. “At the end of the day, we’re not here to do that stuff; we’re here to play the game the right way, the way it’s supposed to be. To tell you the truth, me personally, I don’t feel good when things like that go down. That ain’t really me.’’

That point hit home when Ortiz returned home and faced questions from his children.

“My kids had tons of questions for me last night: ‘Daddy, why were you fighting?’ ’’ Ortiz said before last night’s game. “I don’t want to be having that conversation with my kids, because I’m not an aggressive person. But, like I said, it’s in the past and it’s behind us and it’s another day today.’’

Asked if he expected to be suspended, Ortiz said, “I know MLB will take some action and everybody’s aware of it. It all depends on what they want to do with it. But I wasn’t the one who started it. I don’t think I was, you know?’’

Gregg offered no apologies Friday night, defiantly standing behind his actions, calling the Red Sox whiners who “think they’re better than everybody else.’’ Saying he had every right to pitch inside to Ortiz, Gregg fired three straight inside pitches, the third nearly hitting the Sox slugger on the hip, which cleared the benches when Ortiz stomped toward the mound.

“He’s a guy who I’ve always faced and he’s never pitched [me] in,’’ Ortiz said. “He threw a whole bunch of pitches inside and I’m sure he was trying to hit me. No question about that.’’

After Ortiz hit a lazy fly ball to center and slowly began trotting to first, Gregg came off the mound and yelled at him to get down the line.

“I’m not going to take that like a little [expletive], you know what I’m saying,’’ Ortiz said. “You saw the argument before and afterward you’re going to act like you’re my daddy or something like that? I ain’t going to take that. If you want to have respect, you got to respect [others].’’

The bad blood between both teams seemed to percolate before the start of the season when, during spring training, Orioles manager Buck Showalter made disparaging remarks about Theo Epstein and the Sox’ payroll in a magazine article. When the Red Sox erupted for eight runs in the first inning Friday night, it only seemed to make matters worse.

“I’m just a guy who likes to play the game the way it’s supposed to be, and that’s about it . . . I’m not saying that we are better than what they are; I respect everybody around the league,’’ Ortiz said. “I don’t disrespect nobody. I don’t care who you play for, who you are, how long you been around. I respect everybody the same way.

“So don’t go blaming it on, ‘You guys think you’re better than us,’ and this and that. I have a lot of friends on that ballclub and I don’t like them to be going through a situation like that. This is horrible. But it’s not like we’re trying to show up anybody. We just play the game.’’