Veteran is traded for player or cash 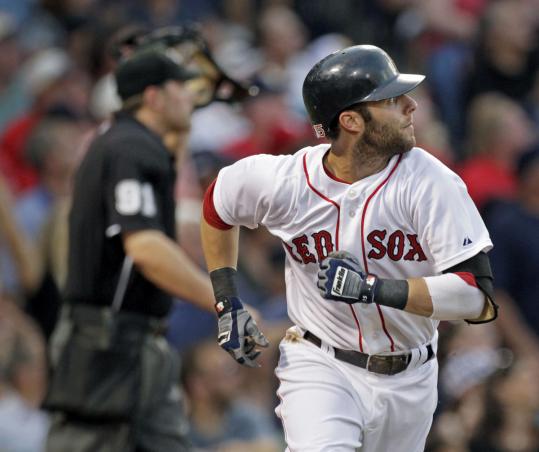 The departure of Mike Cameron will not be a total loss for Red Sox. The outfielder was traded to the Marlins yesterday for a player to named or cash.

According to a major league source, the Red Sox will cover $3 million of the approximately $3.6 million Cameron is owed this season.

The 38-year-old Cameron was designated for assignment last Thursday after hitting .149 with three homers and nine RBIs over 33 games.

Although the Marlins are well out of contention at 38-48, they have playing time available in the outfield and Cameron would figure to be a good role model for players such as Mike Stanton and Logan Morrison.

Cameron also has experience with Marlins manager Jack McKeon, having played for him in 1999 in Cincinnati.

Gonzalez honored Adrian Gonzalez was named the American League player of the month after hitting .404 with 16 extra-base hits and 25 RBIs in 25 games in June.

The last Red Sox player to win the honor was David Ortiz in May of 2010.

Gonzalez and Ortiz will be in the Home Run Derby, joining Jose Bautista and Robinson Cano on the American League team. That roster was set yesterday.

They will compete against Prince Fielder, Rickie Weeks, Matt Holliday, and Matt Kemp Monday in Phoenix. Ortiz is the defending champion.

Gonzalez, who has 16 home runs this season, is looking forward to seeing Ortiz in action as captain.

“He’s a great captain. He’s definitely the guy who can lead us. It will be fun,’’ Gonzalez said.

Youkilis sits out Kevin Youkilis was out of the lineup, the result of being hit in the back by a Brandon Morrow pitch Monday. The ball hit Youkilis beneath his left shoulder near his neck and led to his having headaches.

“It’s not like a concussion. It won’t linger,’’ said Youkilis, who expects to be back today. “It’s not like a serious headache. It’s more like tightness going up to my head.’’

Youkilis already was playing with two sore ankles and assorted other bumps and bruises.

“It’s part of the season. You get bumped around. A lot of stuff happens,’’ he said. “You try and get as healthy as you can. Fortunately the All-Star break is coming here soon. Those four days will help.’’

Youkilis said getting off his feet during the break would serve him well.

“I think for everyone, four days of not pounding on your body, moving around and wearing cleats . . . that’s the biggest thing. If you get your feet off cleats for three or four days, you tend to find out how great it is to just wear shoes all day,’’ he said. “Just sitting back, resting and relaxing is big.’’

Youkilis has been hit nine times this season.

“It’s part of the game,’’ he said. “Sometimes it’s an accident; sometimes people throw at you for no reason. It just happens. There are a lot of mistakes.’’

Crawford is closer Carl Crawford took early batting practice and did a series of vigorous base-running drills to test his strained left hamstring. He has been on the disabled list since June 18.

“He had a really good day,’’ said manager Terry Francona. “That’s been about three days in a row now. Just keep letting him do that. I would think maybe in the not-too-distant future we’ll be talking about him coming back. When that is, I don’t know.’’

With only five games remaining before the All-Star break after last night, the question is whether to bring Crawford back for a game or two or let his rehab continue.

“If he was ready on Sunday, we probably would wait,’’ Francona said. “That’s the only way. If he’s ready before that, I’m sure [GM] Theo [Epstein] and I need to sit down and talk to Carl, which we will do.’’

Playing it safe Clay Buchholz will board a flight to Charlotte this morning and has an 8 a.m. appointment with Dr. Craig Brigham, a back specialist. The appointment will serve dual purposes. It will determine whether the righthander has anything beyond a muscle strain and, if that is not the case, reassure him that he can return to the mound without the fear of suffering a greater injury. “We want to make sure that if he pitches, because he’s probably going to be sore for a while, that he’s not hurting himself,’’ Francona said. “I think not only for his sake, but for ours. You want to make sure you’re not missing something. That’s why you do these things.’’ . . . Jed Lowrie, out with a sore left shoulder, is taking ground balls but has not yet returned to hitting.

Bard rolls on Daniel Bard threw a scoreless eighth inning in last night’s 3-2 victory against the Blue Jays. He has not allowed a run in 16 1/3 innings, his career best . . . Dustin Pedroia has homered in four consecutive games hitting cleanup, the first two games coming in 2008 . . . Former Sox shortstop Don Buddin died in South Carolina. He was 77. Buddin signed with the Sox in 1952 and made his debut in 1956. He spent five seasons with the Sox, hitting .244 with 39 home runs. He had his best season in 1961 when he hit .263 and drove in 42 runs. The Sox traded Buddin to the Houston Colt .45’s before the 1962 season for Eddie Bressoud . . . Umpires Jeff Nelson, Marty Foster, and Bill Welke will visit Children’s Hospital Boston on Friday along with Wally the Green Monster. The visit is sponsored by the Umps Care program.